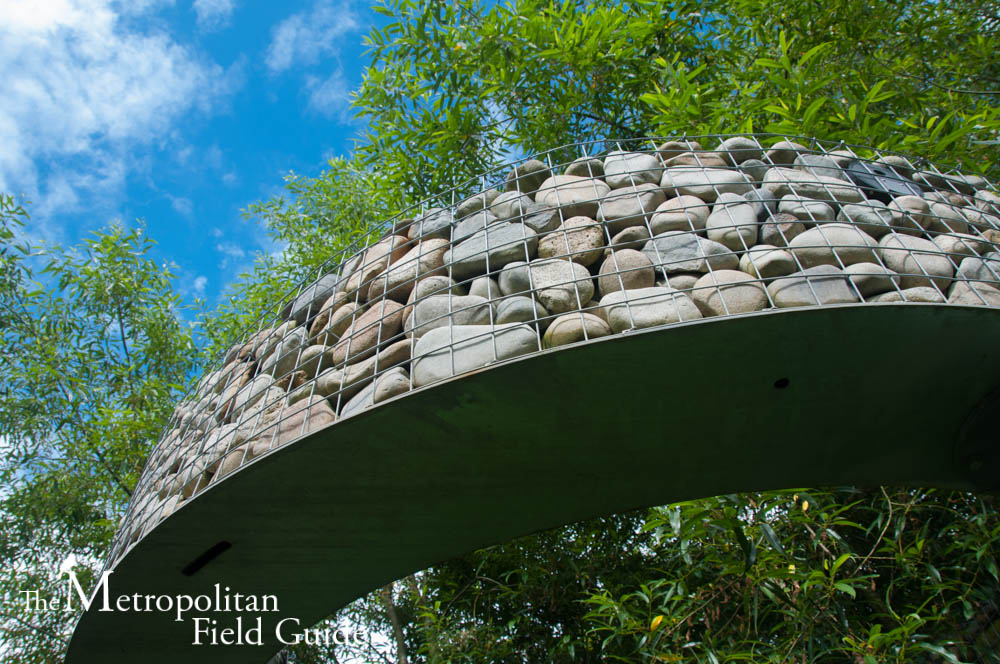 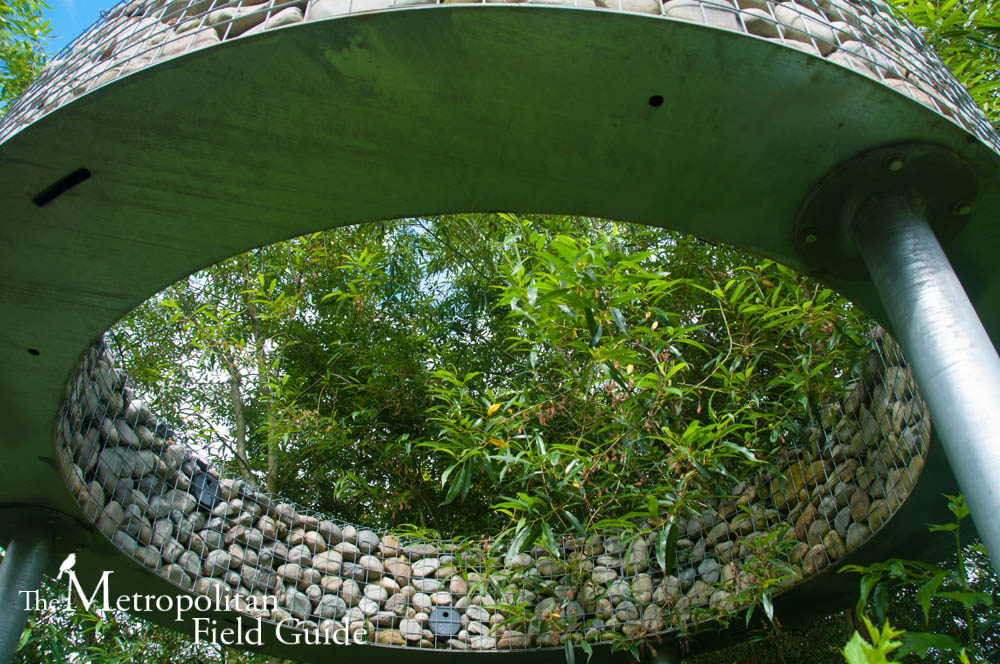 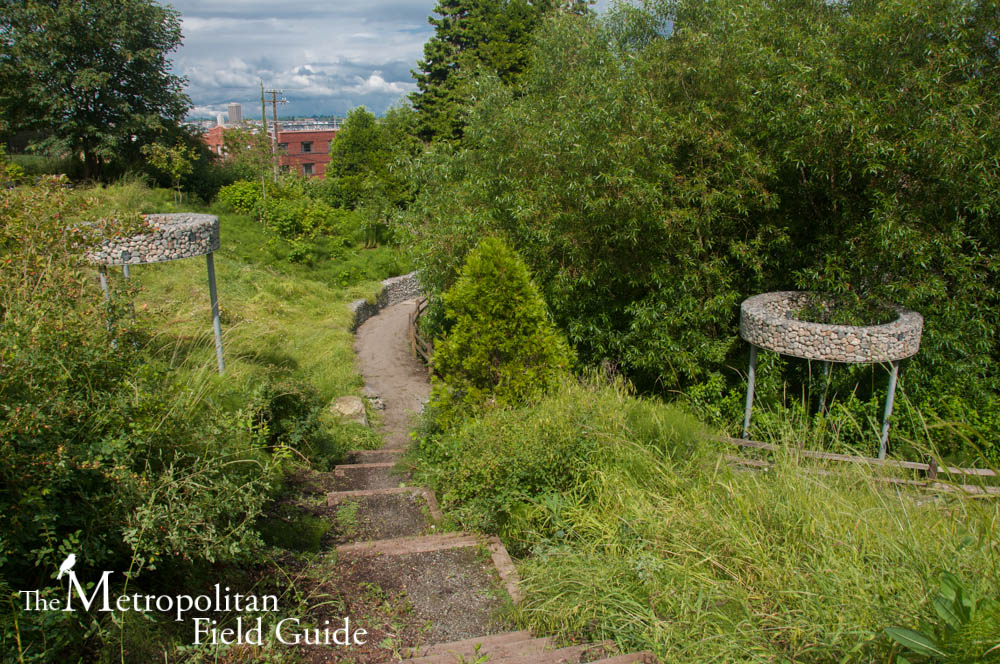 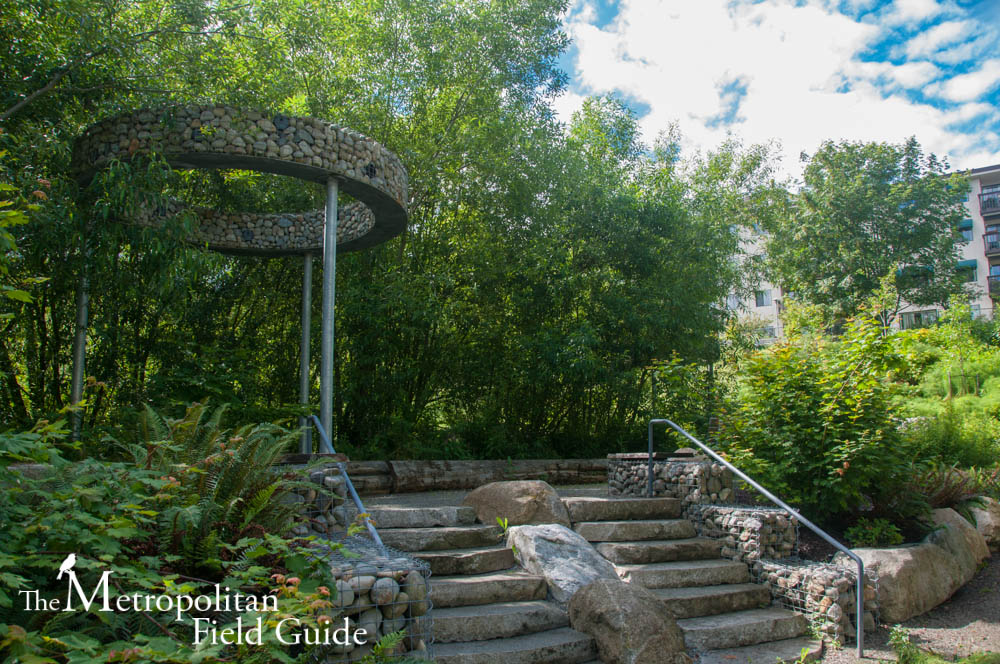 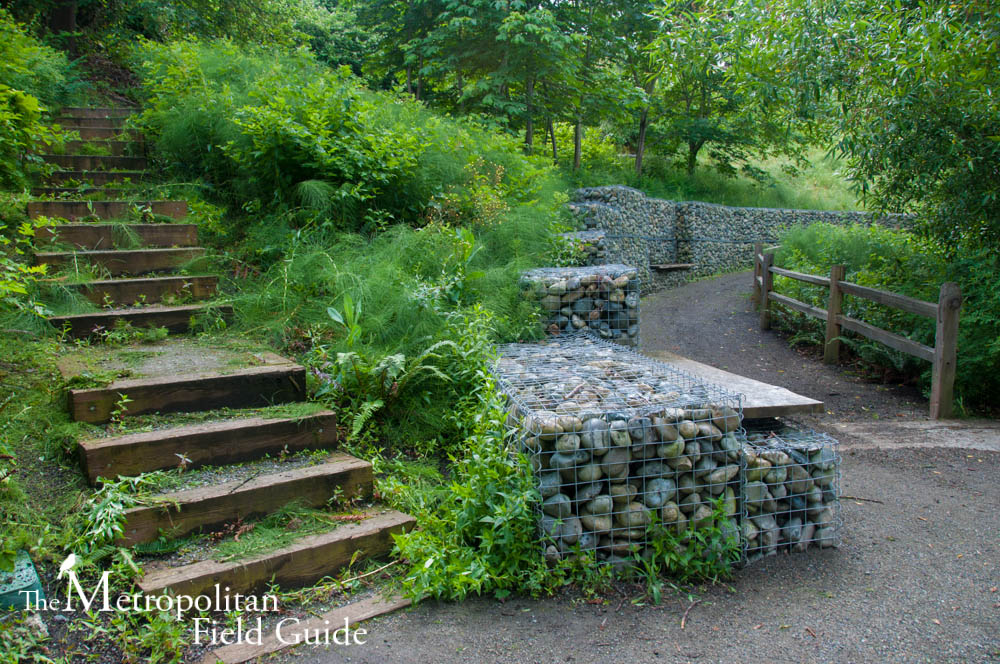 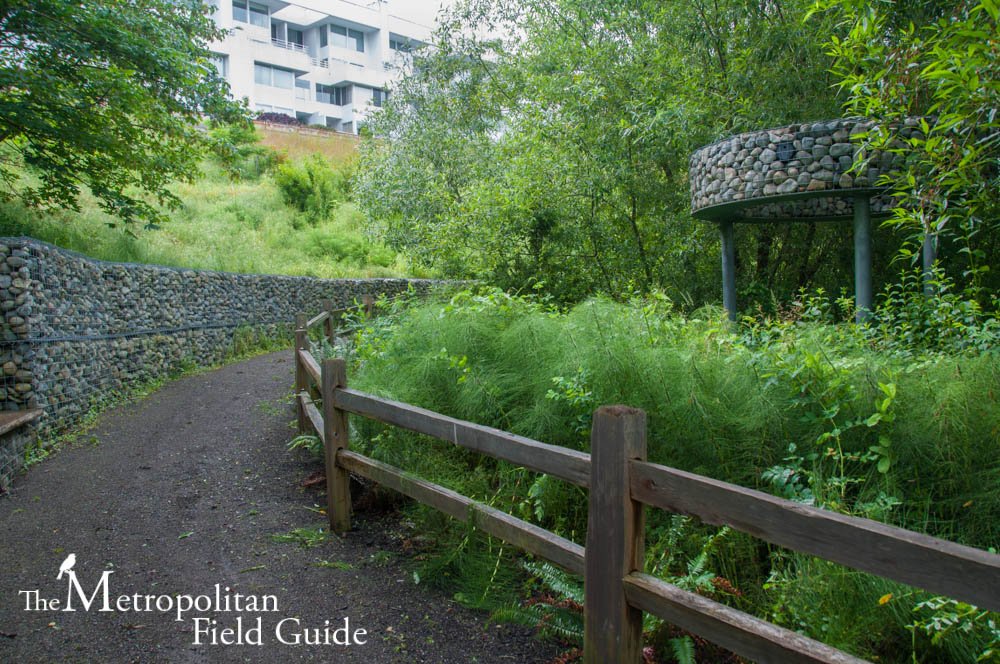 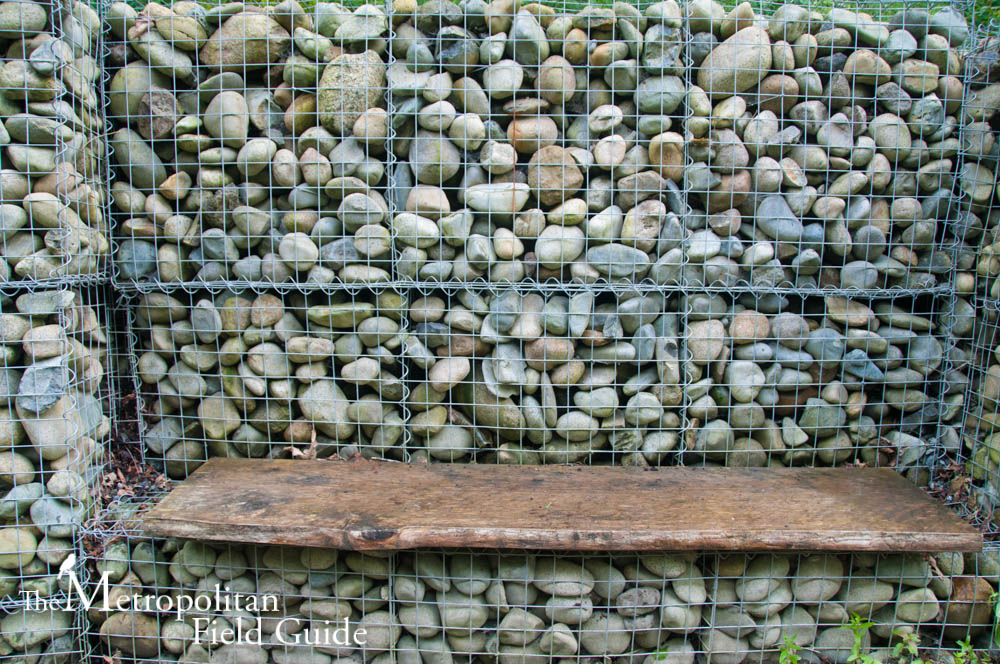 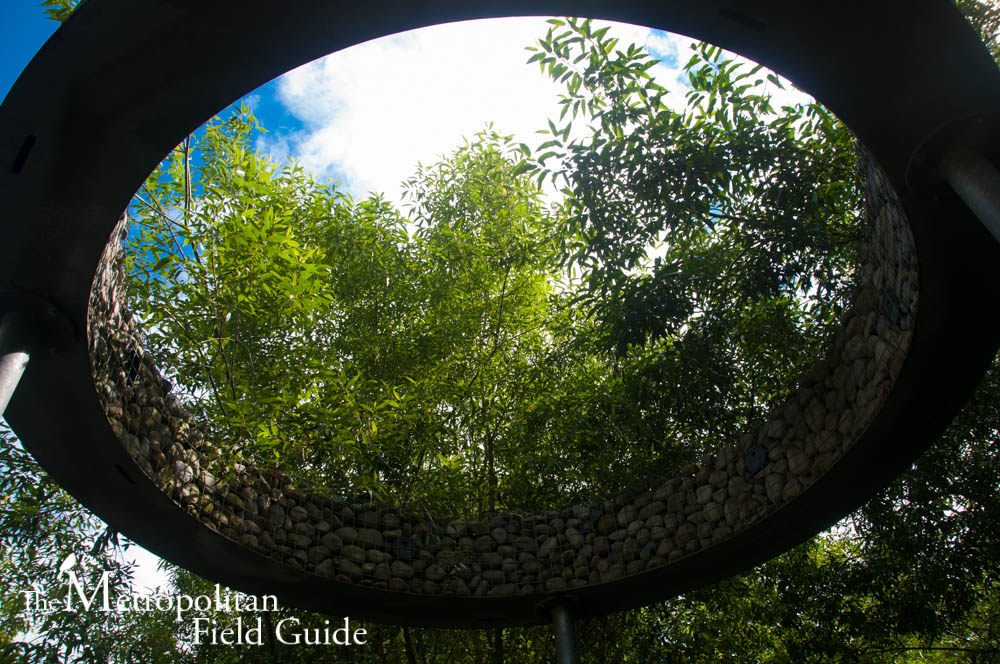 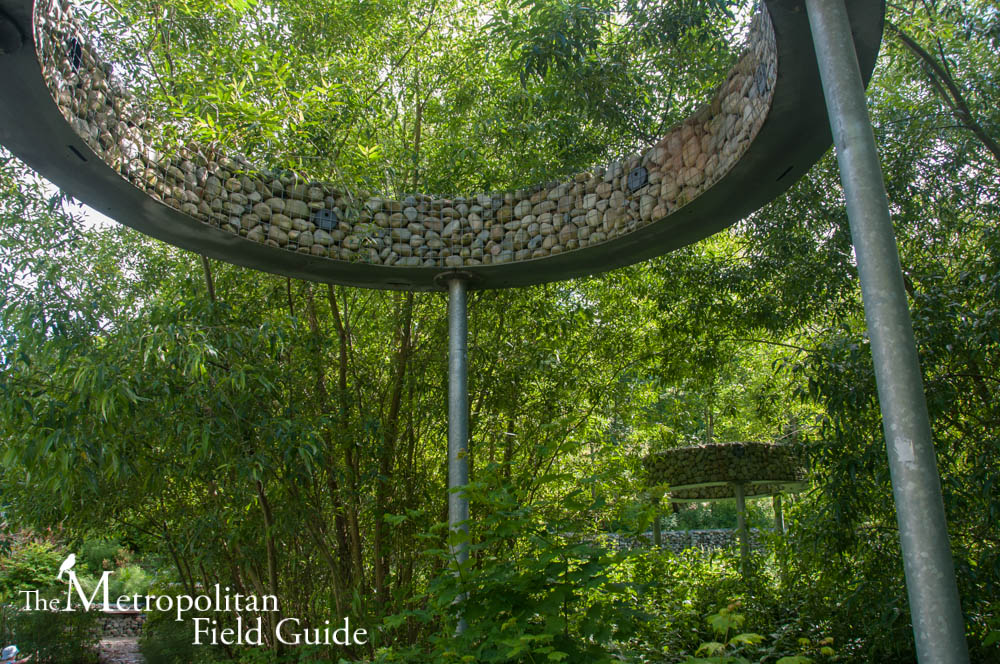 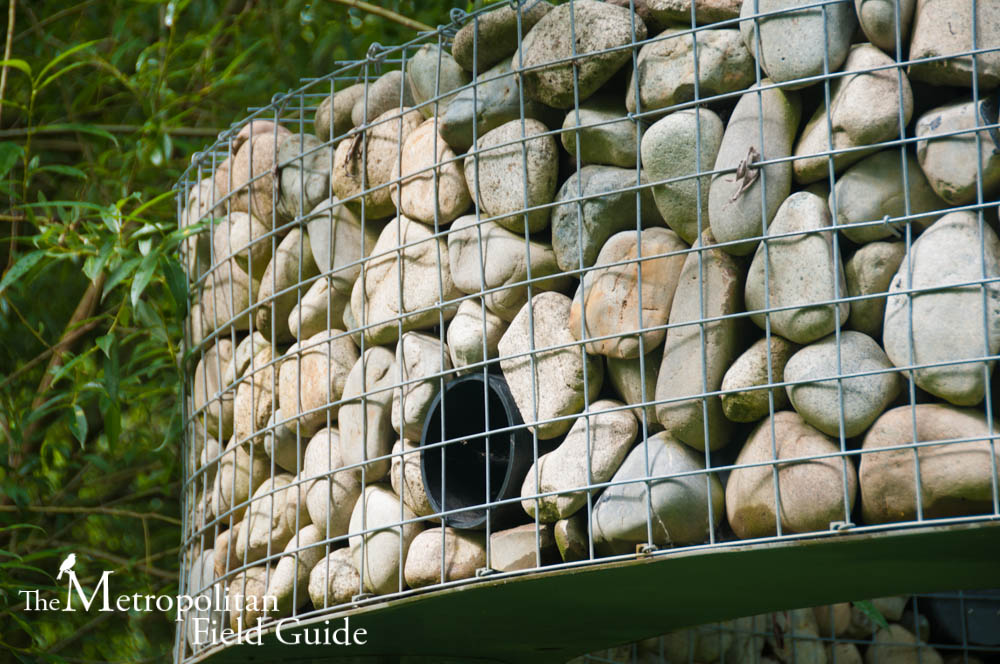 Located in Seattle’s Queen Anne neighborhood, the Thomas C. Wales park was completed in 2010 and opened to the public in October of that year. The park was dedicated in early 2011 in honor of late Assistant US Attorney and Queen Anne resident Thomas C. Wales who was tragically murdered, a case which still remains unsolved. The park’s previous life as a gravel quarry had altered the landscape, leaving a large hole in the side of the hill in the shape of an amphitheater, where an unintended wetland had formed at the center. It was later used as a materials depot and previous to being turned into a park the site was neglected, the steep slopes overrun by invasive plants.  Surrounding the site are several multi-family buildings.

Artist Adam Kuby and Landscape Architecture firm Site Workshop (collaborated to bring a new park to this site for neighborhood use, thanks in park to a 2010 Pro Parks Levy. The project was well underway when the original artist was let go and Kuby had to jump into the design “mid-stream and create something that would mesh with the existing plans”. View the site plan (PDF).

The small 1.3 acre park now provides habitat for wildlife, in particular, birds. “Thinking about how sites may be improved ecologically and how urban wildlife can be encouraged is something I do for almost every site-specific project I encounter. Art is another avenue with which we can welcome other species into our cities to increase our planet’s ecological carrying-capacity.  To me it’s a way to make art more meaningful and multi-faceted,” Kuby explains.

Kuby’s vision of the park as a haven for birds is echoed in the plantings and the sculpture rings. The history of the site is reflected with five stone filled, elevated rings overlooking the park and Kuby explains how this history influenced his design; “using rock as the main art material came directly out of the site’s past history as a gravel quarry. Usually one finds gabion rock baskets used for retaining walls  or streambank stabilization, but never high up. I wanted to use this mundane industrial material in an unexpected surprising way.” He goes on to discuss how he came up with the idea of the rings, “I wanted to create a strong visual statement while also improving the park’s wildlife habitat. The rings are floating in the tree canopy not just for visual effect but because that’s also where birds want to nest.”Each ‘Quarry Ring’ contains several non-toxic plastic containers made from HDPE and recycled polyboard, each with an entrance fitted for birds or bats.

In total there are 79 canisters for birds which either have holes for cavity nesters or are open for platform nesting birds. The bat canisters, 19 in total have small slots on the underside of the rings for entry. “I want to encourage cavity-nesting birds which are losing habitat in urban areas, so the nests with holes are specifically for them. And I used holes of a certain size to discourage starlings which are an invasive species that out-competes native birds,” Kuby explains. The houses are all maintained yearly.

The uphill side of each path is lined with stone-filled gabions (steel cages) which act as retaining walls and incorporate benches as well. These gabions weren’t specifically designed as habitat according to Kuby, but they may well provide it none-the-less by allowing animals to burrow under them or reptiles, small mammals and a variety of insects to hide inside. The unexpected wetland pond that the quarry gave rise to is now the centerpiece of the park with the design radiating away from the middle. Kuby states, “the wetland at the center of the park is an important attractor of urban  bird life, as is the dense vegetation surrounding it that provides excellent cover for birds.” Kuby particularly likes “… the intimacy of the outdoor circular space, and how the rings and walls amplify that circularity. That’s very unique.”

The plantings were chosen to be particularly attractive to birds and consist of Pacific Northwest natives which provide berries for food. They also provide year-round benefits to not only wildlife, but the human visitors as well with changing colors and seasonal interest. As the plants continue to grow and surround the rings, the houses for birds and bats will continue to become more desirable for wildlife. Kuby explains the draw of this space is that “the park is planted with all native species that provide both food and cover for many species. So this park has everything––food water and shelter!”

As this park is only a couple of years old it hasn’t had the time to really mature and fill out yet. However, comparing to photos from early on shows how much it has grown already. It’s also too early to know if birds and bats or other wildlife will move in and take advantage of this new space provided for them. “It’s really an experiment––the habitat part. There may be factors I couldn’t foresee, even though I showed the design to bird experts at Audubon and elsewhere. For that reason it has to work well as just a stand alone work of art, in addition to its habitat component, which I think it does,” Kuby explains.

This successful landscape has won the Merit Award for Public Works (PDF) from the Washington ASLA.

A special thank you to Adam Kuby for being willing to answer a few questions about his inspiration and design goals for The Metropolitan Field Guide.

View more photos of the park. 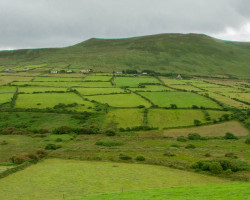 Hedgerows From Romans to Habitat

This is a revised and updated post which was originally published on June 2, 2010. History Although not as significant in the US as in the UK, hedgerows nonetheless offer a valuable design opportunity for wildlife habitat. In the simplest terms, a 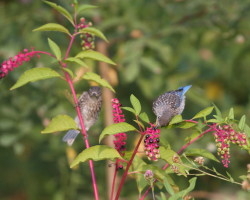 On Being Misunderstood:: Weeds

On Being Misunderstood is a feature at The Metropolitan Field Guide which will look at the variety of flora and fauna we live with which are too commonly misunderstood. From plants to wildlife, many of our daily interactions with these species