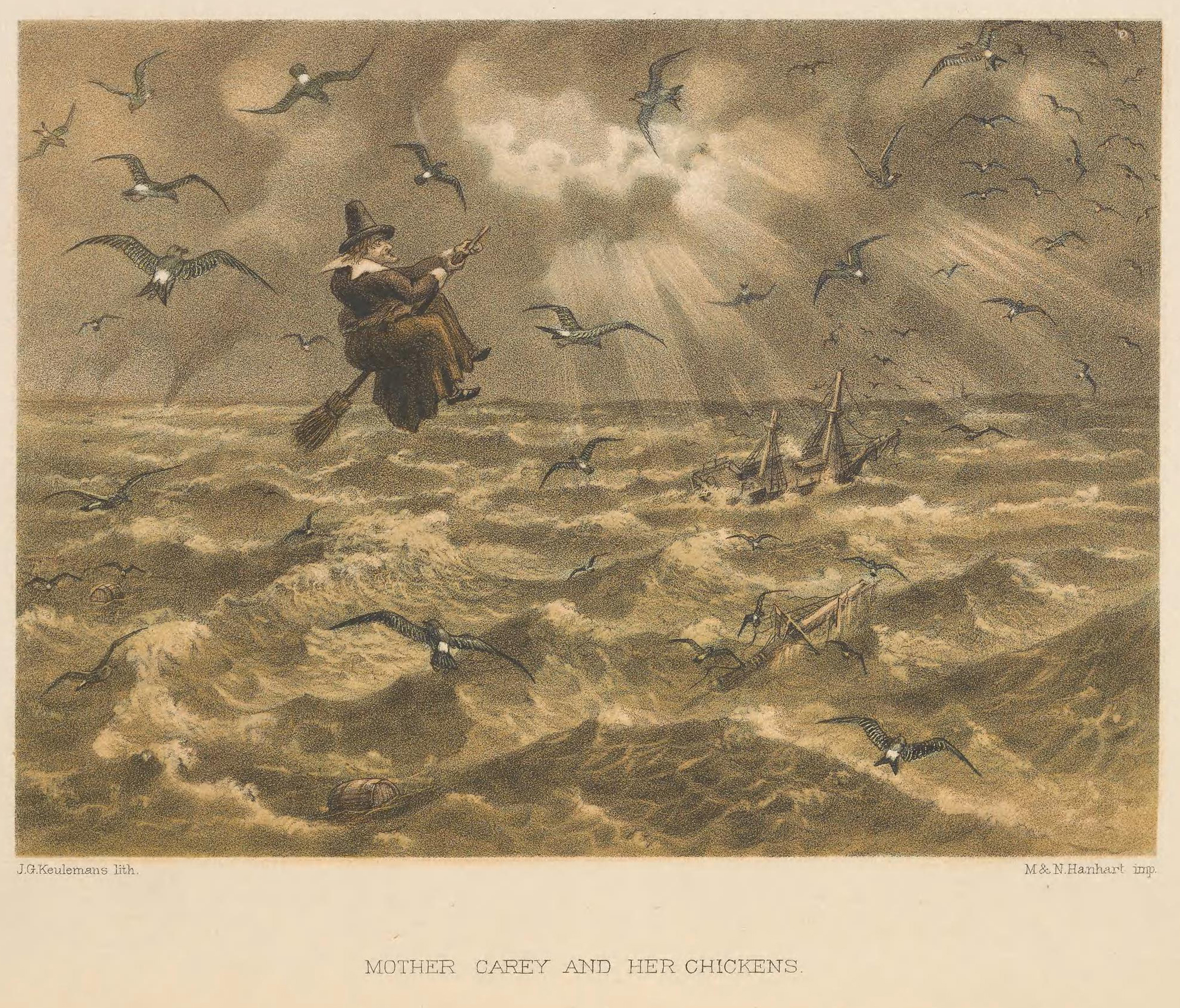 By Kelly BrennerDecember 5, 2019No Comments

Well, ah fare you well; we can stay no more with you, my love—
Down, set down your liquor and your girl from off your knee;
For the wind has come to say:
“You must take me while you may,
If you’d go to Mother Carey,
(Walk her down to Mother Carey!)
Oh, we’re bound to Mother Carey where she feeds her chicks at sea!”

It’s not clear where Mother Carey got her name from, but what is very clear is that sailors did not want to encounter this mythical sea deity. Mother Carey was the very personification of storms and the dangerous sea and sailors feared her. She was known to bring storms and cause shipwrecks sending the sailors to her husband, Davy Jones. Since at least the 1700’s many sailors have retired to Davy Jones’ locker, a metaphor for the bottom of the sea where the drowned rest. A great many ships and sailors have been sent to Davy Jones’ locker. Mother Carey and Davy Jones were believed to dwell in the deep sea and call the unfortunate sailors to their deaths.

Some believe that ‘Mother Carey’ comes from the term southern European sailors uttered when facing a deadly storm, Mater cara “Precious Mother,” but there is no record of this or when the term originated. Despite that, Mother Carey has been personified in many poems and stories over the years. John Masefield wrote about her in his poem Mother Carey (As told Me by the Bo’sun) calling her a witch and placing the blame of drowned sailors at her feet.

Mother Carey? She’s the mother o’ the witches
‘N’ all them sort o’ rips;
She’s a fine gell to look at, but the hitch is,
She’s a sight too fond of ships;
She lives upon an iceberg to the norred,
‘N’ her man he’s Davy Jones,
‘N’ she combs the weeds upon her forred
With pore drowned sailors’ bones.

She’s the mother o’ the wrecks, ‘n’ the mother
Of all big winds as blows;
She’s up to some deviltry or other
When it storms, or sleets, or snows;
The noise of the wind’s her screamin’,
‘I’m arter a plump, young, fine,
Brass-buttoned, beefy-ribbed young seam’n
So as me ‘n’ my mate kin dine.’

The British poet Cicely Fox Smith likewise wrote a poem about Mother Carey while living in Victoria, Canada. But her poem takes a different approach, painting Mother Carey more as a siren, calling the sailors to the sea.

As late I went a-walking by the sea,
I thought I heard men talking, I heard them call to me:
“Oh, sorrow take the city streets and the weary city stones,
It’s time for you to leave them while the strength is in your bones.”

Ah, shake and wake her, Johnnie, there’s the ship for you,
Lying in the Royal Roads waiting for her crew,
And every brace and backstay is singing soft and low,
“Mother Carey wants you and you’re all bound to go!”

Charles Kingsley portrayed Mother Carey in an entirely different way in his classic book The Water Babies. The child protagonist Tom searches for Mother Carey and her peace pool where, according to the animals, “she sits making old beasts into new all the year round”. Eventually he finds her in the far north, at first mistaking her for an iceberg. “And, when he came near it, it took the form of the grandest old lady he had ever seen—a white marble lady, sitting on a white marble throne. And from the foot of the throne there swum away, out and out into the sea, millions of new-born creatures, of more shapes and colours than man ever dreamed.  And they were Mother Carey’s children, whom she makes out of the sea-water all day long.”

But Mother Carey has long been bound with one particular kind of animal, one that carries her name, Mother Carey’s Chickens, more commonly known today as the Storm Petrel. But Mother Carey’s Chickens were a common term over the last couple hundred of years, being noted by Captain Cook and later by Charles Darwin. While sailing on the Beagle, Darwin made a note in his journal about the joys of sailing, “There is little to interrupt one, for instance since leaving Bahia the only living things that we have seen were a few sharks & Mother Carys chickens.”

The aptly named Storm Petrel is known to presage storms and sailors considered them a warning or a bad omen and that they were ushered in by Mother Carey. Some sailors believed that the severity of the coming storm could be determined by the number of petrels they saw. Others believed that Mother Carey’s Chickens lived in hurricanes and actively directed the storm. Yet other sailors regarded them as friends because they warned the sailors of the coming danger.

Although many sailors disliked the birds and the omens they brought, they dared not kill one because Mother Carey’s Chickens were thought to contain the souls or spirits of dead sailors. Perhaps the very sailors Mother Carey drowned with her storms?

Storm Petrels are pelagic birds in the order Procellariiformes, known as ‘tubenosed’ birds which also includes albatrosses and shearwaters. There are several species of Storm Petrels found around the world and many were known to sailors. Mother Carey’s Chickens were also more favorably known as ‘sea swallows’ and the collective noun for them is a wisp of petrels. These pelagic birds are generally small, the European Storm Petrel is no larger than a European Starling, and they hover over the surface of the water, dancing, or walking on the surface. This dancing is how they feed, by picking fish, crustaceans and jellyfish off the surface. They will dive under the surface, but only barely. While they are foraging, they can wander as many as 120 miles over just a couple of days.

Petrels, like other tubenosed birds, have a peculiar set of tubes running along the top of their beaks. Although seawater is not drinkable to humans, petrels can drink the salty water. The tubes filter the saltwater and the excess salt is discharged back out through the tubes.

Like many sea birds, petrels nest in burrows on islands and other land in colonies and when they land, they cannot walk on land, instead shuffling along. But they can defend themselves. When threatened, the adults and chicks can projectile vomit an oily orange fishy substance that is described as ‘foul’.

The European Storm Petrel is entirely pelagic when not breeding, and they are migratory, spending the breeding season in the northern hemisphere before flying south and spending the winter off the African coast and taking Mother Carey with them.