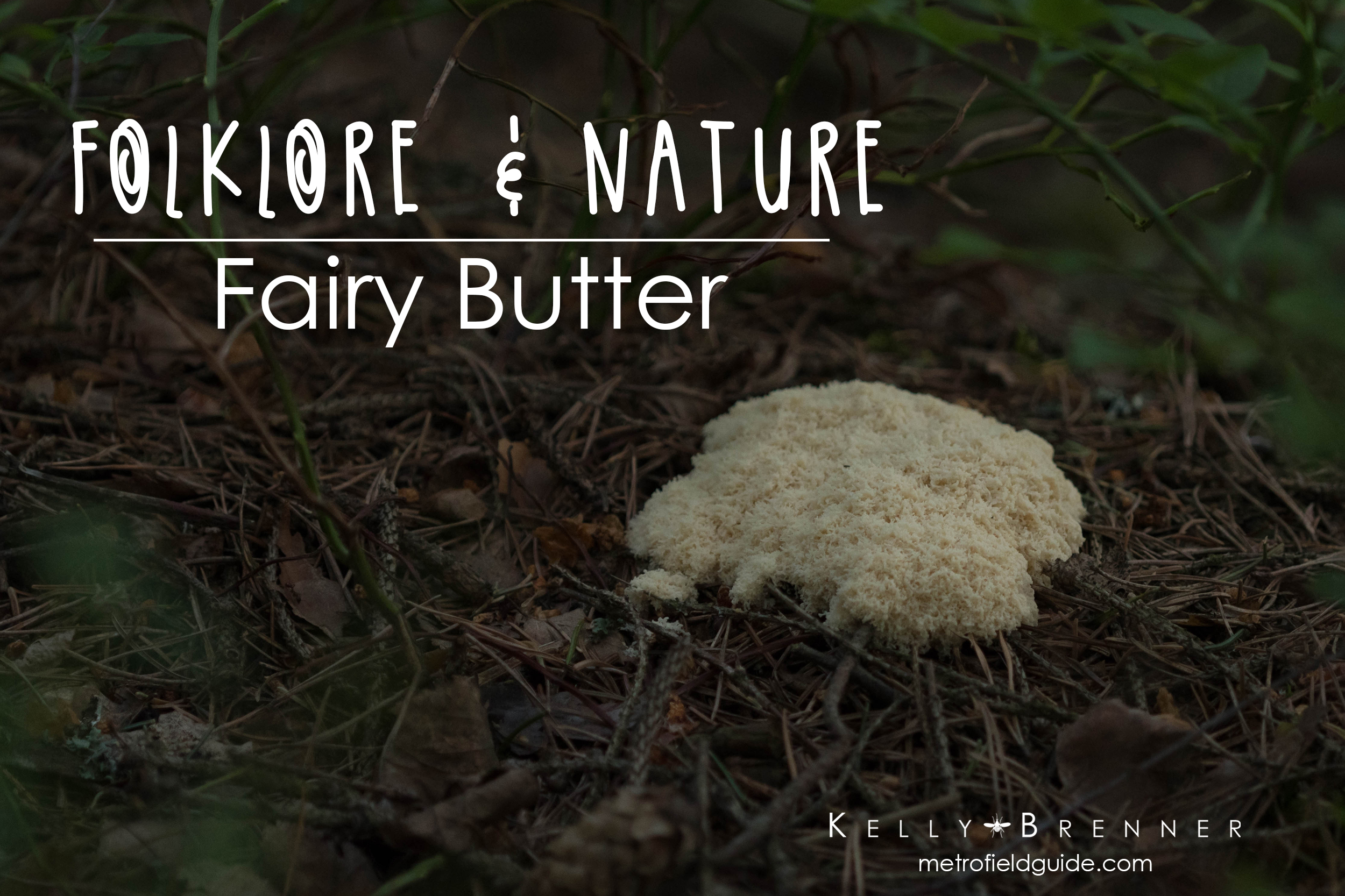 In Little Langdale the Busk and the Forge, the latter place only separated from our parish by the Brathay, were regularly visited by fairies — harmless little beings it would seem, of the house-goblin class, for their principal occupation seems to have been churning butter after the family had retired for the night. They were, however, rather thriftless little folk, for near the Forge it was common to find bits of butter scattered in the woods, dropped, it would seem, by the uncanny churners in their morning flight.

Hawkshead: the northernmost parish of Lancashire by Henry Swainson Cowper

There are many reports of fairy butter from around the UK and Ireland in folklore. In Scandinavia the same phenomenon was known as ‘troll’s butter’ while in Wales it was called ‘Menyn Tylna Teg’ and was supposedly found in mines. Common wisdom has marked down fairy butter as the yellowish orange jelly fungus Tremella mesenterica, also often known as witch’s butter. Tremella mesenterica is a common fungus found on deadwood where the bark is still attached. It sprouts out in a gelatinous leafy cluster, sometimes with a brainy appearance. The texture is jelly-like, soft, but firm. It doesn’t actually grow on the wood itself, but on another fungus on the wood, because it’s a fungal parasite.

There are a lot of common themes in reports of fairy butter in folklore: it’s found at the roots of old trees, it shows up after a heavy rain, and it has the texture and color of butter. But does Tremella mesenterica really fit with all of these observations?

Or is it possible that fairy butter is not a fungus at all, but a slime mold? Many of my readings about fairy butter have led me to think it’s the latter, or at the very least, a combination of observations of slime mold and jelly fungus.

In the story above from Hawkshead, the fairy butter is described as being ‘scattered in the woods’, and this description portrays the slime mold Fuligo septica very well. Unlike most slime molds, Fuligo septica is easily noticed and grows scattered on nearly any type of decaying matter, from grass to leaves to deadwood. In other reports, fairy butter was found in fields, woodlands and even on buildings like houses and barns. Fairies were reported to fling it at fence posts, doors, and other human structures. Grass, woodlands and wood structures are all places Fuligo septica grows, but jelly fungus would not be found in fields nor on buildings since it only grows on wood that retains bark. The jelly fungus decidedly does not grow on grass as is described below. But Fuligo septica does.

Nanzy has frequently met with fairy processions, when she chanced to be late or early out of doors; and has more than once received presents from her aerial neighbours; among other things, very nice rolls of fairy butter have occasionally been laid down before her on the grass, when she had the occasion to go to market. But she was too good a christian, and too well aware of the insidious nature of such gifts, to use this in ‘only meltith,’ though she applied it without hesitation to other household purposes.

Waverley Anecdotes: Illustrating Some of the Popular Characters, Scenes, and Incidents, in the Novels and Romances of Sir Walter Scott, Bart.

Another report discusses how fairy butter is found in peat bogs, which is another place the fungus wouldn’t grow, but the slime mold certainly would. An article from a pharmaceutical journal from 1850 debates the potential use of a ‘fatty matter’, which resembles ‘spermaceti’ (the substance in a whale’s head of a waxy texture) that grows on the peat bogs to make candles. This ‘fatty matter’ is fairy butter and the writer describes seeing it. “I have seen a collection of it–a little well, I may say–of six to seven inches in diameter, containing the matter pure and about the colour of butter. The superstitious tradition of the peasantry is that the fairies hide it for their use, and hence it is called ‘fairy butter.'”

Fuligo septica has the consistency of grated cheese and grows whitish to yellow. The modern common name for Fuligo septica is ‘dog’s vomit slime mold’, which gives a further indication of its texture. Tremella mesenterica, on the other hand, is more jelly like and has a smooth texture. It also is mostly bright orange in color.

There are several reports of fairy butter being consumed by animal and human. The fungus Tremella mesenterica is edible, but has no taste and few people willingly eat it. However, Fuligo septica has a history of being consumed by humans, particularly in Mexico, where it’s eaten like scrambled eggs. When the slime mold is fresh, it has a creamy texture inside of it.

“There used to be fairies at the spot, before the wood was cut
down . . .” .
Where was the wood ?
“It was on the top of the Bank,”—where now no trace of it
remains.
“Well; they went away when it was cut down ; but once they set
some Fairy Butter ready for a ploughman, when he was going to
have his dinner. One of his horses ate it ; the other did not. The
one that did not eat it died. They used to be in the cottage yonder,
that is now a cow-shed. It’s lucky,” added the old man, if you eat
fairy butter.”

On some surviving Fairies by Mrs. Hodgson

There are even further reports of fairies spotted selling fairy butter at markets, further demonstrating the edibility of it.

Another common observation in the folklore records, is that the fairy butter springs up overnight after a rain. Jelly fungus can grow quickly, but not likely overnight. Fuligo septica however, does literally spring up overnight when conditions are right, notably when it’s wet.

One report of fairy butter, from an article by J. R. S. C. in the magazine Chatterbox, states that fairy butter is seen in fields and woods, often “near the roots of old trees, and among the furze.” Furze is another name for the shrub gorse. It goes on to say of the fairy butter, “It has a broad yellow top which has something of the appearance of butter. From the suddenness with which a fungus of this sort springs up on a moist night it was supposed the fairies had something to do with its speedy growth.”

Once again, the ‘broad yellow top’ and ‘suddenness’ with which it grows on a ‘moist night’, perfectly describe the growth of the slime mold Fuligo septica. One more example that illustrates the speed at which fairy butter can appear comes from Forty Years in a Moorland Parish: Reminiscences and Researches in Danby in Cleveland by John Christopher Atkinson where he asked a local woman whether she’d seen fairies before. She answered with, “Neea, but Ah’ve heared ’em offens” before going on to tell a story about fairy butter.

What my interlocutor had heard were the sounds indicative of the act of butter-making; sounds familiar enough to those acquainted with the old forms of making up the butter in a good-sized Dales dairy. These sounds, she said, she had very often heard when she lived servant at such and such a farm. Moreover, although she had never set eyes on the butter-makers themselves, she had frequently seen the produce of their labour, that is to say, the “fairy-butter” and she proceeded to give me the most precise details as to its appearance, and the place where she found it. There was a certain gate, on which she had good reason to be sure, on one occasion, there was none overnight; but she had heard the fairies at their work “as plain as plain, and in the morning the butter was clamed (smeared) all over the main part o’ t’ gate.”

Forty Years in a Moorland Parish: Reminiscences and Researches in Danby in Cleveland by John Christopher Atkinson

Fuligo septica can explain all of these examples from the texture and color, to the speed of growth, edibility and locations it was found growing, while the fungus Tremella mesenterica does not fit these as well, if at all. 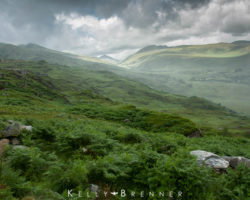 Poem of the Week: Wandering Clouds

By Edith Södergran Wandering clouds have fastened themselves to the mountain’s edge,for endless hours they stand in silence and wait:if a chivvying wind wants to strew them over the plainthey should rise with the sun over the snow of 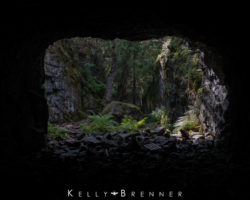 Poem of the Week: To All Four Winds

By Edith Södergran No bird strays here into my hidden corner,no black swallow that brings longing,no white gull that tides a storm…In the shadow of the rocks my wildness stays awake,ready to fly at the slightest whisper, at approaching