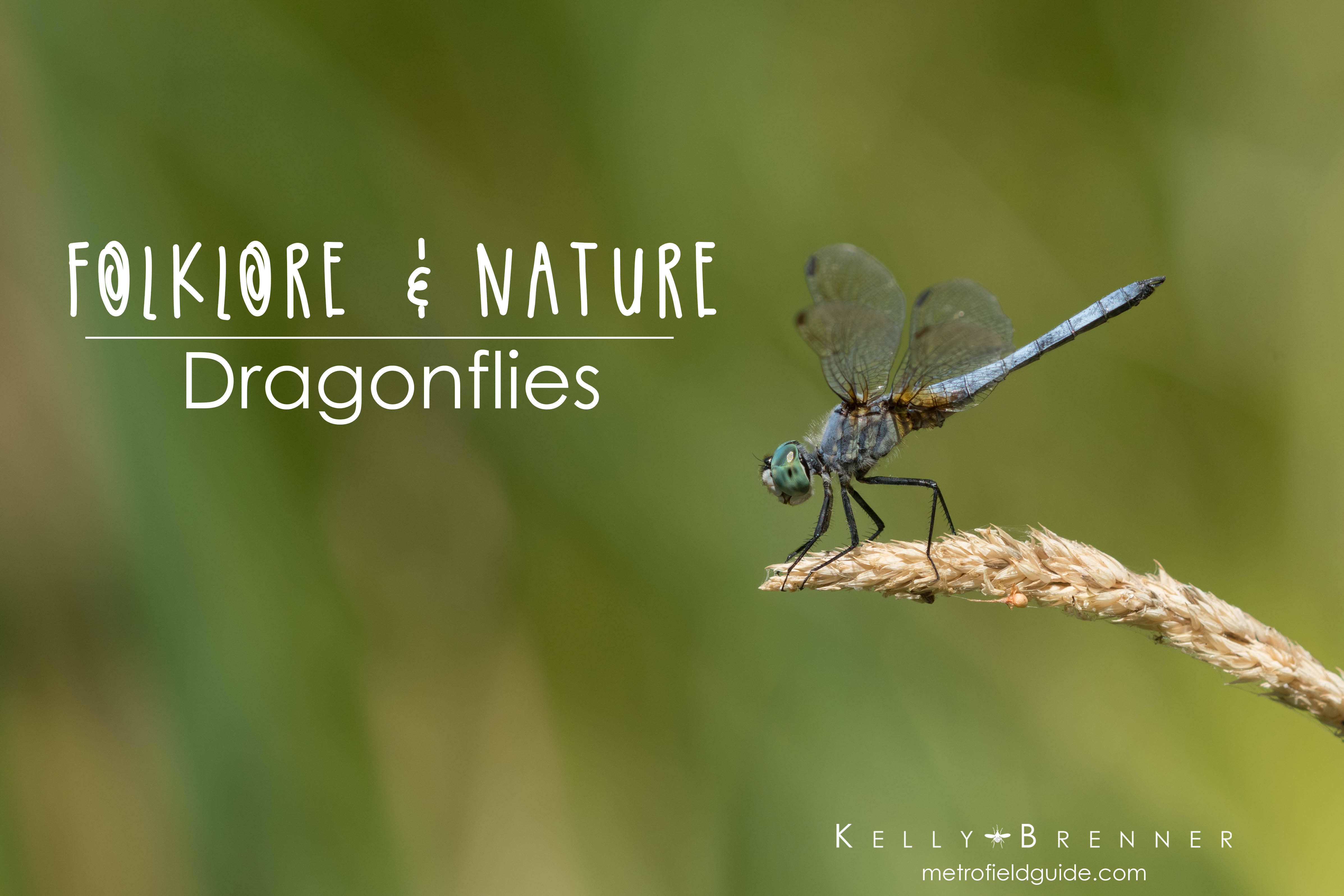 By Kelly BrennerSeptember 25, 2019No Comments

The ‘snake doctor’ name for dragonflies comes from Pennsylvania and the belief that they acted as guards of the serpents found there, warning them of any danger. Some believed that the dragonflies could even revive a dead snake, bringing it back to life. Killing the servants of the snake was inadvisable lest the serpent retaliate.

Dragonflies possess no stingers, the appendages on their tails are only for mating and they have no venom. The shape of the dragonfly’s body has led to another of their names, ‘devil’s darning needle’.

In several areas of the United States the dragonfly was thought to sew shut the mouths, eyes or even ears of misbehaving children or profane men. Others believed that dragonflies would sew fingers or toes together if they were exposed while sleeping. In parts of Europe, including Sweden, dragonflies could tell if children were lying, and would stitch their their eyes or mouths closed as punishment. Today, the Aeshnidae family of dragonflies is still called darners in North America.

In Scandinavia a dragonfly flying near you was thought to be weighing your soul for the devil and the devil is also connected to dragonflies in another way. One story from Romania recounts how after god let the devil run wild, he sent an army of angels, led by St. George to defeat the devil, but as they charged, the devil cast a spell on St. George’s horse, turning it into a dragonfly.

Another horse story comes from Germany and is about a princess who was too wild and led a selfish life racing around on her horse until one day she treated a little man poorly and rode away. But as she raced off on her horse, the man cursed after her “may you always be joined to your horse as one!” and they transformed into a dragonfly, called Hatzpferd.

Like butterflies, dragonflies have also been linked to regeneration, immortality and rebirth. In China the dragonfly symbolizes summer, but also instability. To the Zuni Native Americans, dragonflies possessed supernatural powers and feature in the legend ‘The Origin of the Dragonfly and of the Corn Priests’ where young siblings are rescued and blessed by the Maidens of the Corn. When the children become great leaders, the boy makes a corn-being on the advice of the Corn Priests calling it dragonfly, and so the dragonfly and corn were always connected. In Navajo legends, the first world was inhabited by Insect People, some of whom were dragonflies.

Dragonflies are very ingrained in Japanese culture. There is a story that Emperor Jimmu climbed to the top of a mountain and said that the country looked like two dragonflies mating, (or resting, or touching its tail depending on the story) and Japan is also sometimes called Akitsushima, meaning ‘Dragonfly Island’ or ‘land of dragonfly’. Hiroaki Sato wrote this poem about it:

Yamato has clusters of mountains
but closest to the city is heavenly Mount Kagu.
I climb; I stand and survey the land:
Smoke rises in the countryside,
Gulls rise over the lake.
A good land, this, the island of the dragonfly,
the land of Yamato.

By Kiroaki Sato, translated by Burton Watson in Country of Eight Islands: An Anthology of Japanese Poetry

The dragonfly, called tombo or yamma is a national emblem and represents victory in battle and the samurai frequently had dragonflies adorning their clothing, helmets and swords. Dragonflies are also considered lucky in Japan and there are stories about the insects leading people to good fortune. A popular activity for children in Japan is to catch dragonflies by tracing a pattern in the air with their hands to mesmerize the dragonfly.

In mid-August during the Buddhist festival of Bon, dragonflies often appear in large numbers and are thought to be carrying spirits when they arrive. People build bonfires in their gardens to guide the spirits home for a visit before building another fire to send the spirits on their way again.

Desolation ! — Dragonflies flitting above the graves !

A Japanese miscellany By Lafcadio Hearn