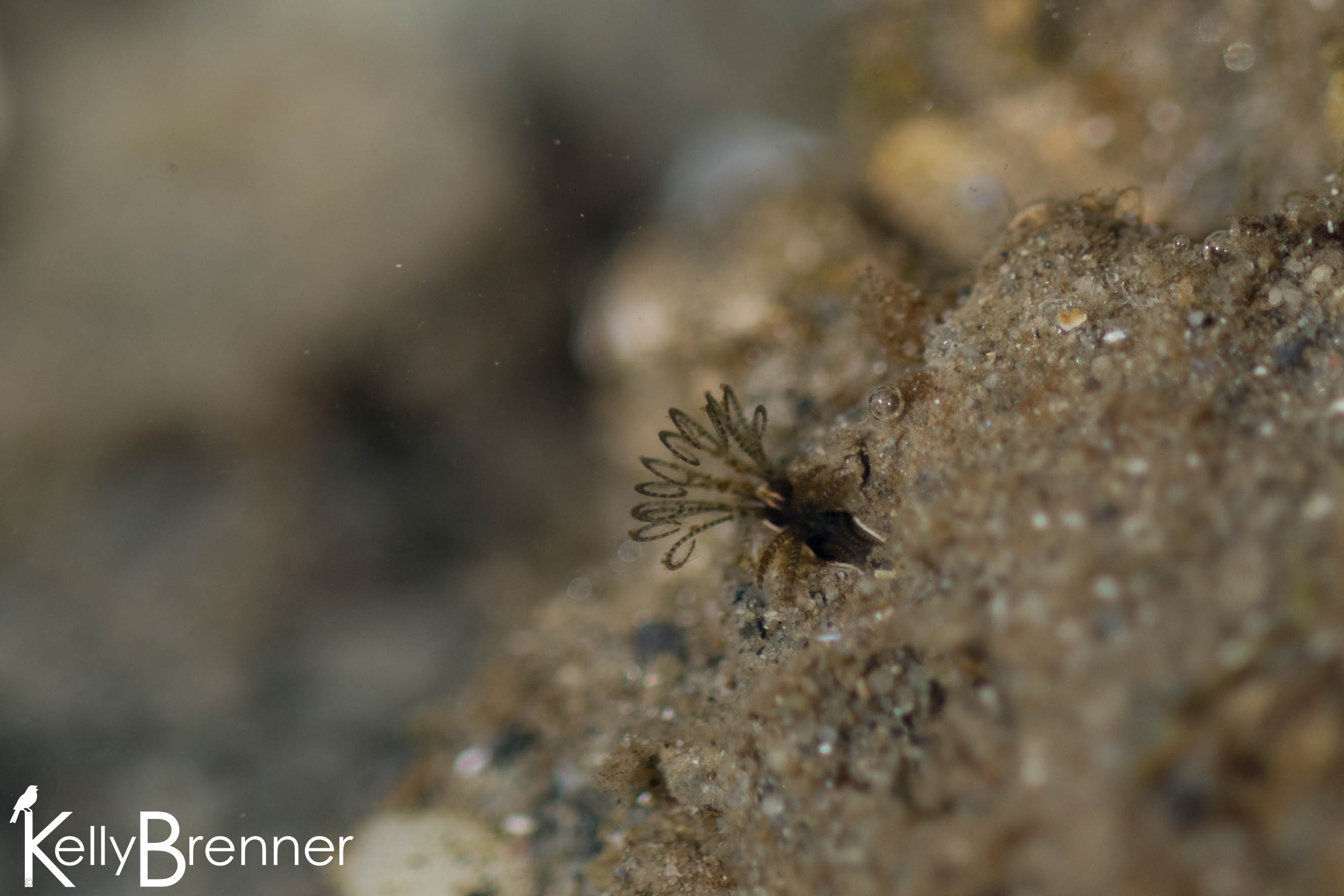 The second day of the Seattle City Nature Challenge promised to be sunny and to make the most of it I headed again to the beach hoping to add to the biodiversity for Seattle. This time I went to Saltwater State Park, just south of Seattle. I had been there a couple of times before and remembered it was a rocky beach with a freshwater stream emptying out into Puget Sound. Again I arrived an hour or so before low tide and started to make my way down the rocky shore to the water’s edge.

Along the way I stopped to take a closer look at the rocks and patches of standing water. I found barnacles still active, their cirri waving in and out of their shells. As I observed them, I saw cirri, their legs, curling in and out as they filtered small particles from the water. In some of the standing water I also found several small hermit crabs. I flipped over a few large clam shells and underneath found more barnacles as well as a half shell with three flatworms hiding. Stuck on various shells and rocks were a just couple of small mussels and a larger number of limpets.

Out in the water I saw a flock of black birds and with my camera discovered they were Surf Scoters. There were also gulls everywhere. Further out in the water I spotted – and heard – Common Loons as well as Horned Grebes, Pigeon Guillemots and Barrow’s and Common Goldeneyes. As I watched the water I noticed something sliding through the surface and then I saw a fin. I got a quick shot good enough to see it was a Harbor Porpoise, a good addition to the City Nature Challenge. Shortly after I observed a Harbor Seal watching the people on the shore.

I waded through the water to the freshwater stream and as I stood in the mouth I noticed a crab walking by my boots. I dipped my hand in and pulled out a kelp crab. It’s sharp legs reached around my hand and dug in to hold on. I returned it to the water and shortly after noticed another. As I walked to the other side of the creek I soon noticed dozens of kelp crabs of varying sizes walking, hiding or standing in the water. Soon it was hard not to notice them and I found it easy to pick out their spidery legs among the rocks and seaweed.

I also noticed another animal which was likely plentiful, but I didn’t actually see. I knew it was there beneath the sand, because I found many empty shells. I encountered a half dozen empty moon snail shells as well as more than a dozen empty clam shells bearing the drilled hole the moon snail made before sucking out the occupant.

After examining the water I returned to the shoreline and starting investigating rocks. I found more shaggy mouse nudibranchs, some with eggs like I found at Alki Beach. I also found many hermit crabs and was inspired to learn more about them after watching them. Among the rocks I found more of the usual denizens; thatched barnacles, limpets, snails, bryozoans, shore crabs and tube worms. As I lifted one rock I heard a splashing sound and discovered a sculpin fish attempting to flop away from the sunlight.