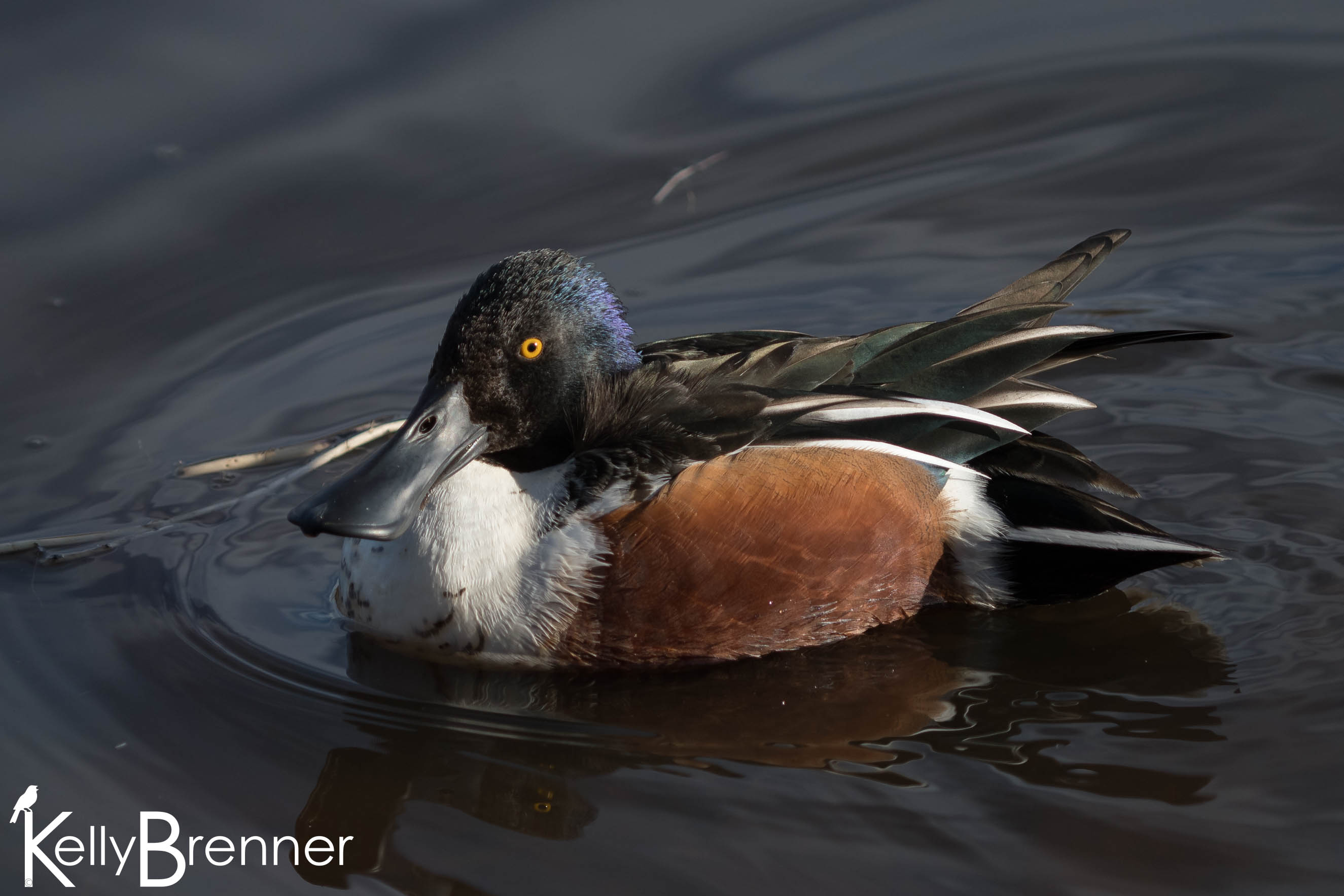 Over the last couple of weeks I hadn’t spent as much time at Washington Park Arboretum as I did during my 365 Nature Project, but yesterday promised a sunny day so I decided to walk around while my daughter was at her outdoor preschool. Although it was cold again, the freezing streak had broken and I walked to the pond near Foster Island to see if the ice was gone and the water was open to ducks again. Indeed it was clear again and I spotted a few birds foraging in the water, but mostly on the far west side of the pond. I followed the edge of the pond and around trees before approaching the western bank and as I got close I could see ducks were settled on the shore because of the circles of water radiating out. As I got closer a dozen Mallards swam away along with one Northern Shoveler. If there is one duck that is impossible to misidentify it’s the Northern Shoveler because of its long and spoon-shaped bill. They are quite common here in the Pacific Northwest but I realized as I watched this individual, I’ve never been so close to them before so I squatted down over the frozen grass to watch and photograph him.

After my initial approach the shoveler swam to the other side of the pond but after a few moments he returned to his preferred dozing location. I watched him get close and when he turned and the sun hit his feathers I realized how little I know these birds. His head was green and iridescent just like a Mallard, but I noticed the long feathers along his back were also iridescent along with a small patch on his rump. I also observed his spread out tail with feathers ending in a point instead of a smooth and round arc. His eye was one of the stand-out features because it was bright yellow, standing out dramatically against the dark green head. I studied his oddly shaped bill and noticed the large, rounded end which curved inwards and in that curve were hair-like bristles. I can’t recall having seen a duck bill with long bristles like that before. I was also struck as how the duck held his wing feathers in a messy, poking up manner and not tucked down smoothly like his Mallard companions.

I also had a fun time watching a male Mallard taking a bath and realized I’ve never closely watched this process before. The duck would flip, doing a somersault in the water briefly exposing his legs and belly to the air as the water sprayed up around him. Then he’d flap his wings making large splashes in the water before scratching his head with his foot. Then he preened contorting his body, first stretching his neck up tall to get at the lower neck feathers, then twisting and turning his neck to get at his back. It was a very acrobatic display.

Watching even the most common and overlooked birds always offers something new and I find there’s always something to learn.