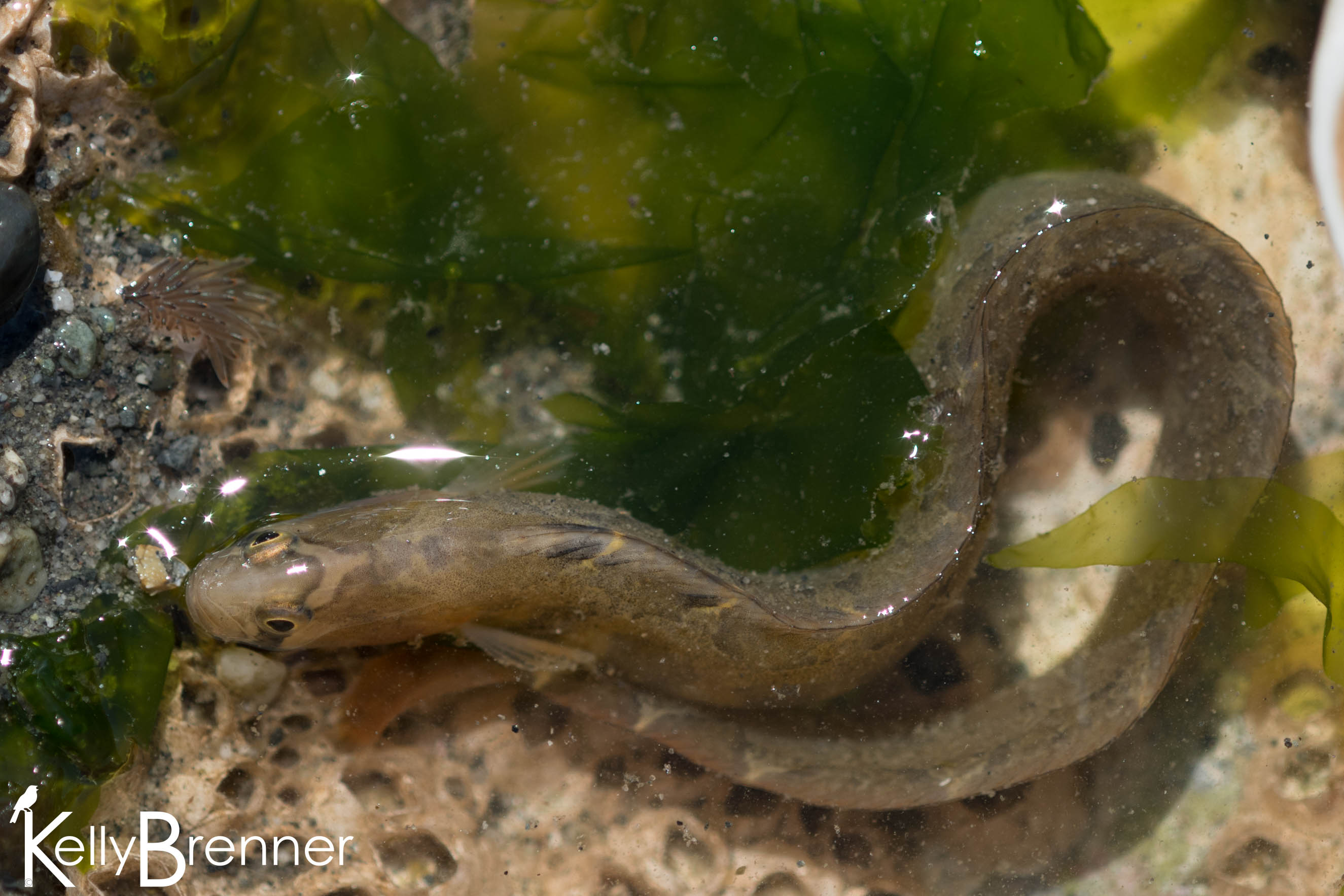 Over the last two weeks, transient – also known as Bigg’s – Orcas have been seen nearly every day in Puget Sound. For a week they were seen in the south part of Puget Sound, near Olympia and Tacoma but during the last week they were observed regularly around Edmonds and Mukilteo, just north of Seattle. Mid-week I went to Edmonds hoping to catch sight of the Orcas because they had been observed from the ferry between Clinton and Mukilteo in the morning. By the time I arrived there were no sightings of the Orcas, but I did meet somebody from the Orca Network and had a nice talk about the whales.

When Saturday arrived the weather ended up being decent despite the forecast of possible rain and we decided to head north back to Edmonds again. There’s a park near the ferry right along the shore line which is also an off-leash dog park called Marina Beach Park. A perfect combination for a family outing – I could search the shore for marine life while the dog ran around. We arrived a little before low tide and I immediately noticed the sand collars of Moon Snails. Before our gray whale tour we had stopped briefly at this park and I had seen many signs of Moon Snails; empty shells of the snails as well as empty clam shells with the tell-tale drilled holes from the Moon Snail, so I wasn’t surprised to find their sand collars.

These plunger-shaped are unique and formed by the female Moon Snails as they lay their eggs inside the sand. I first noticed them last year during my 365 Nature Project at Scenic Beach State Park and again at Alki Beach. At Marina Beach Park they were particularly abundant. In some places there was a grid of sand collars, none more than five feet apart and they were hard to miss. There were also several broken pieces of Moon Snail shells as well as many drilled clam shells. But not one live Moon Snail to be found.

Never the less, I found many other fascinating animals along the shoreline. I noticed a particularly large and empty clam shell which I pulled out of the water and observed something very small and brown sliding along over the Acorn Barnacles. I first thought it was a flatworm but quickly realized it wasn’t a worm at all, but a nudibranch. Unlike the Shaggy Mouse nudibranchs I’ve seen so frequently in Puget Sound, this one was tiny, no more than a quarter inch long. I scooped a little water into the shell to see the nudibranch in it’s more natural form and it transformed its appearance completely. Instead of a flat worm it inflated into an animal with long balloon-like shapes sprouting from its back. I could see it was similar to the Shaggy Mouse, but the back of the head and neck area had a florescent orange and blue pattern. And the cerata, the long balloons, were brown with orange stripes near the tips. Later I consulted my books and discovered it was an Opalescent Nudibranch.

As I admired the nudibranch my daughter pointed out something in the water. She said there’s a fish and kept pointing, but it took some time until I finally spotted it among the seaweed. I could see it was long and slender and I used the same shell containing the nudibranch to scoop up the fish. It was about six inches long and I could see two small fins on its side. The colors on the fish were varying shades of brown with a few hints of yellow on the long dorsal fin. I believe it may have been some type of gunnel. While I watched the nudibranch and gunnel I noticed yet another creature darting around in the shell and I looked closer before realizing it was a skeleton shrimp. I had seen my first skeleton shrimp – not a shrimp at all but an amphipod – at Alki Beach last year. That skeleton shrimp had simply clung to the seaweed and not moved much, this one was jetting around the shell until it finally settled briefly on the seaweed allowing me a look at it. It’s quite a bizarre creature, vaguely resembling a shrimp, but more close in appearance to a monster from Doctor Who.

I continued my investigation of the shore and found many chitons and a creature that looks like a limpet, but is soft and spongy. I have not yet figured out what this is despite encountering it several times before. With the sun shining into the water, one seaweed in particular was quite eye catching. It was purple or deep red in color, but as its flat surface rolled in the waves it showed an iridescent glow of blue, green and yellow. I looked it up in my book and is perhaps the most appropriately named  of seaweeds, Iridescent Seaweed.

One rock on the shore was covered in eggs, the same I’d first seen on Alki Beach earlier this year. As I looked I found many such rocks covered in the eggs of dog whelks. I examined them closely and found many brown from sediment and whatever else, but many were pink while others were almost clear. It was the clear eggs which were most interesting because I could see small, white dots inside. With the white dots I thought I could see other shapes pressed against the egg casing which I fancied to be the tiny, baby snails. Many of the eggs had the tip missing and I assumed that’s how the snails exit their egg.

The shore is full of creatures and a short period of sitting still always reveals a tremendous amount of life. In the small pools of water I saw many shrimp darting around and on flat patches of seemingly bare sand, the movement of many tiny creatures revealed it to be full of barnacles. They worked in the thin layer of water, their combined efforts giving the appearance of some type of steampunk machine, constantly moving. I also noticed the open gape of bivalves looking exactly like the sarlacc from Return of the Jedi. Elsewhere a hermit crab sat, Green False-Jingles grew on a shell and an isopod hid under a rock.

Twice I found a white tube spinning about from a hole looking like an albino elephant trunk sticking up through the sand. Both had bits of shell stuck to the tip, which I initially first thought they were trying to dislodge. But upon watching them, it seemed like they were trying to keep the shell attached for some mysterious reason, or using it as a tool. I flipped some rocks and discovered Shaggy Mouse eggs and then finally a Shaggy Mouse nudibranch. Near the end of my low tide explorations I found another Opalescent Nudibranch and this one I scooped onto a shell to watch. It glided along the shell, it’s tentacles and cerata gently floating in the water. The florescent markings on its back distracted from the light colored skin which I thought I could see through slightly. Nudibranchs are quickly becoming one of my favorite marine animals to find and watch.

Although I regularly paused in my small scale searches to check the water, no Orcas were in the area. Reports later revealed they were in the Saratoga Pass, further north of Edmonds.