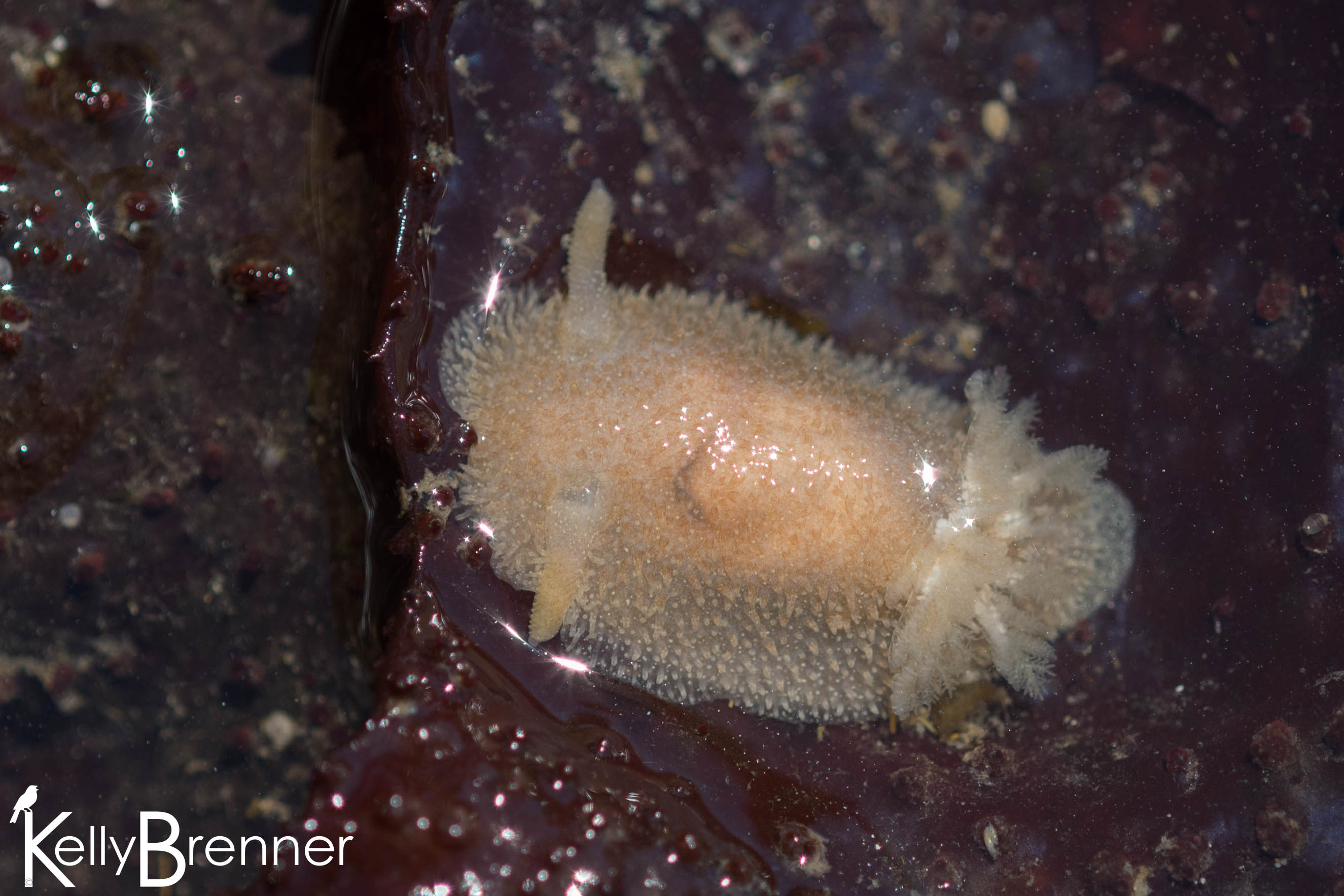 Last weekend we had the first of our really low tides of the year and I took advantage of it by heading to Alki Beach two days in a row. On both days I was eager to explore and although the low tide didn’t reach the lowest until just after noon, I arrived before 11 am both days. Even though it wasn’t yet at the lowest point, a great amount of beach was exposed, much more than I’d seen all winter long. Both days I wandered up and down the beach. Alki Beach has a diverse habitat with some areas of sand with eelgrass beds, a few areas of large boulders and a lot of rock. I left the large boulder areas until the lowest of the tide because they were farther out in the water. Likewise, I left the sand and eelgrass for later.

The first areas I wandered were the rocky shores. There are long strips of solid stone on the beach which collects water in its crevices. These pools are full of interesting animals like feather-duster worms, hermit crabs, chitons, limpets, amphipods and sea anemones. This time I found a new animal I hadn’t noticed before. At first glance it looked like a tiny, gray flounder, but when it stopped I could see it looked more like a flattened roly poly. It was certainly a crustacean and had segments like a roly poly but it also had a flat, wide tail. There were several of them in the various pools, some gray, some white and some a mixture of colors, but all wonderfully camouflaged.

In another pool I found a pair of shells, one banging against the other. Within a minute the banging one pulled away and as it crawled off, a small hermit crab emerged. I don’t know if they were fighting or mating, but the second hermit crab was way too small for the shell it was in. Later while checking under rocks, a bright orange animal easily grabbed my attention. It was long and worm-like with a mass of thin threads on one end. As I watched the threads moved, rather like a sea anemone. Halfway along its body it had tiny flippers which almost looked like feet. I grabbed one of the beach naturalists and discovered it was the most appropriately named, Spaghetti Worm.

As the tide retreated I visited a long row of large rocks which lay perpendicular to the shore, one of the most popular places to visit at low tide. The Seattle Aquarium sends out beach naturalists during these very low tides to help people identify the creatures and to point out particularly interesting finds. I kept my eyes and ears open and saw a particularly large California Sea Cucumber, a Gumboot Chiton and a large ribbon of yellow nudibranch eggs.  I dug around in the seaweeds and flipped over rocks and found several nudibranch species. Several were tiny and they reminded me of the tiny garden slugs I find when I’m pulling up weeds. They were no more than a quarter inch long, at the most. Some of the other nudibranchs were larger and one of the beach naturalists showed me a pair of small dorids. I also found many, tiny Opalescent Nudibranchs and one Sea Lemon. There were also sea stars, including a Sunflower Star. I saw plenty of different chitons and a small grouping of what I think were Blue Topsnails.

I waded through the pools of eelgrass and found many fish hiding in them. There was one long and thin fish, dozens of the tiniest sculpins and a few tiny, flat fish which were a mottled gray color. As I walked along the eelgrass beds I found many tiny things moving in the ripples of sand which still contained water. I looked closely, very closely and discovered they were all skeleton shrimp. Over the two days I found many skeleton shrimp of a wide range of sizes and was able to watch them moving. They are peculiar creatures.

Up in the sky I observed one juvenile Bald Eagle, an Osprey and a few Great Blue Herons. I also watched the gulls successfully catching a variety of seafood and one tug of war between two gulls over an unfortunate fish.

Perhaps the most exciting find was the moon snail I found as the tide was going out, cruising (more or less) along the top of the sand. I watched it as it dug itself down with the outgoing tide.

I’m very much looking forward to the next round of low tides.