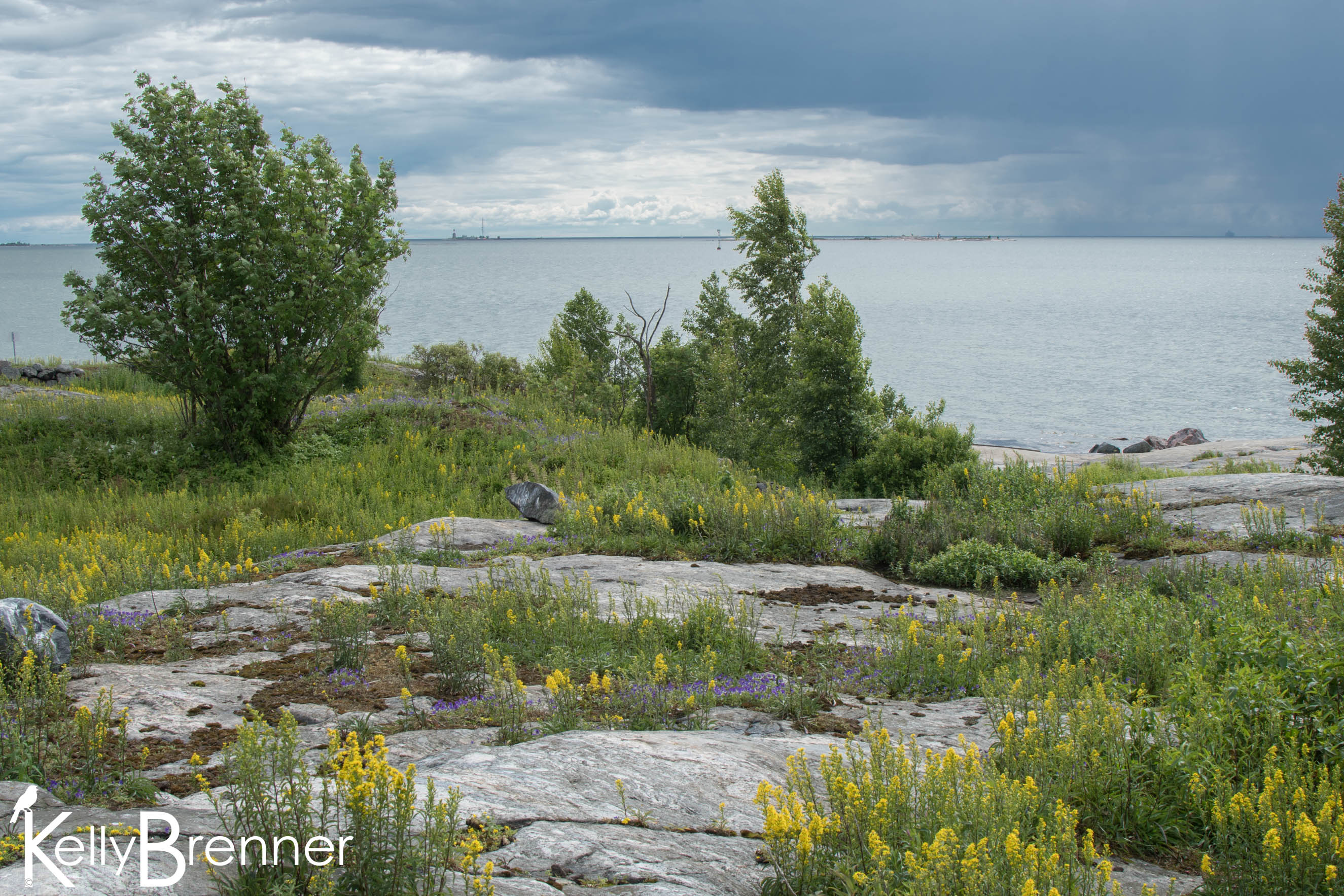 Harakka Island is a stone’s throw from the shore in Helsinki and as we waited for the boat to arrive to shuttle us there, I watched large groups of Barnacle Geese wandering around the park and swimming in the water. Some had goslings, but they stayed apart from a large group of geese without young. Walking down to the dock, a Common Tern sat on the hand rail, occasionally leaving to dive after fish in the water below. Along the shore oystercatchers stood with, but apart from the geese and out in the water Common Mergansers swam.

Our first stop after arriving on the island was to visit the nature center located in a small building a short walk up the hill. Inside they had microscopes set up to see the aquatic life found in the water and other curiosities found on and around the island. The workers told us we could ignore the ropes set up to protect the nesting birds because they had all fledged and left the island already. We were free to explore the entire island at our leisure.

Much of the small island was rocky and between mass of rock, sedums sprouted up creating bright yellow patches with their flowers. Oystercatchers wandered along the water’s edge and Barnacle Geese hid in the low-growing plants or laid perfectly photogenically among the flowers. I stepped over the rope barrier, feeling a wrongness despite the assurances it was permitted, and quickly found signs of nesting. A few broken egg shells were nestled in cracks in the rock and feathers lay snagged in plants. More than a couple of bird carcasses remained on the ground, most completely unrecognizable, one still wearing a metal band on its leg. The barren rocks were the perfect place to look for lichens, and brown, yellow, white and black shapes coated the rocks.

I walked up the small hill and saw a group of adult and immature cormorants resting on a small patch of rock protruding into the water while out in the water, a group of juvenile and female Common Eiders swam. Barn Swallows swooped over our heads and I looked up to see a large swarm of tiny flying insects over my head.

We found a path leading into trees and followed along before coming to a boardwalk crossing a small pond. We stopped to look and noticed tadpoles in the water. The closer we looked, the more we saw, hundreds of tadpoles, some already with tiny limbs, squirmed around in the shallow water.

The path led us back out onto the rocky expanse where I found many different types of flowers wherever they could gain a foothold in the rock. Bumble bees frantically flew from one flower to another. In the small trees, a pair of Fieldfares rested. All over the island, magpies perched and flew and squawked. Harakka is the Finnish name for Magpie.

The views from the island out over the Gulf of Finland with low-lying clouds on the horizon were perfectly iconic. We encountered no other people while exploring the island aside from those at the nature center and it was very peaceful with only the wind talking to us.