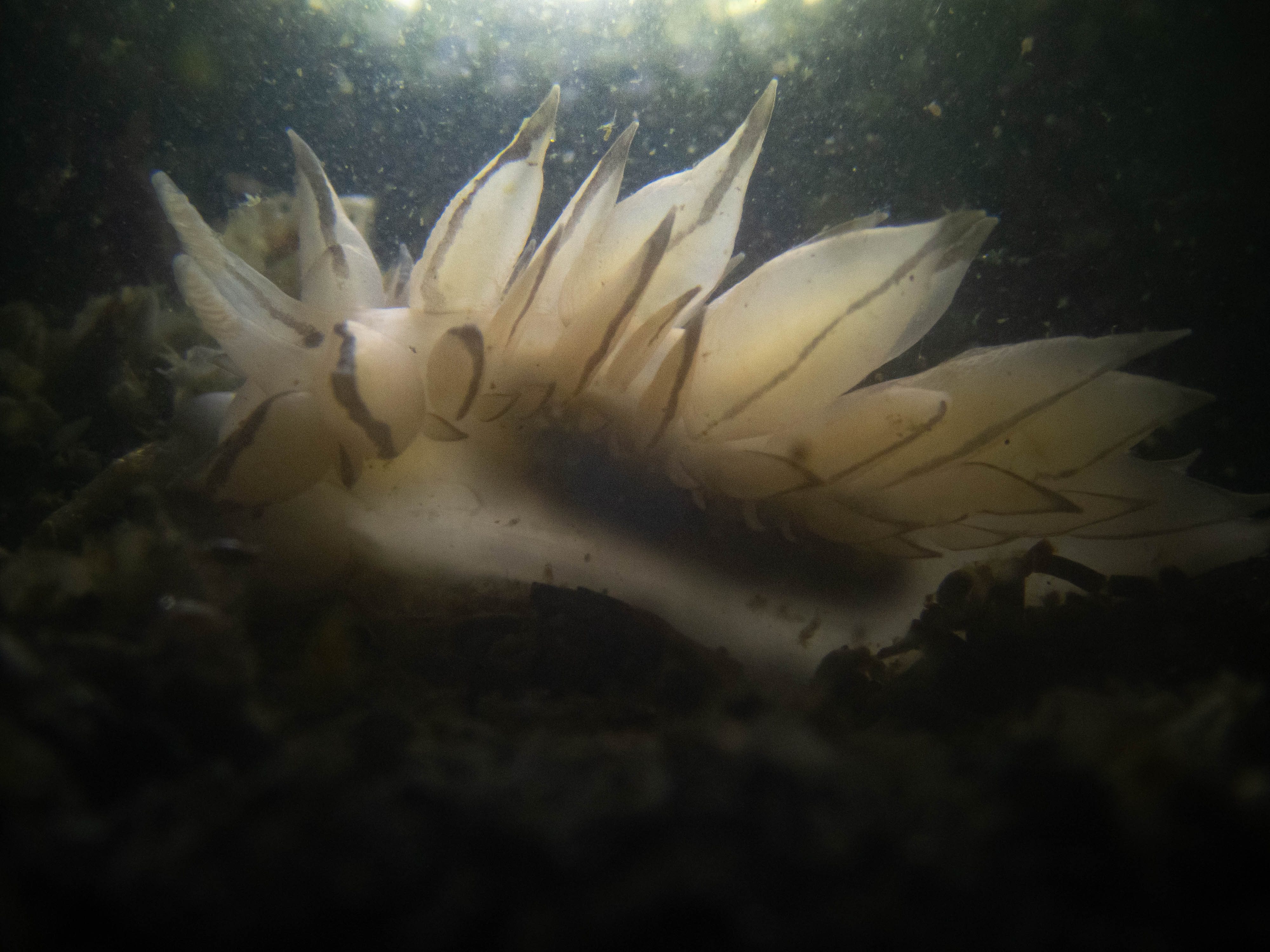 Under a ferry dock might not seem like the first choice when it comes to searching for nudibranchs, but urban habitats can be surprising. To be fair, it’s not the easiest place to find nudibranchs at low tide. The ferry constantly comes and goes creating large waves (large for Puget Sound anyway), which makes the sea life under the water dramatically sway back and forth in the current. But not all of the creatures there can hang on and many get washed off their tenuous hold to whatever small bit of seaweed or rock they can find in the largely sandy intertidal zone. While the ferry motors kick up waves, the waves churn up the sandy bottom creating permanently silty water which reduces visibility and makes it challenging to photograph anything.

Regardless of the challenges, I continue to visit this particular ferry dock because I learned it’s a reliable place to see certain nudibranchs like Tritonia festiva and Armina californica, both of which have a particular prey found there, the sea pen. This past week had the lowest tides of the year in Seattle, and I visited the ferry dock twice. Surprisingly, I didn’t find either of those two nudibranch species, but there were many other species I was excited to see. One I hadn’t seen in Seattle before, one was brand new to me, and two others I had only found once before.

What I didn’t expect this visit, were the dozens upon dozens of brand new sea pens. I always see a few large sea pens there. These are truly large, some may be nearly up to my knee. But this time, there were baby sea pens no more than four or five inches tall, and they were everywhere. It was exciting to see so many. Other fun and interesting finds were a large moon snail fully expanded out of its shell, and a small young moon snail washed up on the beach. I also saw several ochre stars and leather stars, a one sea star I hadn’t seen before, a striped sea star (Solaster stimpsoni). Perhaps my favorite non-nudibranch finds were two sea anemones I’ve looked for, but never found before. One is the small Ten-tentacled Anemone (Halcampa decemtentaculata) which, unlike most anemones, burrows into the substrate instead of anchoring onto a rock or other solid item. I was very excited to see a Jelly Dwelling Anemone (Peachia quinquecapitata) which is very similar in appearance, but has twelve tentacles instead of ten, and a fascinating life cycle. As larvae, these anemones are pelagic and parasitic, living inside jellies and feeding on their gonads. If they run out of food, they transfer to another jelly until they’re done feeding and simply fall to the sea floor to become an adult.

Now, on to the nudibranchs! 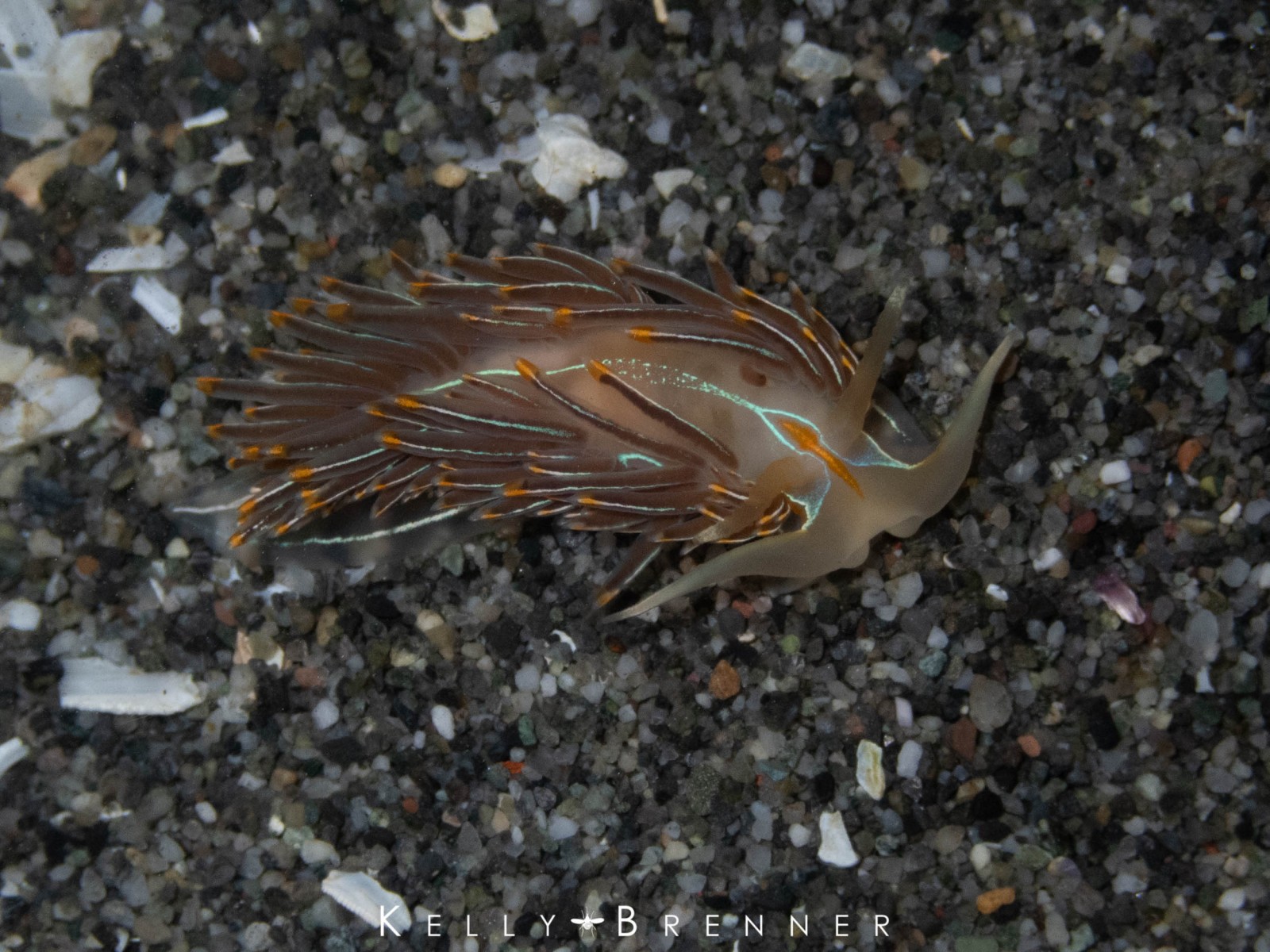 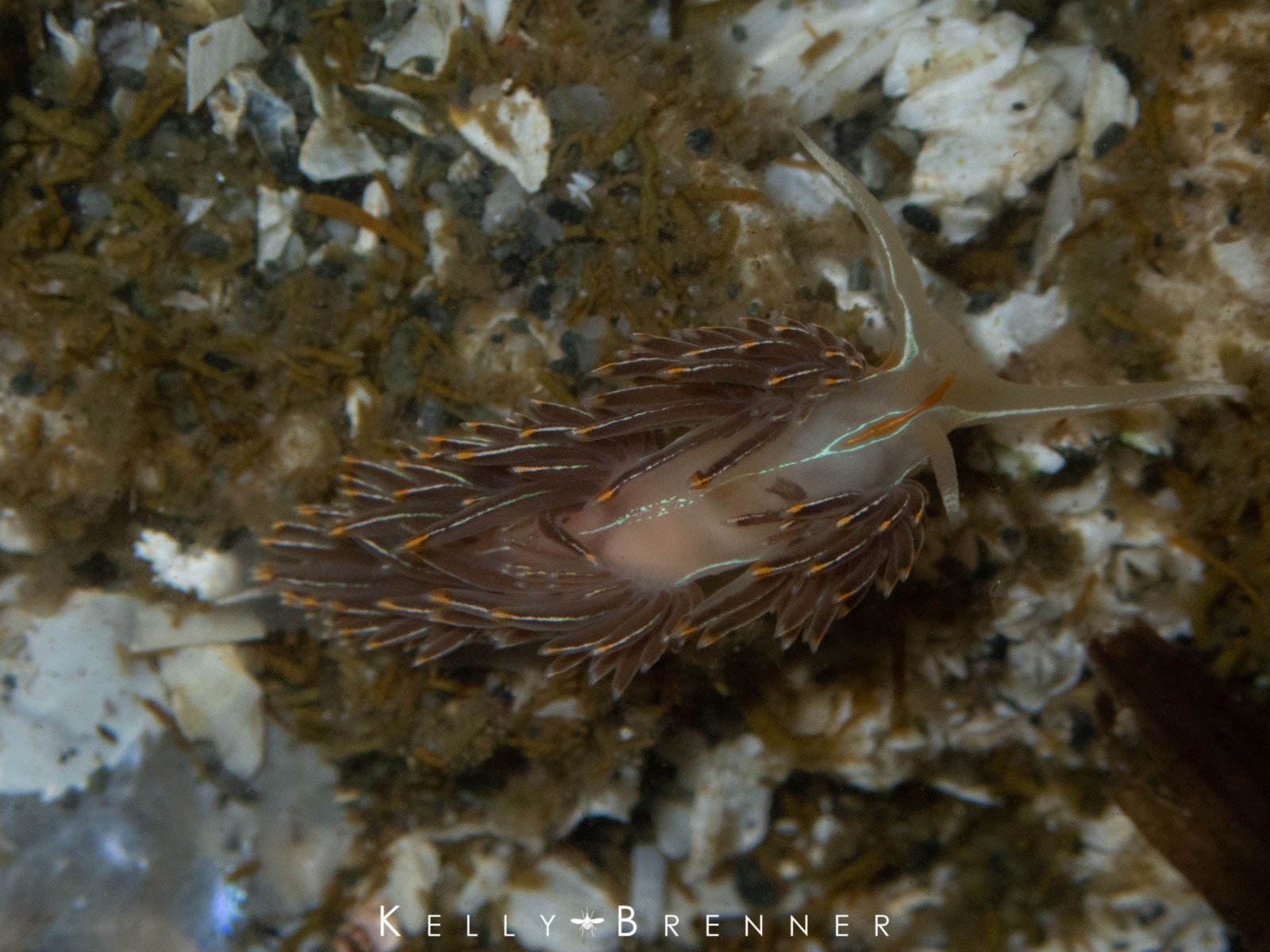 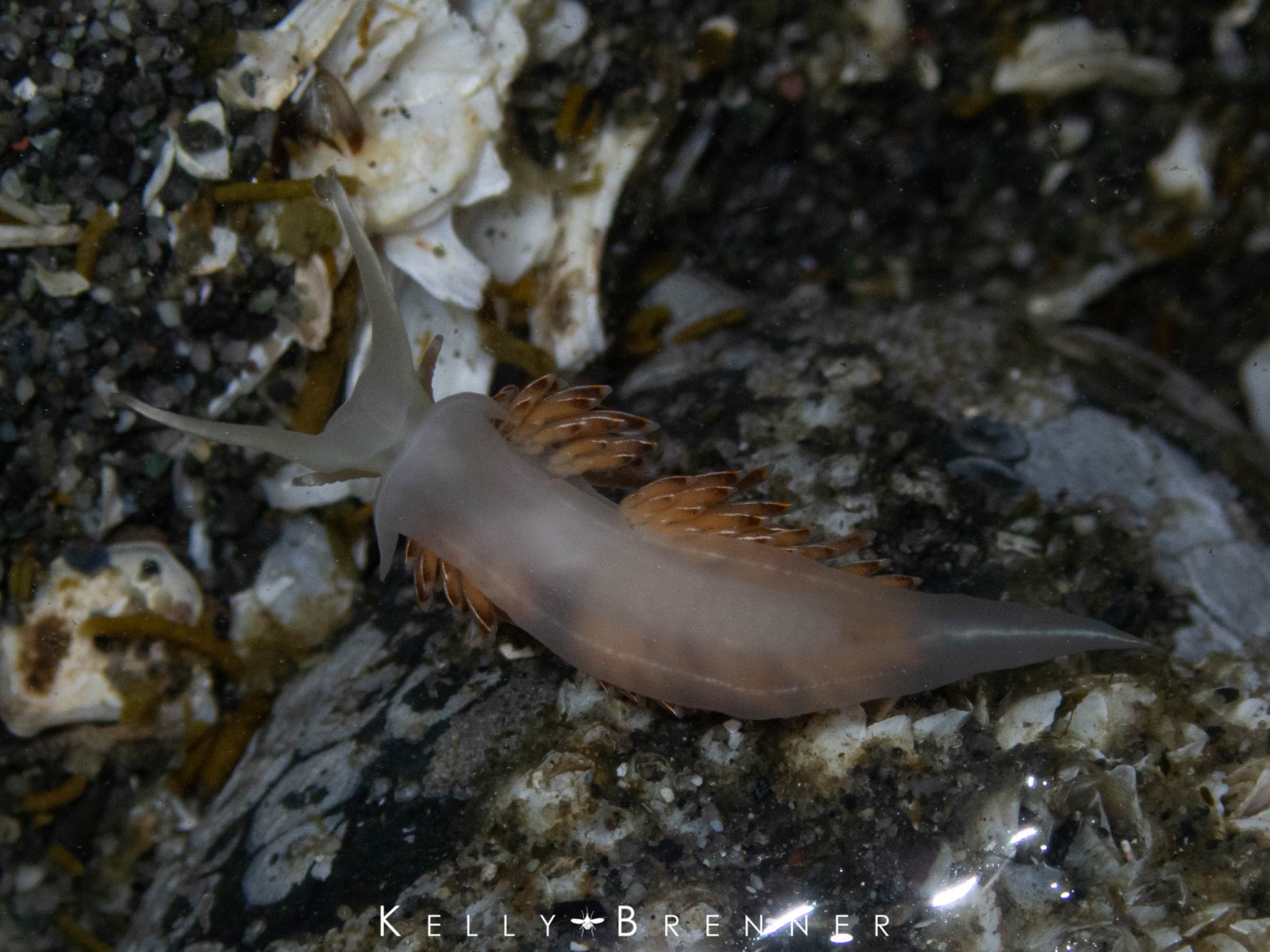 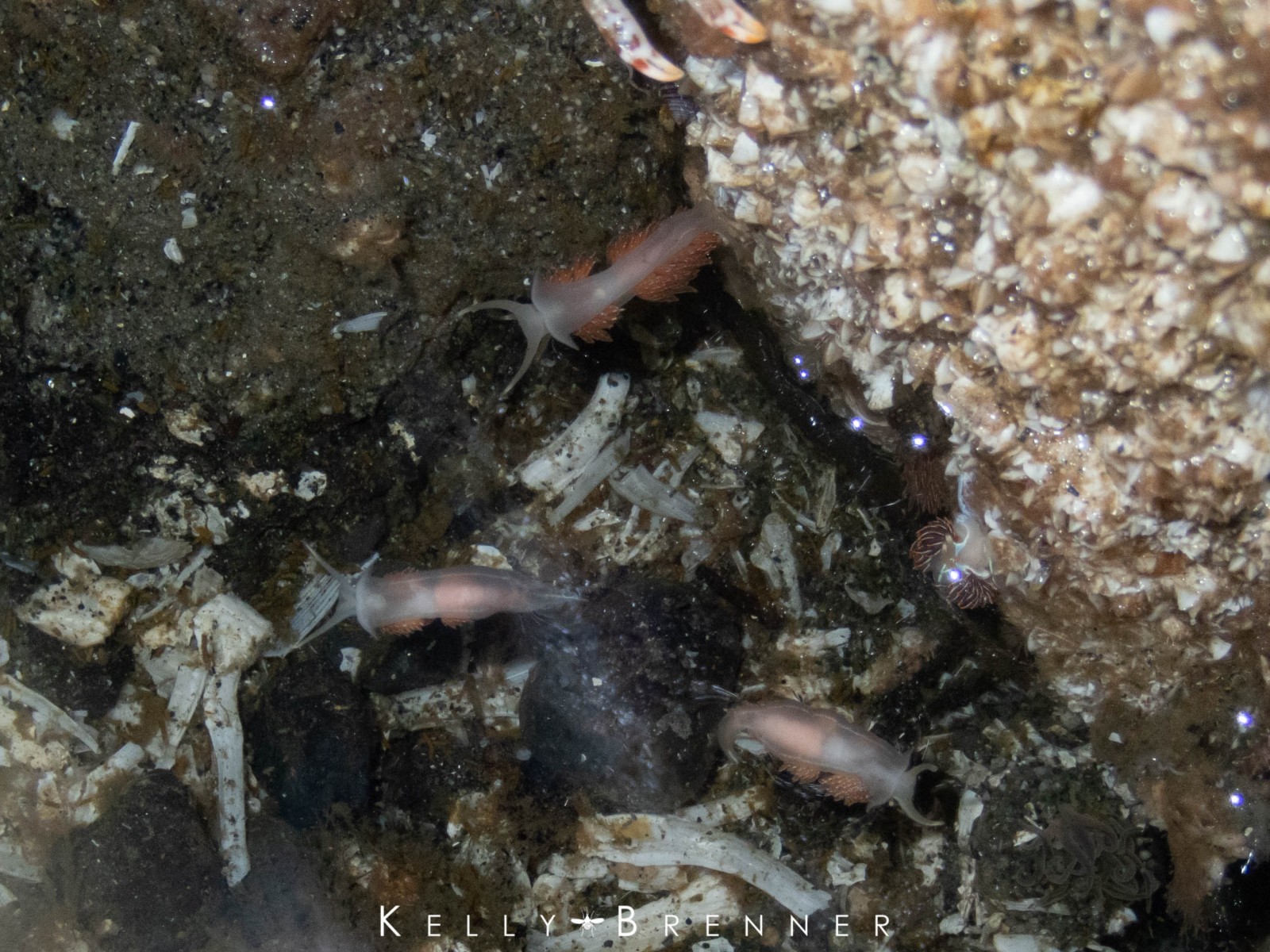 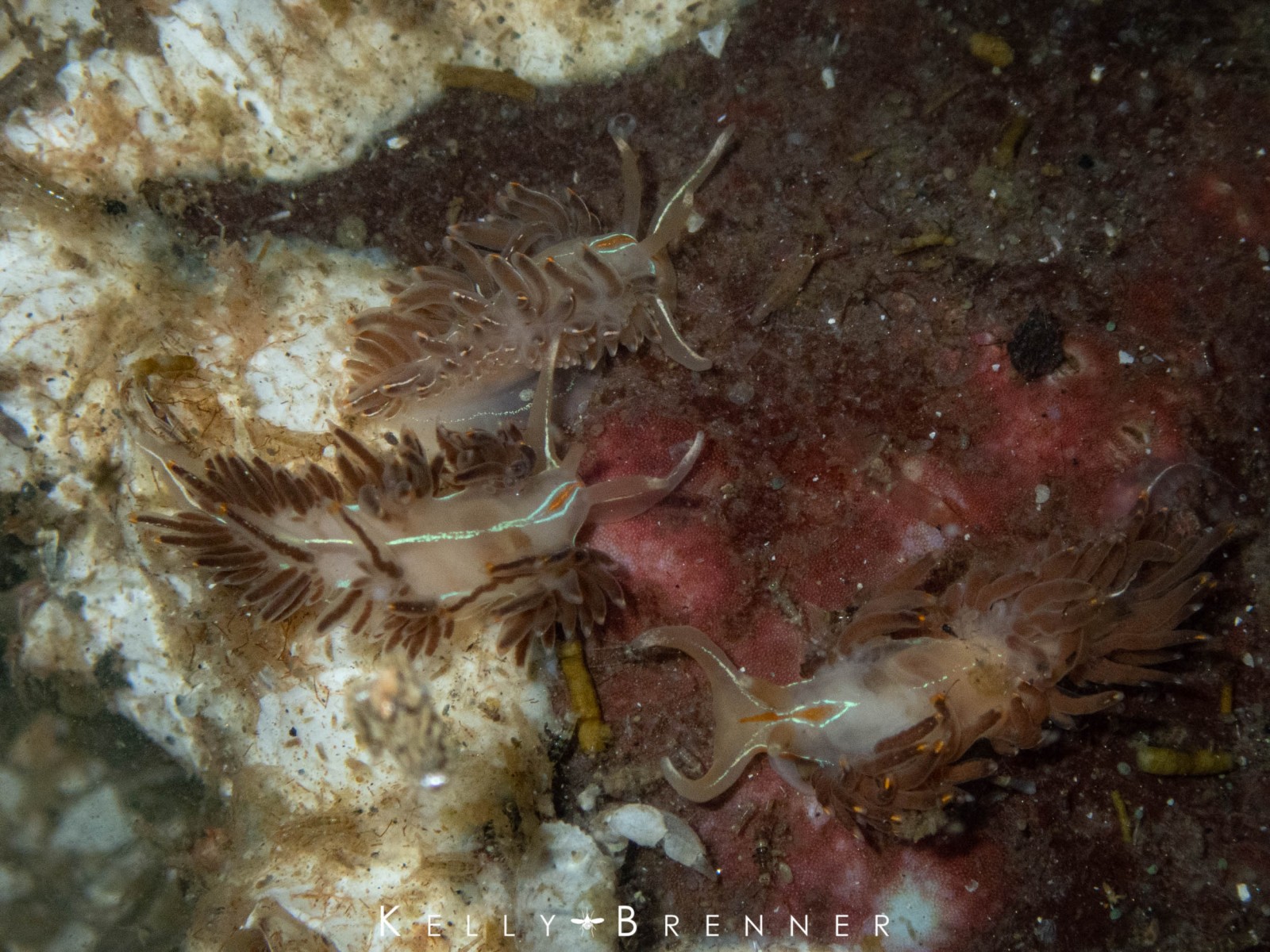 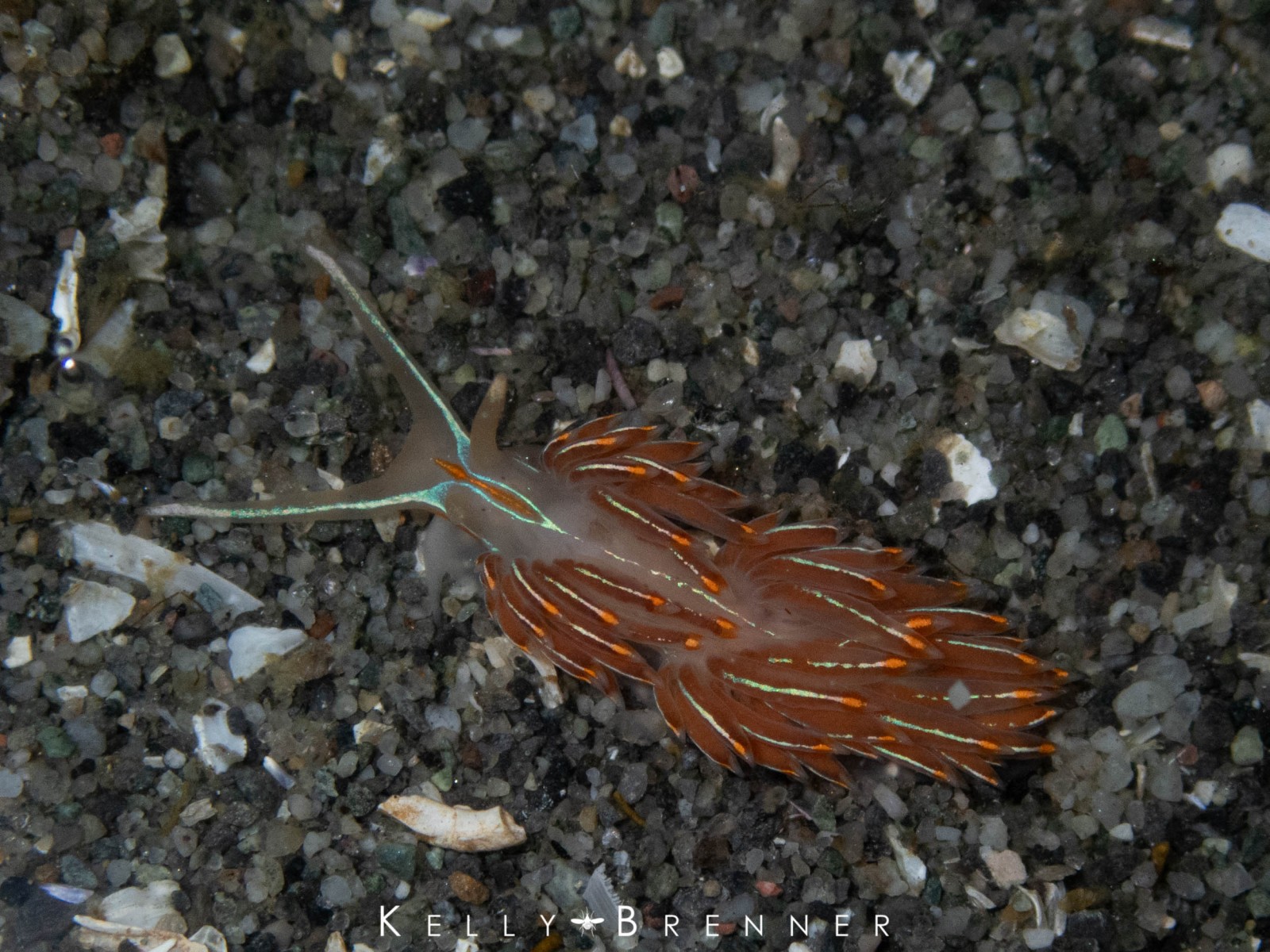 The Thick-horned Nudibranch (Hermissenda crassicornis) is always the most common species I find in Seattle. But this low tide took that to the extreme. Once the tide went out and exposed the base of the pillars under the dock, the nudibranch party was revealed. There were dozens of Thick-horned nudis all over. It became hard to count because there were so many and the more I looked, the more I saw. They were all different sizes, the smallest being less than half an inch and the largest over an inch. And because there were so many, so close together, it was easy and interesting to observe their color variations. Some had dark brown cerata and others were more pale. In addition to the nudibranchs, eggs covered the pillars and worm tubes and nearly every other stationary surface under the water. I saw eggs of Armina californica anchored in the sand, there were sea lemon eggs glued to the pillars and Thick-horned eggs on every possible surface. It was a proper nudibranch party. 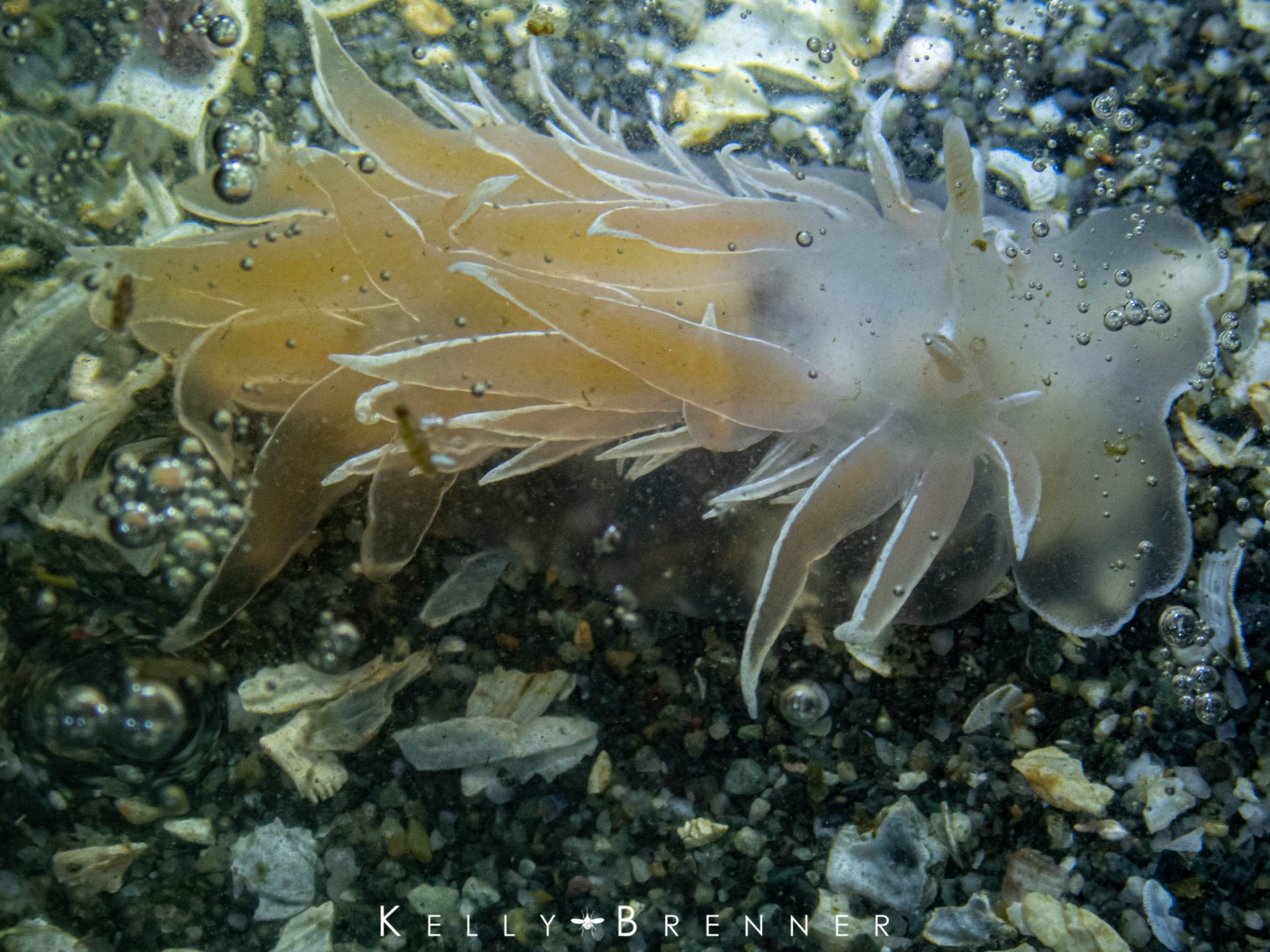 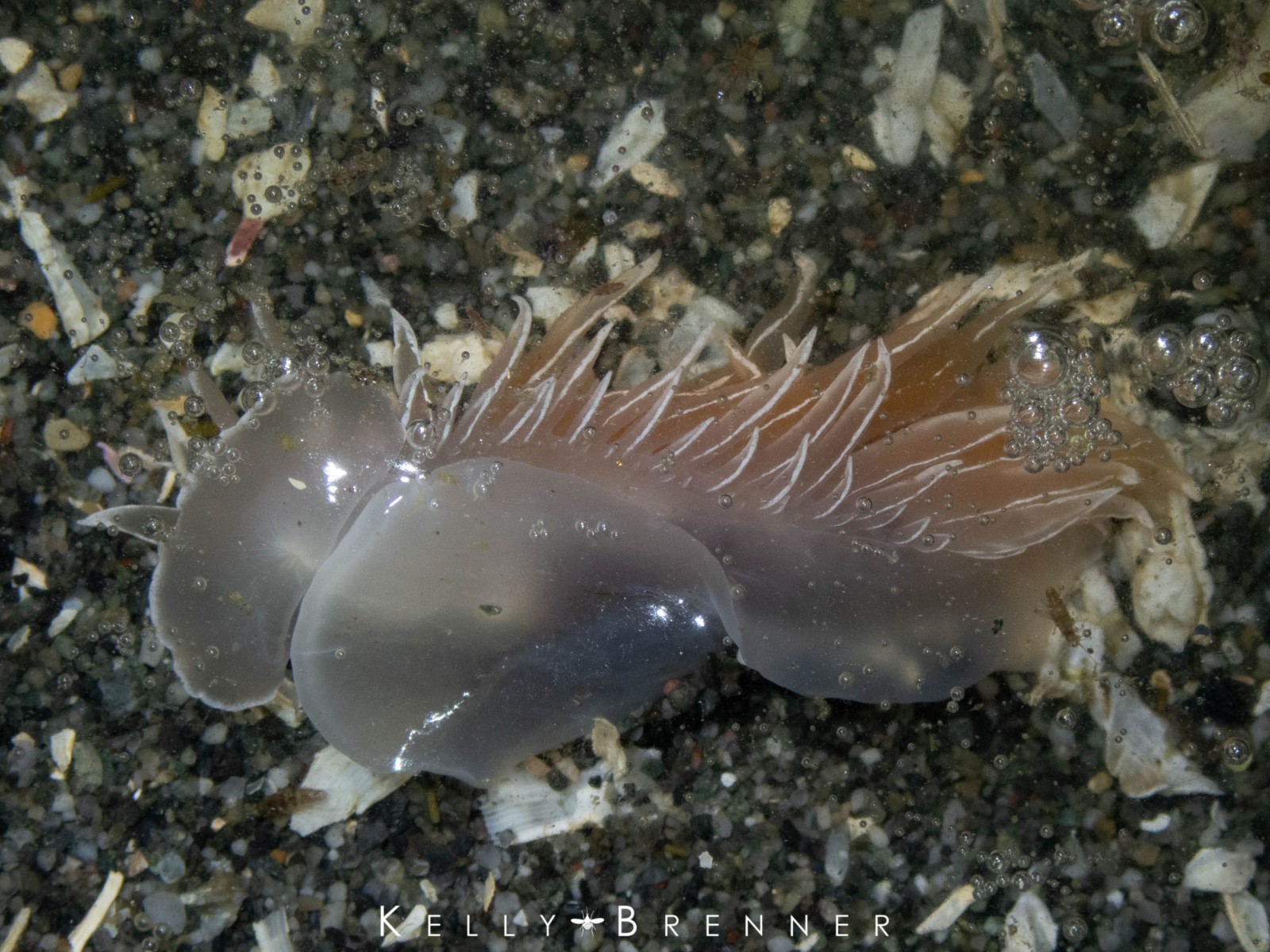 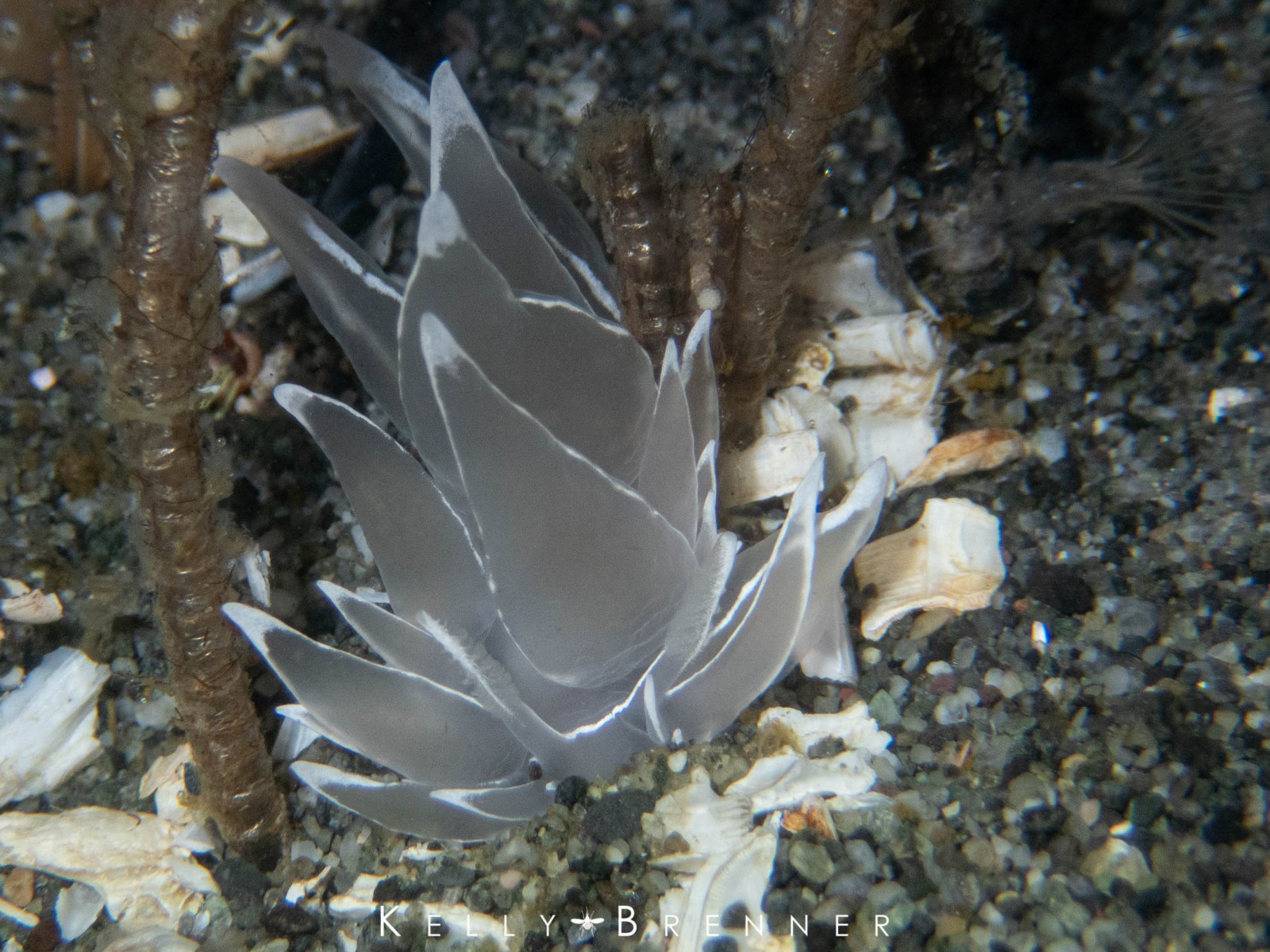 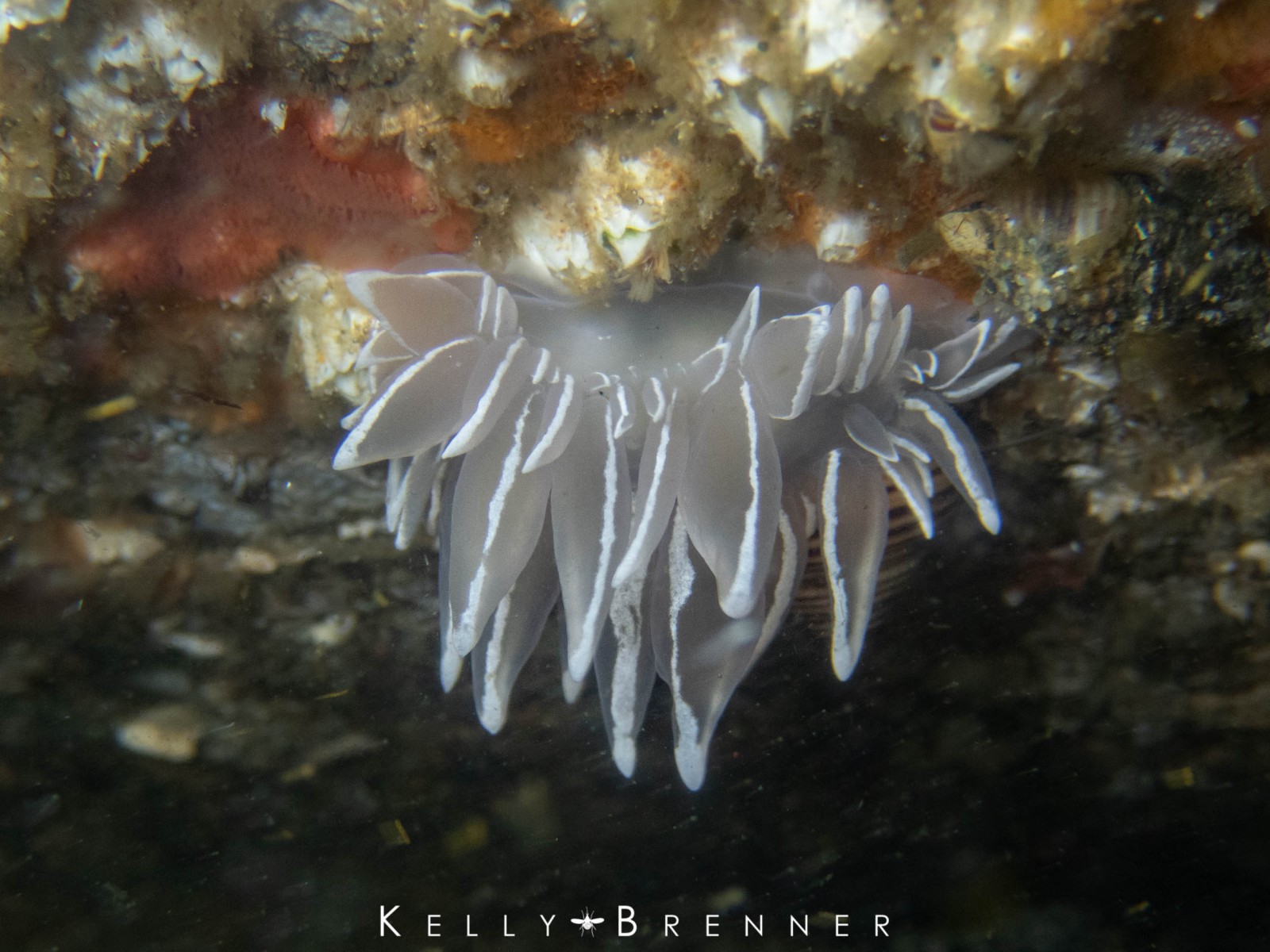 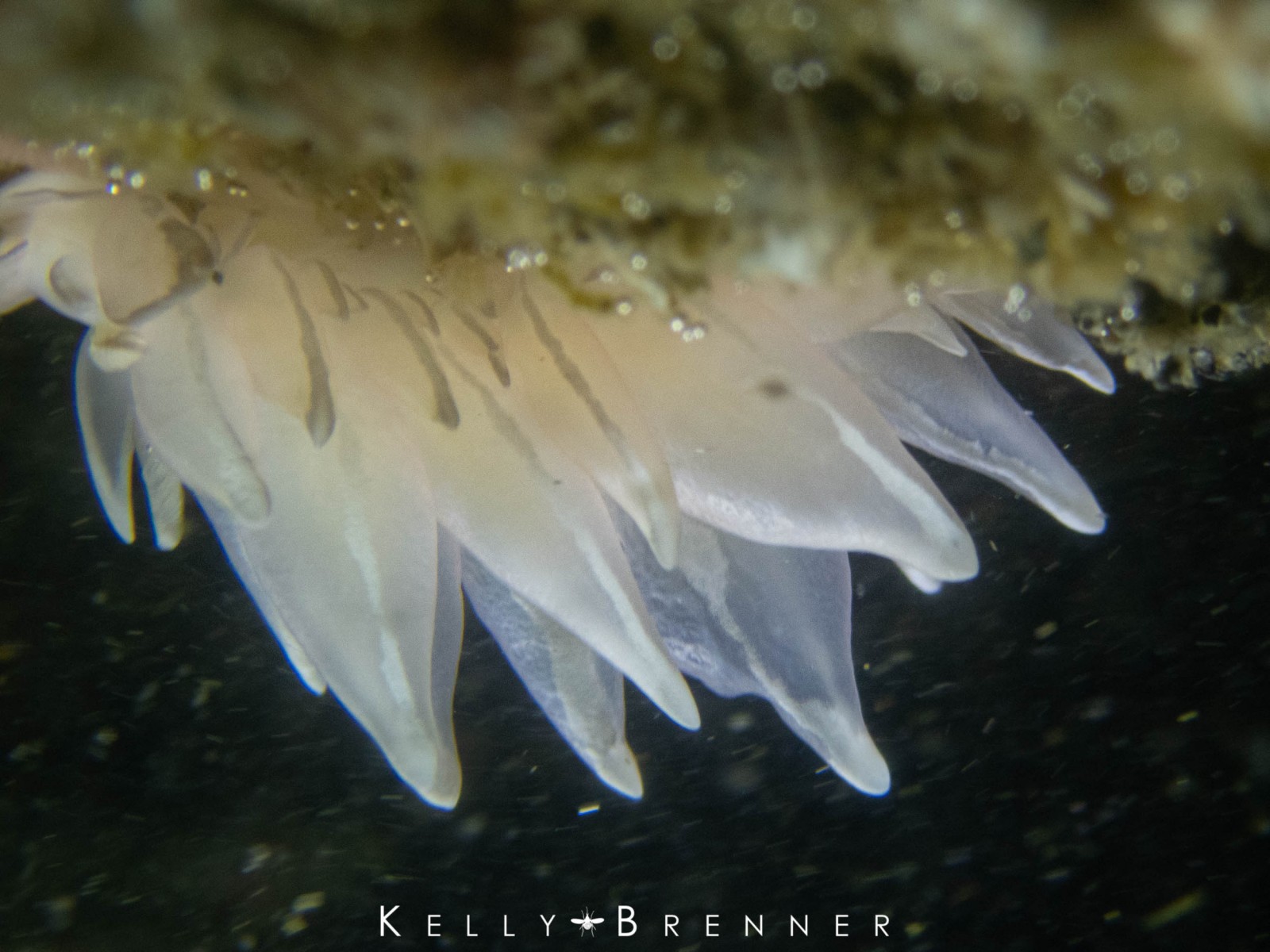 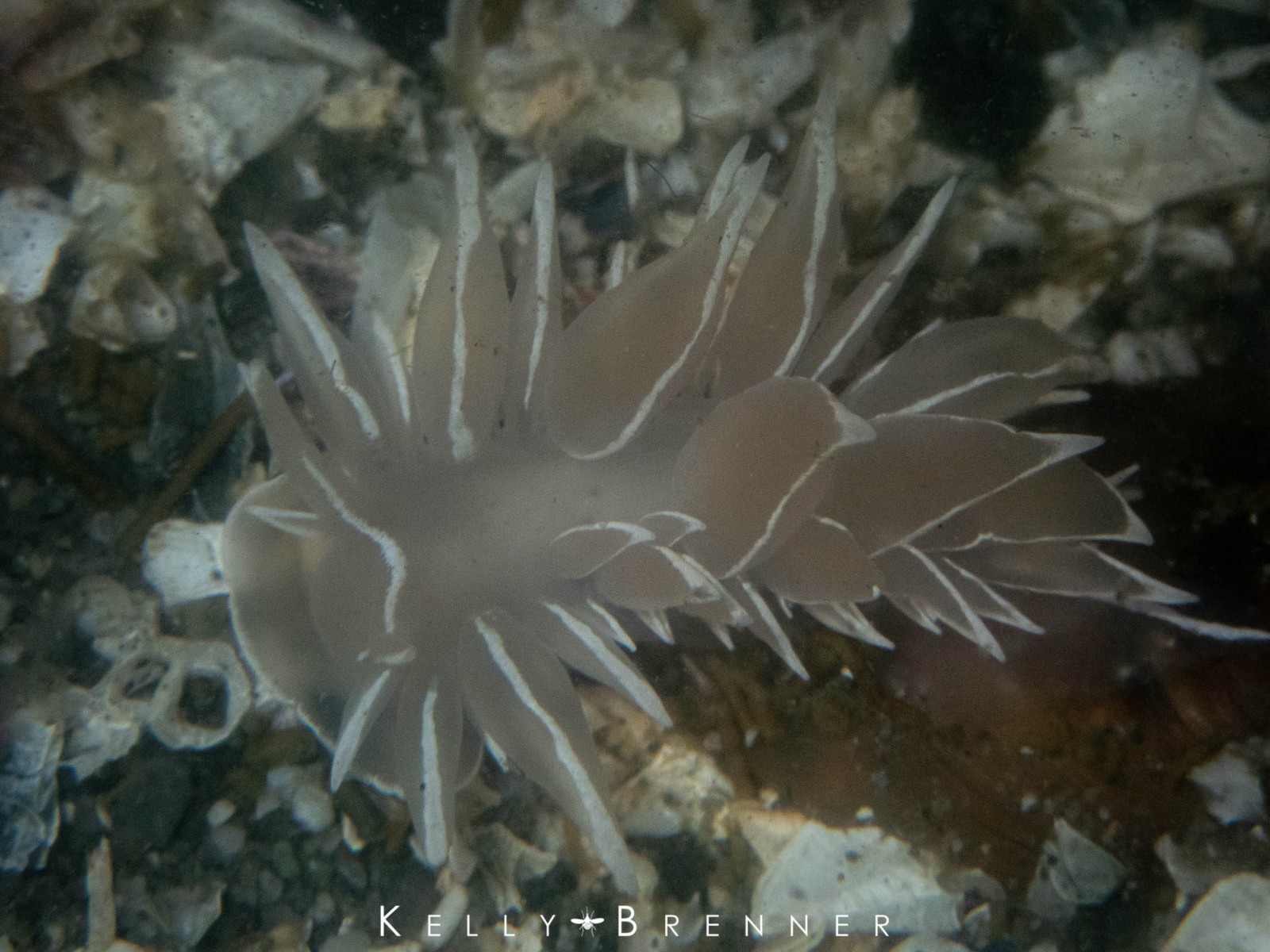 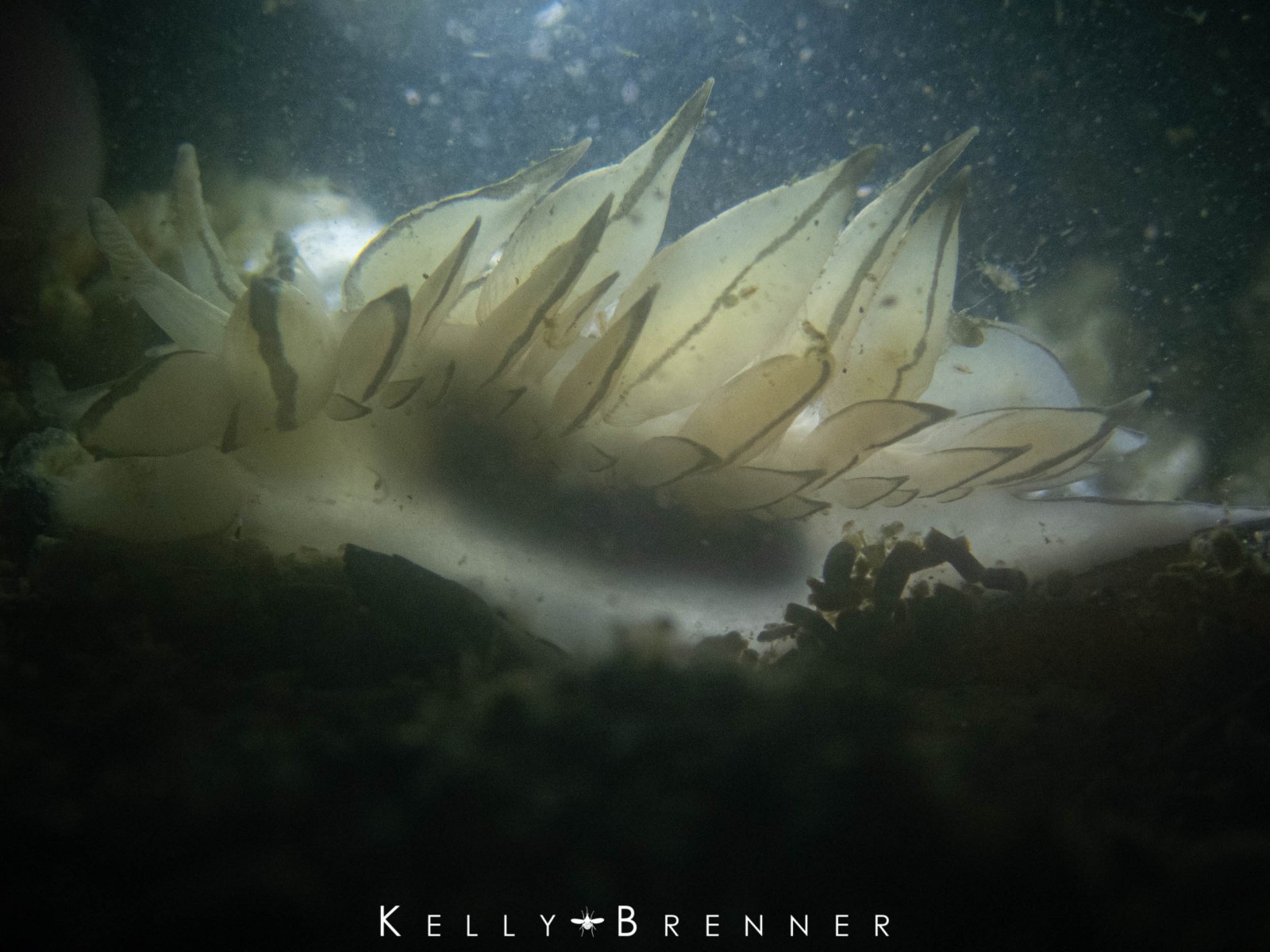 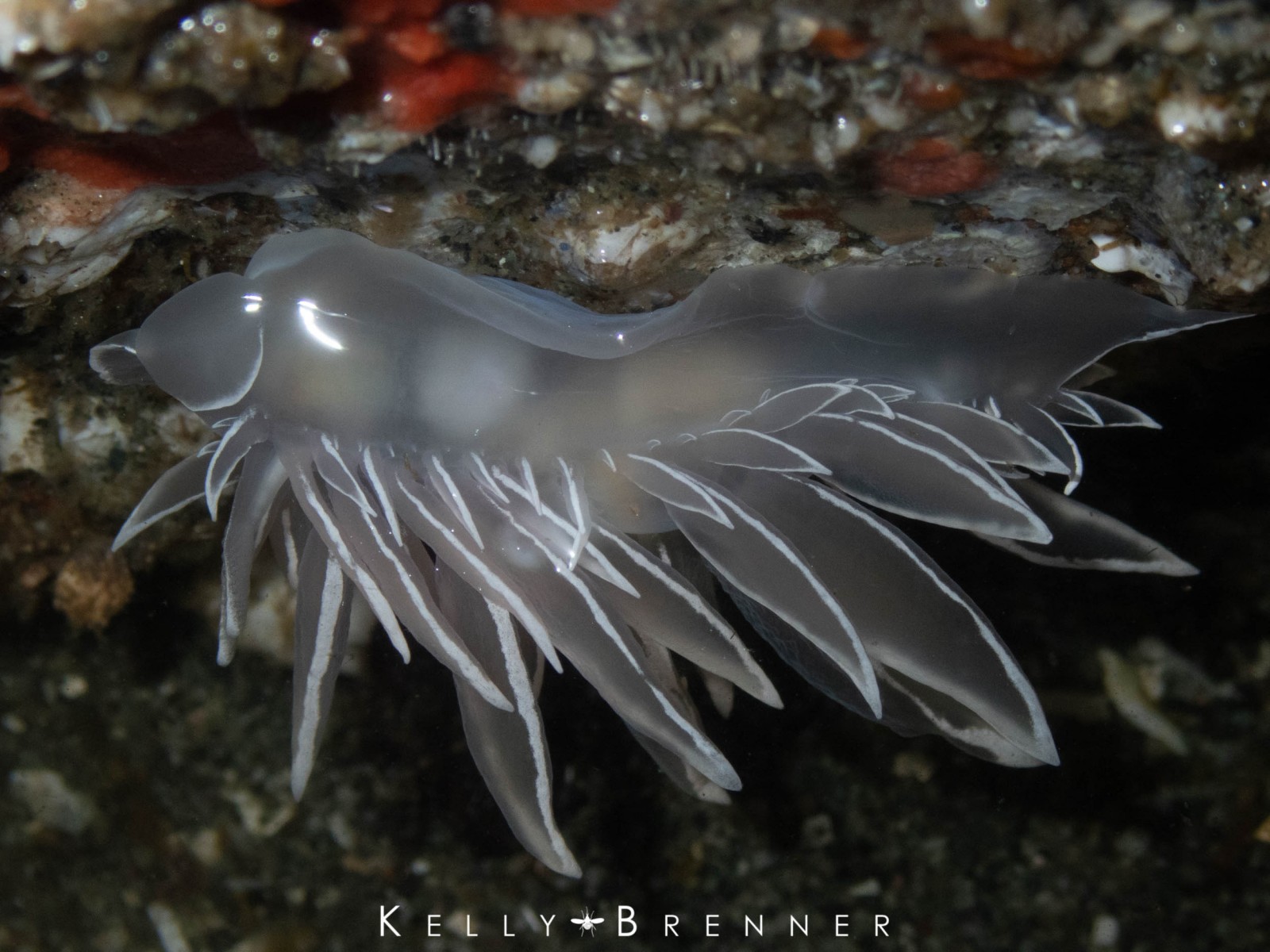 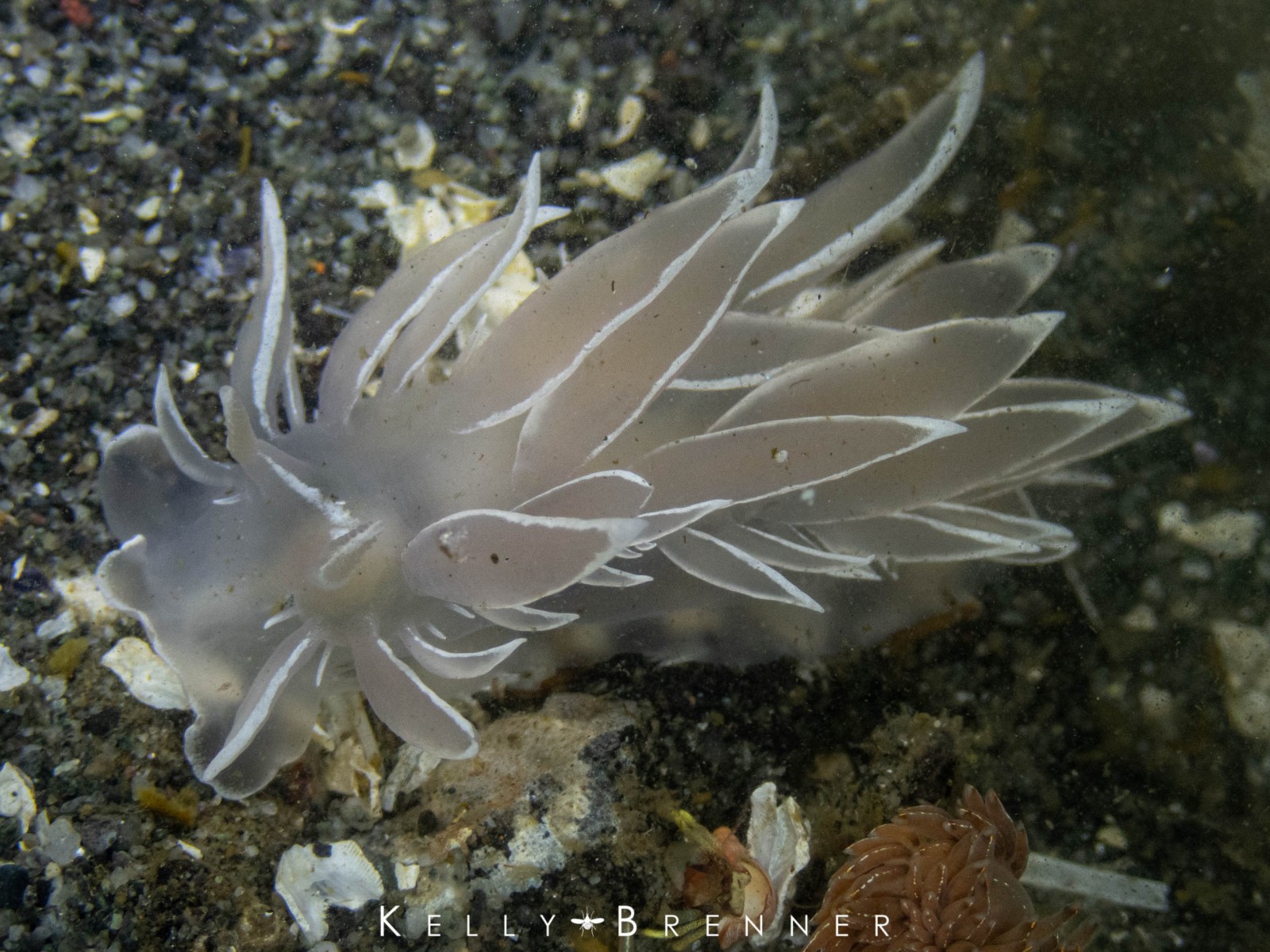 I’ve only seen the White-line Dirona (Dirona albolineata) once before at Constellation Beach in Seattle, but this time I encountered more than a dozen individuals. Another name for the this nudibranch is the Frosted Nudibranch, and an appropriate name it is because it does indeed look like ice frost. But some individuals can have a pink or orange hue, and I saw some which were a frosted white, but others which were more orange in color. They are quite a show-stopping species.

Monterey Dorids are almost as common in Seattle as the Thick-horned nudibranchs, and not only did I see their eggs at the ferry dock, but a few individuals as well. One was so thickly covered with sand it was barely visible.

The Red-gilled Dorid, or Nanaimo Dorid (Acanthodoris nanaimoensis) is another nudibranch I’d only seen once before, but found a pair of them at the ferry dock. Although I didn’t know that’s what I’d found until I returned home to my books. That’s because this species also has color variations. They are usually white, but the pair I saw were a purple brownish color. And they were in water that was particularly thick with sediment so it was hard to see them. However, the yellow tips on the tubercles and edge of the mantle, along with the red rhinophores and gills marked this as the Red-gilled Dorid.

I only saw my first Clown Dorid (Triopha catalinae) a month ago at Pillar Point in California, so I was ecstatic to find one in Seattle. But it was an absolute monster compared to the clowns I saw in California, which were pretty small. The clowns under the ferry dock were massive in size, at least five inches in length and were chunky compared to the dainty dorids at Pillar Point.

Leopard Dorids (Diaulula odonoghuei) are another fairly reliable species in Seattle so I wasn’t surprised to see one under the ferry dock. But regardless, they’re always fun to encounter. 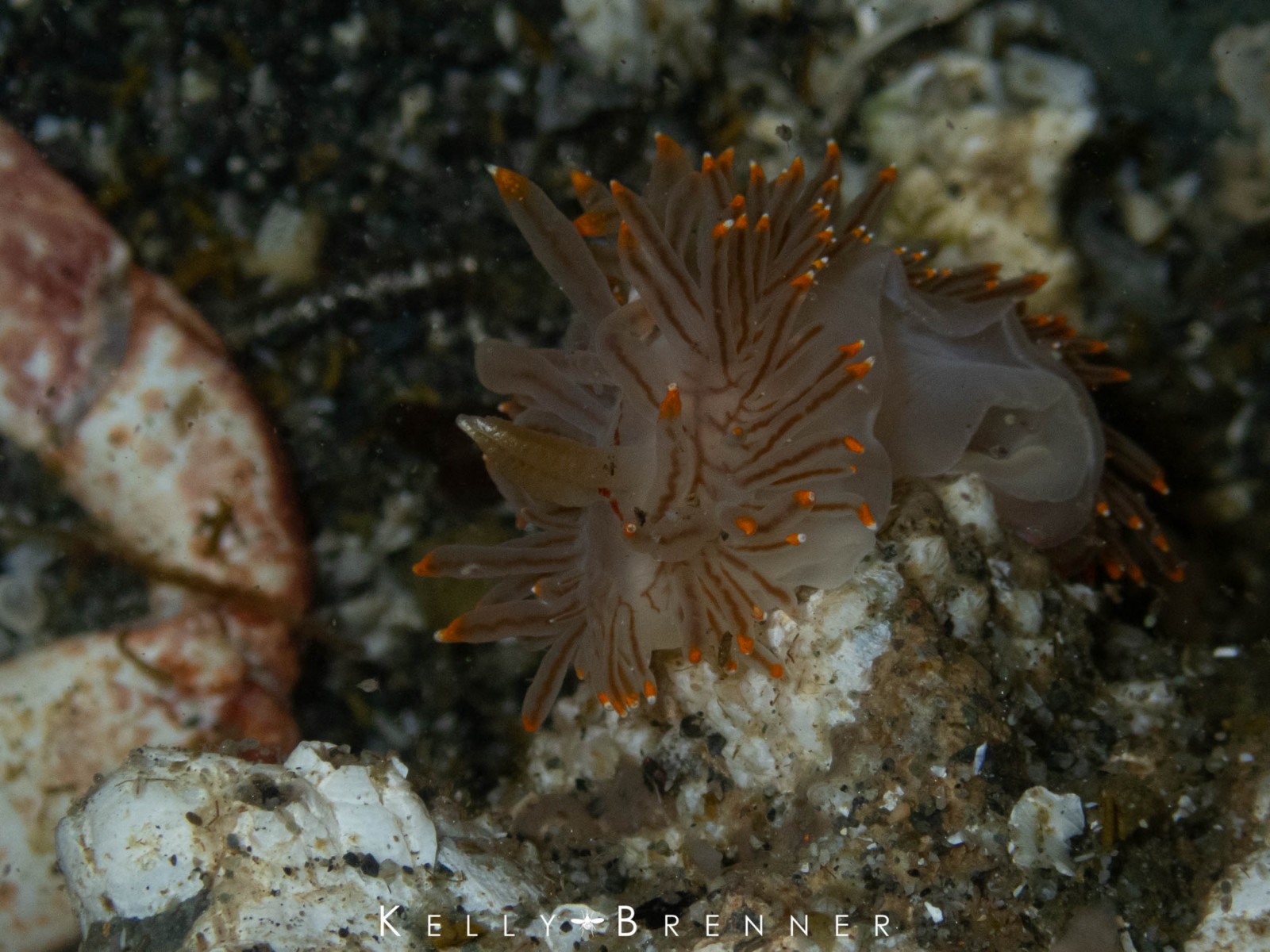 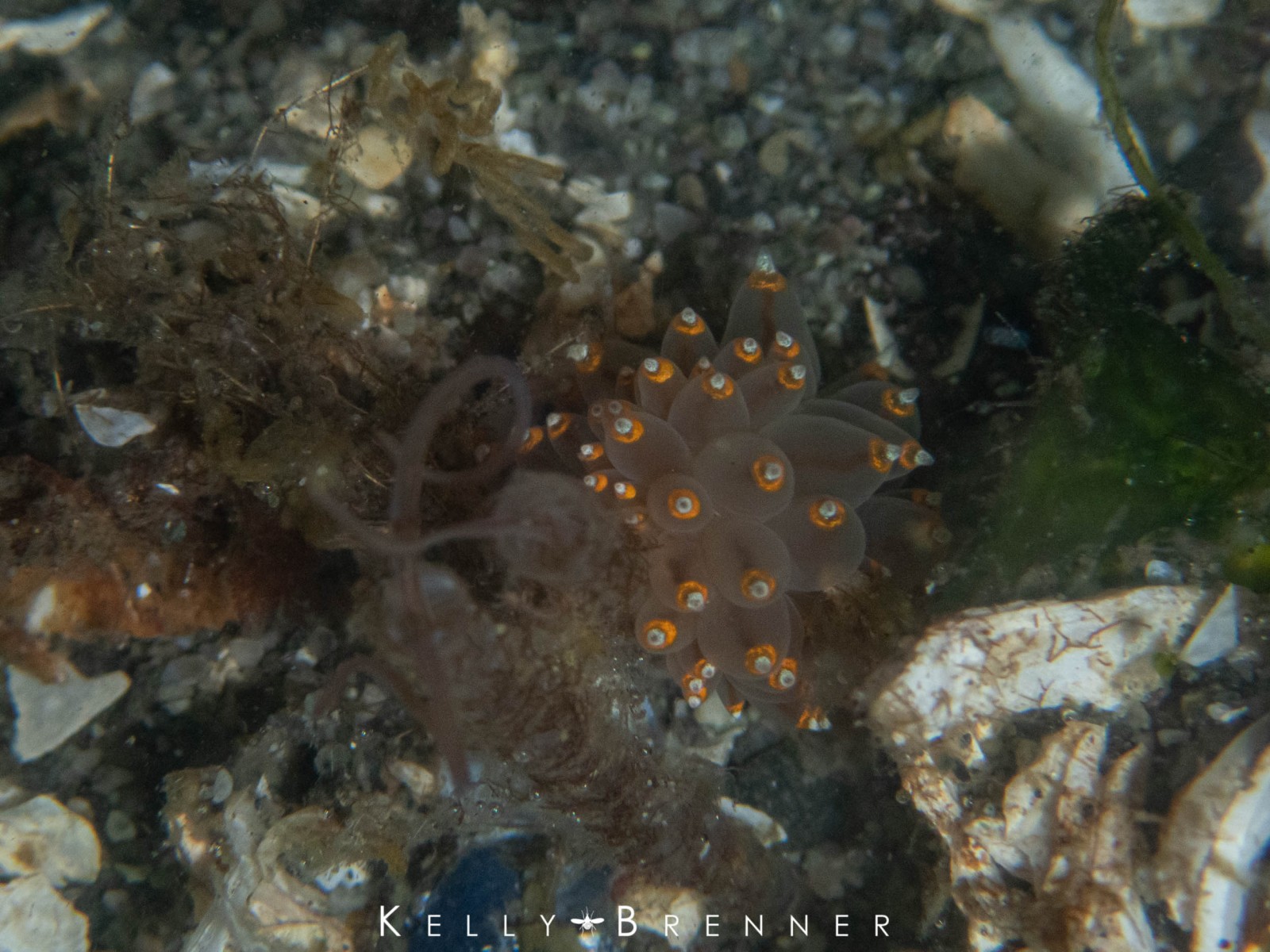 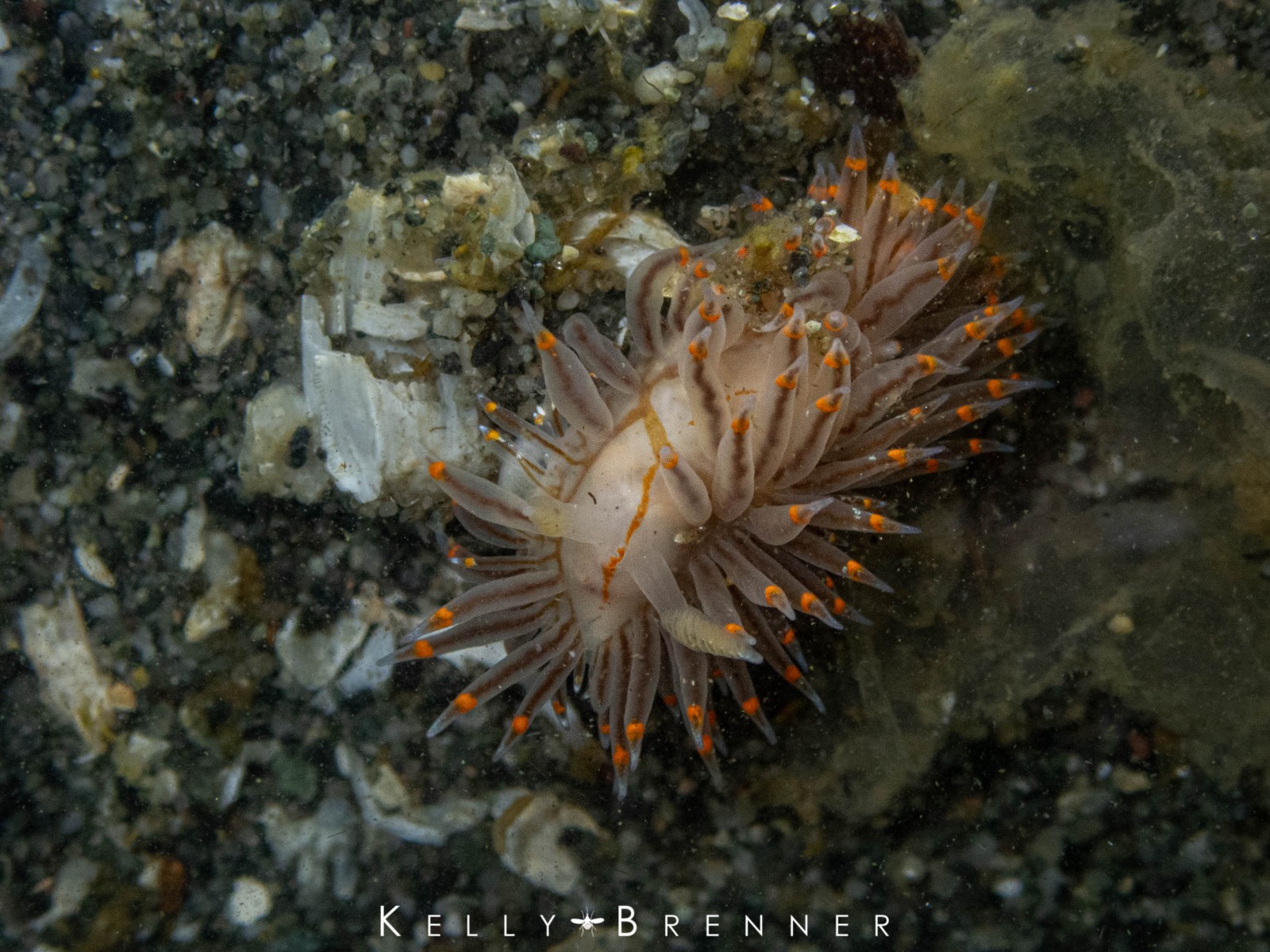 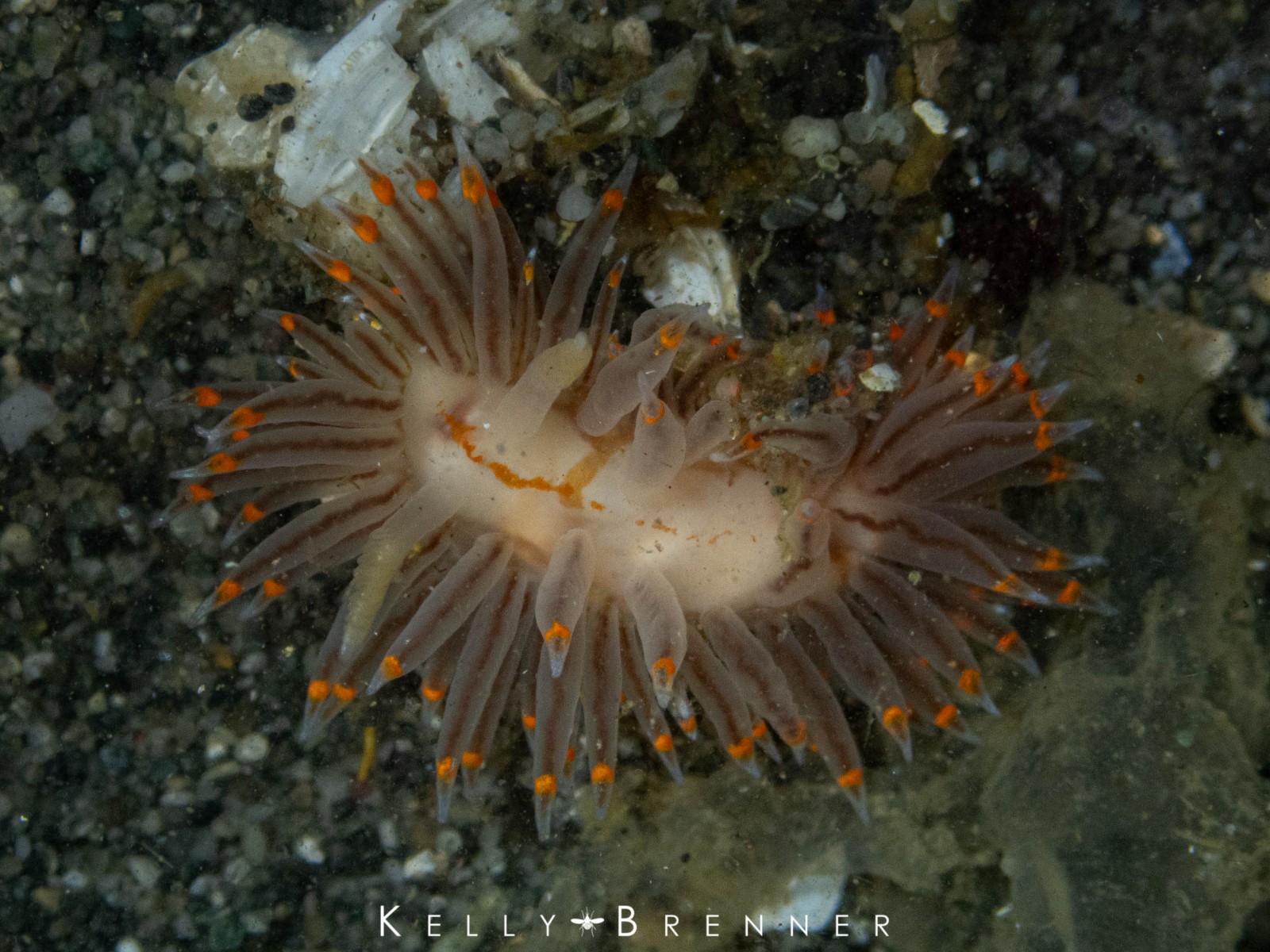 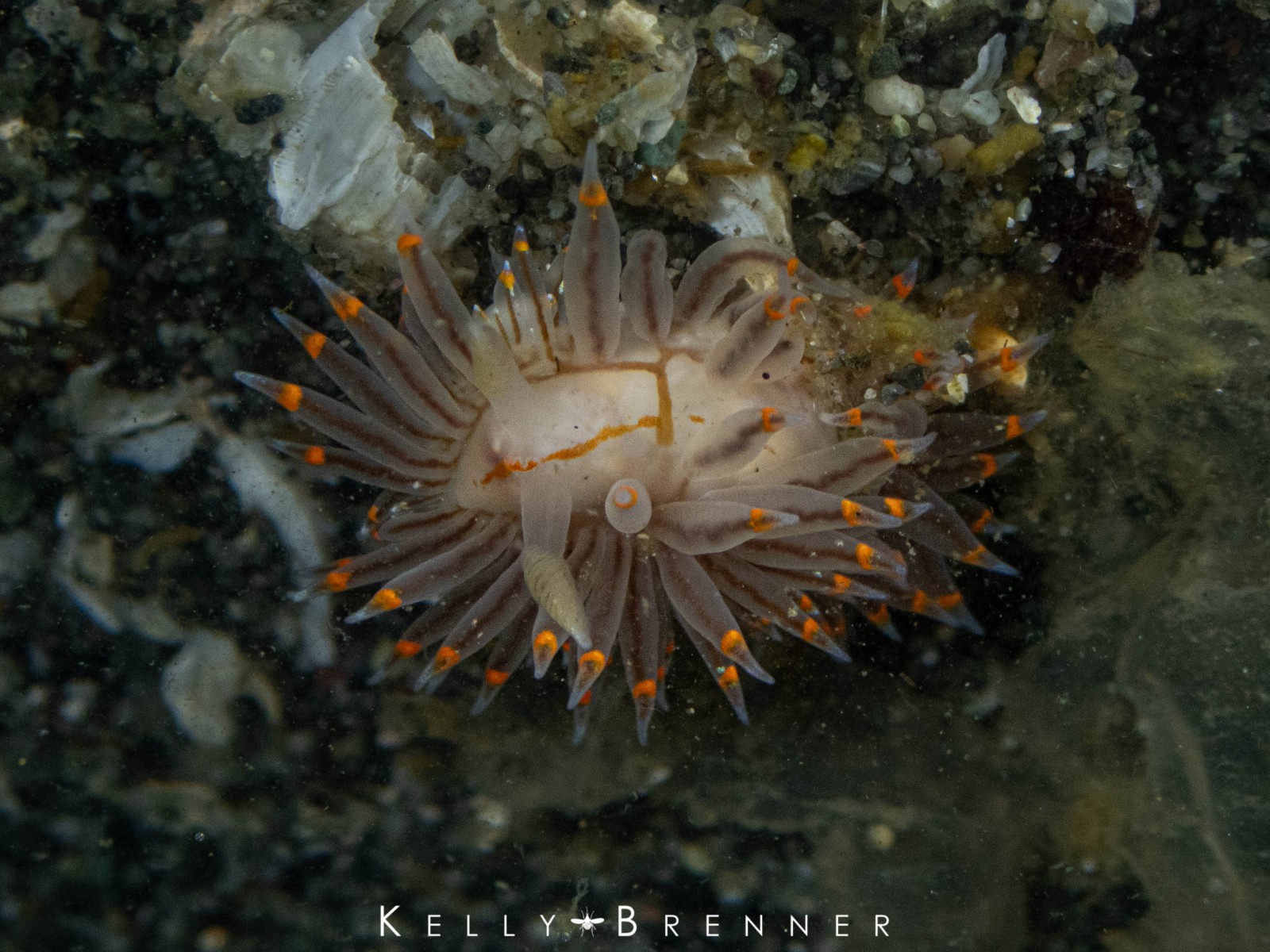 The species that was brand new to me was the White and Orange Tipped Nudibranch (Antiopella fusca). They’re not unlike the Thick-horned nudis at first glance, but they’re a little larger and lack the shiny blue coloration of the Thick-horns. When they are threatened, or disturbed by the current, they are known to roll into a ball and I found one in that position which had its cerata blown up like they were balloons.

Unfortunately, the conditions under the dock don’t make it easy to photograph the nudibranchs, but I’m accepting the challenge and hope next time to further improve my photography of these ferry dock nudibranchs.