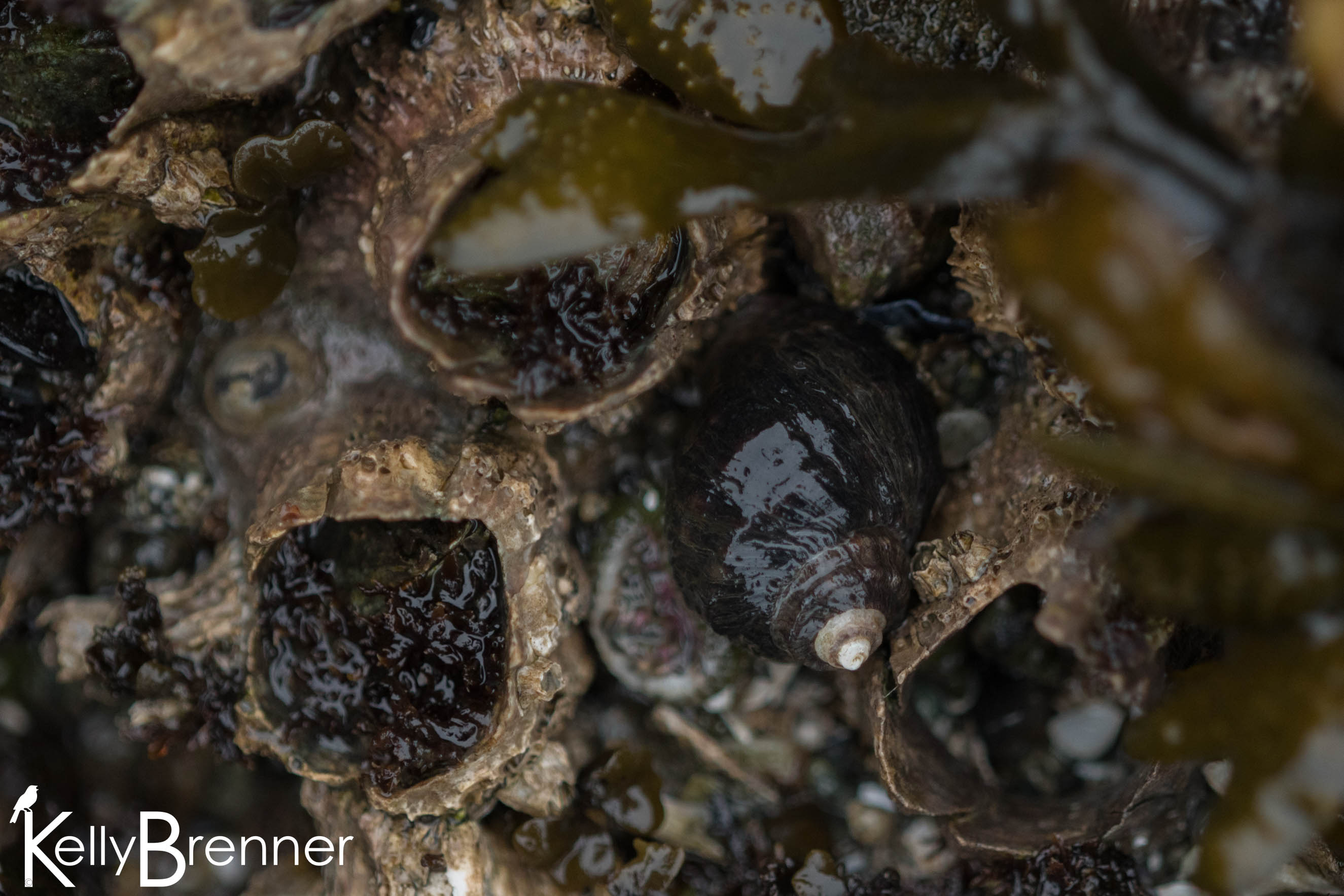 For my daughter’s fifth birthday she decided she wanted to visit Alki Beach to look for shore life. We checked the tides and decided to go there at lunch time and head down to the beach as the tide ebbed away after we ate. The tide was high still, barely any beach was visible, but we wanted to get out before the rains arrived. Fortunately, even during the high tide there’s still plenty to see and we started wandering along the beach. I spotted a large number of Brant Geese in the water, probably somewhere between 30-40 up and down the shoreline. Further up the beach was a flock of Sanderlings.

We investigated the rocks which were partially out of the water and found a few barnacles still feeding under the water, their delicate, lacy feet emerging and twisting in both directions before disappearing back inside. As we looked closely at the barnacle-covered rocks we found dozens of tiny snails, Periwinkles, among and in the empty barnacles. Some of the larger snails appeared to be parked for the low tide on seaweed leaves, but others were moving around and a couple I found attached to one another, likely mating. We gently pulled a couple of the larger snails off the barnacles and discovered the inside of the barnacles came with the snails. They had been eating the barnacles.

Also among the barnacles we found many sea anemones, which my daughter delighted in touching in their center to make them close up. I lifted up several rocks so we could look and see what was underneath. We found some rocks with many Isopods while others had dozens of Shore Crabs underneath. If we looked patiently, we could always find hermit crabs as well. Some were tiny, pulling themselves into their small homes, but others were large and only their back-ends fit inside the shells. We held them and waited for the crabs to emerge and crawl on our hands. I picked up one shore crab and it gripped my finger with its legs and didn’t let go until I put my finger back into the water.

As the tide revealed more rocks we discovered several large tube worms which were still out of their tubes. They looked like red paintbrushes with long, limp bristles hanging in the water. We watched them for a while until they either retreated into their tubes, or my daughter touched them, resulting in instant disappearance.

We found a pile of clam shells clustered together between rocks and I noticed one of the shells had something inside. I picked it up and saw what looked like eggs lining the insides of the shell. They were oblong with pointed ends while the bottoms were attached to the shell with a thin thread. Some were pink while others were more of a yellowish color. I posted a photo online later and found out they are likely the eggs from snails in the genus Nucella, also known as dog whelks or dog winkles. The same snails we observed eating the barnacles.

Pretty soon the rains arrived, but we kept searching the rocks on the outgoing tide until we made our way back up the beach.