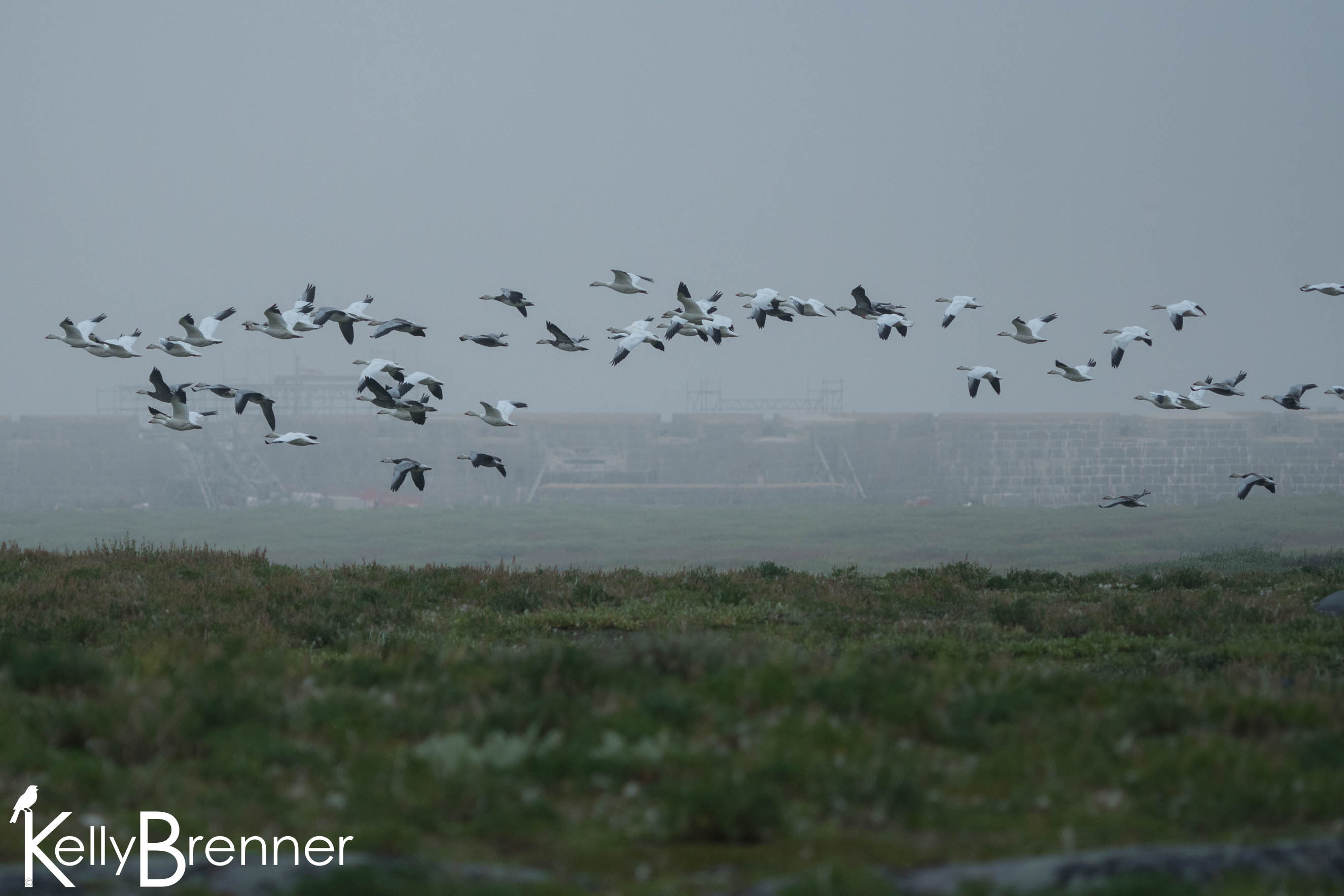 To get to Sloop Cove in Churchill, Manitoba, you have to cross the Churchill River on a zodiac. Our Churchill Northern Studies Centre group all squeezed into the boat and skimmed across the surface of the river for the short ride to the beach landing near the cove. We were met by our Parks Canada guide and bear spotter who would lead our tour from Sloop Cove to the Prince of Wales Fort two miles up to the mouth of the Churchill River. The weather was decent enough and we walked up to the top of a rocky hill where we were shown names etched into the stone. This wasn’t modern graffiti though, the names were carved in the 1700’s by employees of the Hudson’s Bay Company and now kept clear of lichen by Parks Canada. Among the names are harpooners, captains and carpenters, but perhaps the most well-known name is Samuel Hearne who surrendered the Prince of Wales Fort to the French. A book I picked up at the Itsanitaq Museum, Churchill Hudson Bay; A Guide to Natural and Cultural Heritage, has all the names listed and who they all were. Perhaps my favorite name was that of Alexander Menzies who was “dismissed for drunkenness by the sloop master George Holt, and was left behind at York to sail home on the Seahorse.”

In addition to the etched names I admired the crustose lichens which had been left to grow on the stone around the names and the serpentine miniature gardens which grew in the long cracks between plates of rock. To the west, from our vantage point on the small hill, we could see a field of snow geese browsing and in the cove itself, a couple of shorebirds foraging in the small pond. Our bear spotter gave the word to start moving and I had a momentary rush of adrenaline before I realized it was only because of the weather rolling in, not because a bear had been seen. Weather in Churchill can change suddenly and fortunately I had planned accordingly dressing in layers and wearing my boots.

We walked down the hill to a beach composed of sand and small rocks and, staying together so as not to spread out, looked at the beach. There were shells scattered among the rocks, but also fossils, and I picked up a coral fossil which was shared by our guide. There were other things on the beach too, tracks. The first we encountered were wolf tracks in the sand. The second tracks we found were polar bear and they were enormous. The third type of tracks were caribou making me wonder about the order the tracks were laid down. We also encountered wolf and polar bear scat along the beach. The guide had seen a wolf in the area very recently and we all kept our eyes open, hoping to see a wolf or a bear, although a bear preferably from a distance.

A thick fog was heading for us and our guide and bear spotter kept us moving along the beach in a group. Fog poses a problem for the bear spotter for obvious reasons but our tour leaders were calm and obviously used to the constantly changing situation as they efficiently ushered us along. From the beach we climbed up a steep rock face before coming up to a trail through the l0w-growing plants out in the open. We looked at various flowers and saw some butterwort (Pinguicula) which is a carnivorous plant, growing in the middle of the path.

Birds flew past us all the time, many of them whimbrels, but also arctic terns up high and snow geese on the horizon. Our tour guide told us she had seen the wolf near a pond we were passing the previous day and we all stared, hoping to see it ourselves, but failing to do so. As we neared the fort a large flock of snow geese flew in front of us. As we walked by the dock, the previous tour was just casting off and amid the three boats, humps of white appeared. The white were beluga whales which come to this exact place every year to have their calves. It was the closest I’d seen them on this trip and I was excited about getting up close in the boats when it was our turn to leave. At the fort we were able to look around and out at the mouth of the Churchill River, but still no bears were around.

Our boat arrived to pick us up,  it wasn’t a zodiac like I had seen, but a larger vessel. The minute we stepped on board an enormous shot rang out and I immediately thought it was a bear spotter shooting a warning at a bear. Then I realized there was nobody left out on the land, everyone was now on a boat and as the rain began I knew it had been thunder. Quite loud thunder. Within a minute of leaving the dock the rain poured down in buckets. The river had turned rough so I had to sit and I could see no whales. We were all drenched within a matter of minutes, a rather dramatic end to our tour.