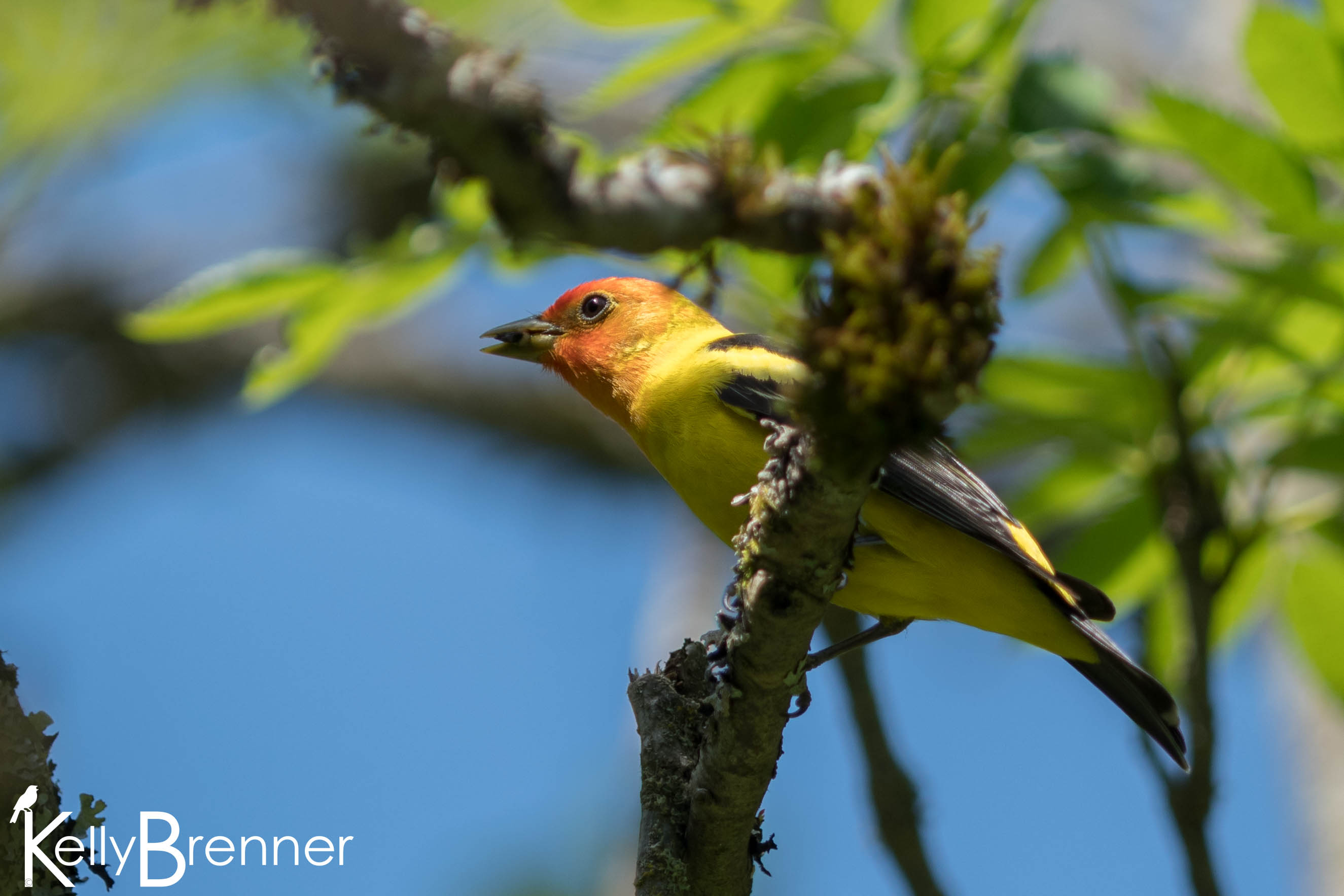 Over the last two weeks I’ve encountered a couple of unusual birds visiting Washington Park Arboretum. Last week as the kids from my daughter’s outdoor forest preschool played in the meadow after school, we noticed some colorful birds flying around in the ash trees. They were Western Tanagers, bright red and yellow birds which are hard to miss. I rarely see them in Seattle and it was lucky they were flying around on a sunny day and I had my camera to take some photos. They never sat perched long, constantly flying away from the tree they were in to catch flying insects, before returning to a branch. I caught several photos of the tanagers with insects in their beaks.

This week an even more exciting bird visited the arboretum. After I dropped my daughter off at her school I heard Steller’s Jays making alarm calls right outside her forest classroom. I searched the Western Red Cedar trees expecting to find a Barred Owl or perhaps a Cooper’s Hawk. The tree is large with very dense vegetation and it took some time before I spotted a bird resting on a branch. It was dark, raining and very hard to see but I realized it was something unusual. I ran back to my car to get my binoculars and hurried back, the bird waiting in the same place. I raised the binoculars and what I saw confused me. It wasn’t either of the birds I was expecting and because of that my mind had to process the unexpected information. I decided it was a miniature Great Horned Owl, which I had spotted in the arboretum last year during my 365 Nature Project.

Of course it wasn’t a miniature Great Horned Owl, so my mind processed it as the next plausible thing, a Western Screech Owl. I made these conclusions based on the owl’s size, it was small, much smaller than a Great Horned Owl and even smaller than a Barred Owl. And it had ears, not many owls have ears. After looking at my bird apps I questioned my identification because while the Western Screech Owl does sometimes have a brown tone, the coloring and markings didn’t look correct. At pickup time, four hours later, I returned with my camera. Fortunately it had stopped raining, although it was still dark, especially in the trees. I looked again and realized it was an even less likely visitor, a Long Eared Owl.

The jays showed up again along with a crow to harass the owl. Several times the jays swooped over the owl, actively hitting it on its head. Once the owl responded by spreading its wings, either to catch its balance to to appear more menacing. After the jays and crows left the owl had time to ponder the running and screaming kids under its tree. Apparently it deemed them not a threat and decided to try and take a nap.

It was quite an exciting find in the arboretum as they are not regular visitors to Seattle. I messaged Larry Hubbell from the Union Bay Watch blog and he came to view the owl and photograph it. He just published his post and beautiful photos about the owl, who it turns out was a female, in The Lioness.

I’ve checked the trees in the area, and listened for jays, each day since she visited, but haven’t seen or heard anything since. But it was nice that she passed through and allowed not only myself and Larry to see her, but some of the teachers, parents and kids from the class as well.