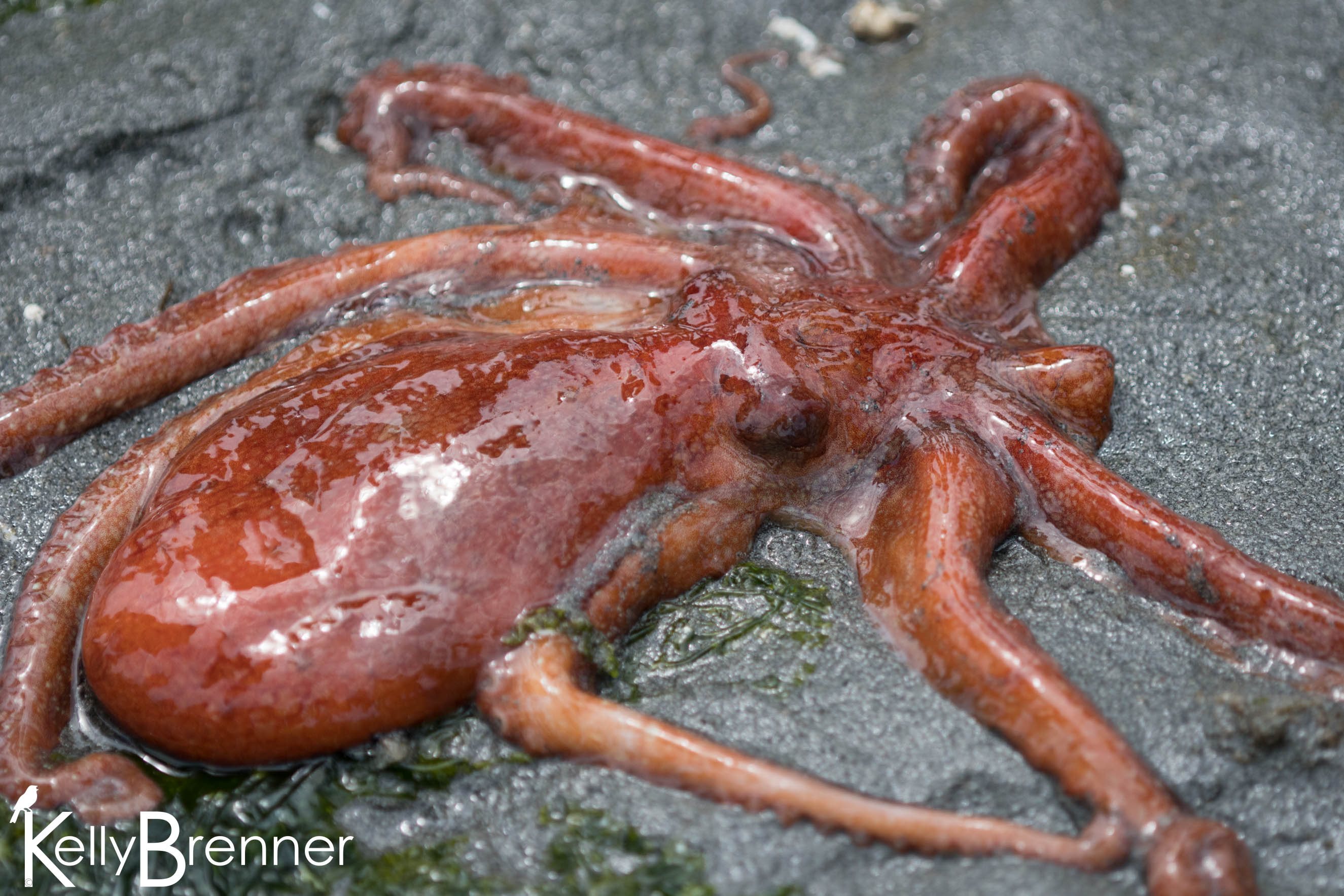 The very low tides I enjoyed at Scenic Beach State Park over the weekend continued and I didn’t want to miss out. So on the Monday after returning from Hood Canal, I took my daughter to Alki Beach in Seattle to explore. I had already had some great finds at Alki during the low tides at the end of May and it seems I always find something interesting there. The Seattle Aquarium’s Beach Naturalists were already searching and I was bitterly disappointed to hear from them that a Humpback Whale and swam by not more than a half an hour before we arrived. Fortunately, Alki Beach could never disappoint entirely, and there was much yet to be discovered.

My daughter and I first searched the long stretch of rocks, but remembering the moon snail I’d found on the outgoing tide last time we turned towards the beach instead. We spotted a washed up moon jelly and a gull eating a fish when we heard some excitement from people by the rocks. I thought I heard the word ‘octopus’ and I quickly walked over. Sure enough, somebody had spotted a bright red, but fairly small octopus sitting on the sand. A small crowd had gathered around the octopus and the beach naturalists talked about it and answered questions. They said we could touch it and I wasted no time reaching my finger down. I felt the soft skin and then placed my finger next to one arm of the octopus. Almost immediately it lifted its arm to my finger and started exploring with its tentacles, wrapping the tiny tip of its arm around my finger. All too soon the beach naturalist picked the octopus up, the arm being pulled from my finger, and deposited into a plastic container of water. I watched the octopus morph from a flat, red pancake into a three dimensional creature floating in the water.

Once they had taken it to deeper, and cooler water and let it go, I continued my exploration. Another beach naturalist pointed out some red sculpin eggs clustered together between rocks and a large pair of sea lemons with their ribbon-like yellow eggs. It looked like they were actively laying eggs. My daughter pointed out a dead beetle on the seaweed which I pondered before finding other, more alive beetles wandering around the rocks. I found one tiny opalescent nudibranch before I saw a small group of people clustered on the sandy beach where we had initially started. We wandered over and found a moon snail half dug into the sand waiting out the low tide.