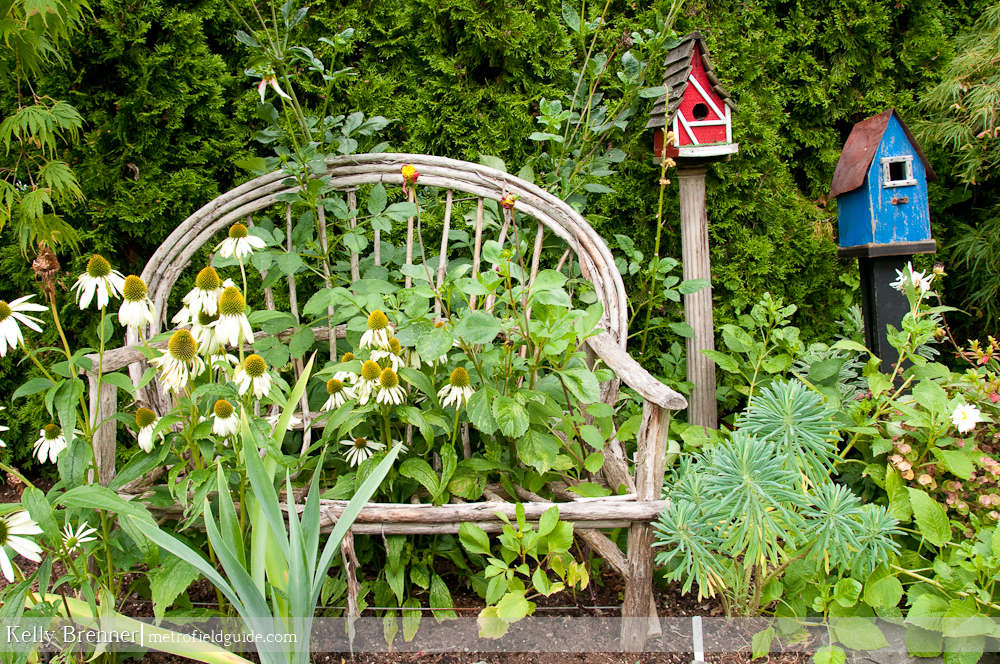 This past weekend I attended the Puget Sound Bird Fest in Edmonds, Washington. Part of the schedule was a wildlife habitat demonstration garden as well as a tour of five backyard habitats. The demonstration garden was the first stop and has it’s own story which I will post separately about soon. This post will focus on the five very different backyard habitat gardens I visited.

Edmonds is a small town, just north of Seattle, which sits on the Puget Sound in Snohomish County and is probably the best known as the residence of travel host Rick Steves.

While the yards were all quite dramatically different, they each offered the essential habitat requirements of food, water, shelter and a place to raise young. Among the lessons that can be drawn from these gardens is how to balance an interest with habitat. In two cases the interest was horticultural, a collection of Japanese Maples in one yard while dahlias and cactus were a focus of another and in a third case chickens were integrated with the habitat. It was also fascinating to see how creatively each had solved problems and added their own personal touches.

It was very interesting to see these yards and how the owners had interpreted their landscape and surroundings and created their own habitat using their own design vision. It’s an excellent example of how very diverse habitat design can be when it’s adapted by different people with different needs and wants. This was really a lesson in how to take the textbook directions for creating habitat and make them work for the individual. As a result, each yard has a very definite personality.

Let’s take a look at each backyard habitat. More photos of all of the yards can be found on the Flickr page: Edmonds Backyard Wildlife Tour.

The first home is set in a forested landscape on the side of a hill and the yard blends nicely with the surroundings. It’s a very peaceful and tranquil garden and a nice balance of nature and aesthetics. The yard is full of native plantings such as ferns, Salal, Oregon Grape and Huckleberries along with ornamental flowers in various containers. There are several brush piles and bird houses throughout the yard. The backyard has three levels, the first being the patio of the house while up a set of stairs leads to the second level with another patio area and large lawn leading to a second set of stairs up to the highest level. From the top there is a nice viewing area that overlooks the patio and house below while behind, tall Douglas Fir trees tower over the yard.

One of the real gems of the landscape is the pond and waterfall which is situated between the side of a hill  and the house where it’s overlooked from the inside through floor to ceiling windows.  It’s in an ideal location for wildlife with cover close by, but it’s also an ideal location aesthetically since it can be viewed from inside as well as outside and the reflection on the windows from the outside is very nice. Spotted Towhees bath in the waterfall and other birds have been seen in the yard including Pileated Woodpeckers, Anna’s Hummingbirds, and most recently, a Barred Owl.

One of the details that was particularly nice visual was a recurring placement of large, blue containers set on their side and buried half into the soil. Various plants grew in and around the containers, themsleves which brought a nice, bright color to the landscape where green and brown dominate, particularly during the winter. The containers could also serve a habitat function as a shelter for wildlife, particularly frogs.

The second home couldn’t have been more different, it was like going from the forested mountains to the beach. Although this home was also set on the side of a hill and also had multiple levels in the yard, it was in contrast quite open. From the top level and the deck the Puget Sound could be seen and the owner borrowed from that by pulling in elements and really tying them together. Even while down in the lower part of the garden, where the Sound can’t be seen, it can be felt in the landscape. In the ten years the owner has lived there, tons of concrete have been removed and replaced with a large pond and waterfall and many plantings including a number in containers. The transformation couldn’t be more dramatic.

The owner collects Japanese Maples, which are abundant throughout the garden and in many containers, and must be spectacular in the fall. Bird houses, another collection by the owner, are also abundant although only some for the birds while the rest are for the owner. There is detail everywhere throughout the garden in the form of plants, containers, bird houses, boots filled with plants, bird baths, benches and garden art. No corner has been overlooked. It’s a yard one could spend a day in and still miss something.

The owners of the third residence have an interest in chickens and many can be found here of all different breeds, shapes, sizes and colors. They are beneficial for keeping slugs under control as well as being fun to watch. The backyard is divided into a landscaped area and a chicken run in the back half with a fence that can be opened to let the chickens out to roam the yard and eat slugs. In the yard are large trees, layered  plantings, ponds, several fountains and a certain humor as is demonstrated by faces on the trees.

Like the second habitat, this one also has a lot of hidden details in the form of containers, sculptures and yard art, and yet it has a different feel again from either of the first two landscapes. There are a number of native plants, but also a lot of ornamentals mixed in, many of them in containers. The yard manages to balance uses, providing multiple living spaces for the owners and the chickens, who also have their own space, with the wildlife.

The birds certainly appreciate the yard as was apparent from the variety of bird calls that could be heard from the street. The owners have seen a variety of birds including Cedar Waxwings, Bushtits, Varied Thrushes and  Townsend Warblers. It would be an interesting study to see what impact the chickens have, if any, on the wild birds such as competing for food or territory, particularly for ground foraging birds such as thrush family.

The fourth garden has been certified for 20 years and has become a reliable home for a variety of birds including Spotted Towhees, Northern Flickers, Bushtits, Downy Woodpeckers, American Goldfinches and Townsend Warblers. This yard is smaller than the first three, but nonetheless productive for the owner as well as wildlife. There are living spaces for the owner as well as fruit trees and blueberry plants, while there are also a variety of native plants and trees for the wildlife including Serviceberry and Snowberry.

This yard is a good example of a more traditional, suburban landscape that also provides wildlife habitat. Some of the highlights are the side yards, both of which are narrow, but provide a walkway surrounded by plants. The narrow path of stepping stones encourages the walker to move slowly and notice the plants. Another small detail are the plants growing between many of the stones in the walkways and patio space which soften the hardscaping and add color. Fall and winter color is added in the form of mosaics set in concrete around the yard to be found upon closer inspection.

The final yard has the impressive feat of being completed in only four, short years. When the owners moved into their house they immediately set about creating a certifiable habitat. This yard pulls more than double duty for the wildlife and owners. Both of the owners have horticulture interests, one in cactus and the other in dahlias. The dahlia garden also hosts a variety of reused items including old garbage cans used for composting, milk jugs as mini greenhouses, and posts for dragonfly perches.

For the wildlife there is a pond, up to 3 1/2 feet deep, with flat stones and large rocks around it for resting. There is a rock hill made from rocks found in the soil and put together in a pile for snake habitat. Shelter includes a bat house and several bird houses as well as a brush pile and plenty of leaf litter. Nesting material is also provided and the owners let plants go to seed to offer food for the birds. In the front yard are hummingbird and butterfly gardens planted with Red Twig Dogwood, Red Flowering Currant, Mock Orange and Twinberry among others.

There are an impressive amount of plants considering there was a lone tree, three shrubs and a lot of grass when they started. They have collected plants from a wide range of places including plant sales, clearance selections, donations, rescues, neighbors and by propagation. Now they have over 500 plants. Like the rest of the gardens, there is a balance of ornamentals and native plantings. There is a very successful native plant garden in one corner including Indian Plum, Nootka Rose, Salmonberry and Mock Orange with plans to introduce more natives throughout the garden.

The enthusiasm of this yard and the owners is simply amazing. I’m inspired by all of these gardens and particularly how each owner achieved habitat in such unique ways.

The Life of the Lady Beetle

A little less than a month ago I noticed something interesting in the clover on my balcony. Along with the problematic aphids, I now saw a few small, black insects. They were clustered together and upon further inspection I found