We talk about ecology a lot, but what is it really? Chances are, unless you took some ecology classes you may have missed out on some aspects of ecology. A better understanding of ecology can help with designing and creating any wildlife habitat. Additionally, the more you know about ecology the better you’ll understand articles or books and find it easier to explain concepts and educate others. Let’s start with the basics, what exactly is ecology?

Ecology- the relationship between organisms and the environment (from the Greek words oikos, home, and logos, to study).

How do these all connect? A group of one type of organism that lives in an area is a population while all the populations in an area together are a community. The community of living organisms live in a nonliving surrounding which is an ecosystem. The living organisms are considered biotic while the nonliving components, such as chemical and physical elements are abiotic. All of the ecosystems together create the biosphere which can be thought of as the global ecosystem. There are two types of organisms, autotrophs are organisms that can manufacture their own food through cellular respiration and photosynthesis such as with plants. Heterotrophs are organisms that take in preformed nutrients such as animals.

Living things are all classified, a process that has its own long, complicated, but fascinating history. Groups of individuals that are the same are considered a species while a group of related species are gathered as a genus. For example, those familiar with botanic names of plants know that Acer is a Maple, which is the genus. So in Acer macrophyllum (Big Leaf Maple), macrophyllum is the species name. It goes even higher than that with similar genera grouped into families, similar families into orders, similar orders into classes, similar classes into phyla (divisions in plants), similar phyla into kingdoms and similar kingdoms into the top of the heap, domains. All organisms were originally related and changes through time because of evolution, created diversity.

There are dozens of terms you’ve no doubt encountered such as succession, natural selection, niche, carrying capacity, competition, diversity, food chain/food web, keystone species, biodiversity and so on (let’s cover these in future posts). 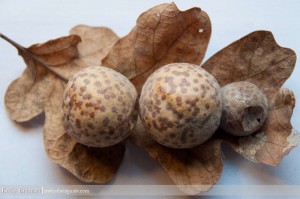 If you don't follow on Facebook or Twitter then you probably miss some of the interesting tidbits I post there. So that you don't miss out I'm going to start posting 'Foragings' periodically, which will be some of those interesting

Retaining walls are a fact of life for many landscapes, even those with only a slight slope. The majority of walls however, are constructed as a flat surface, stones bound together with mortar