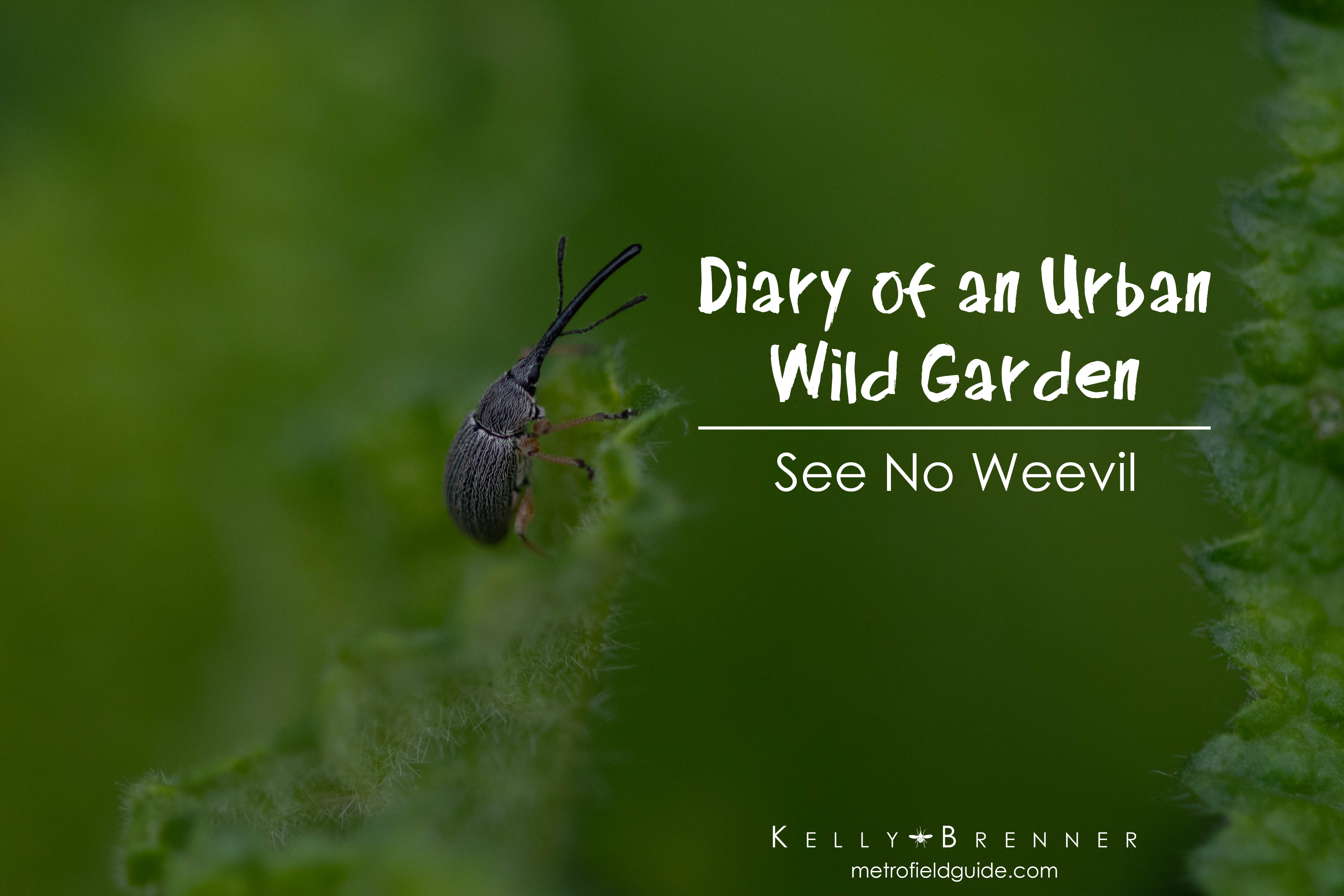 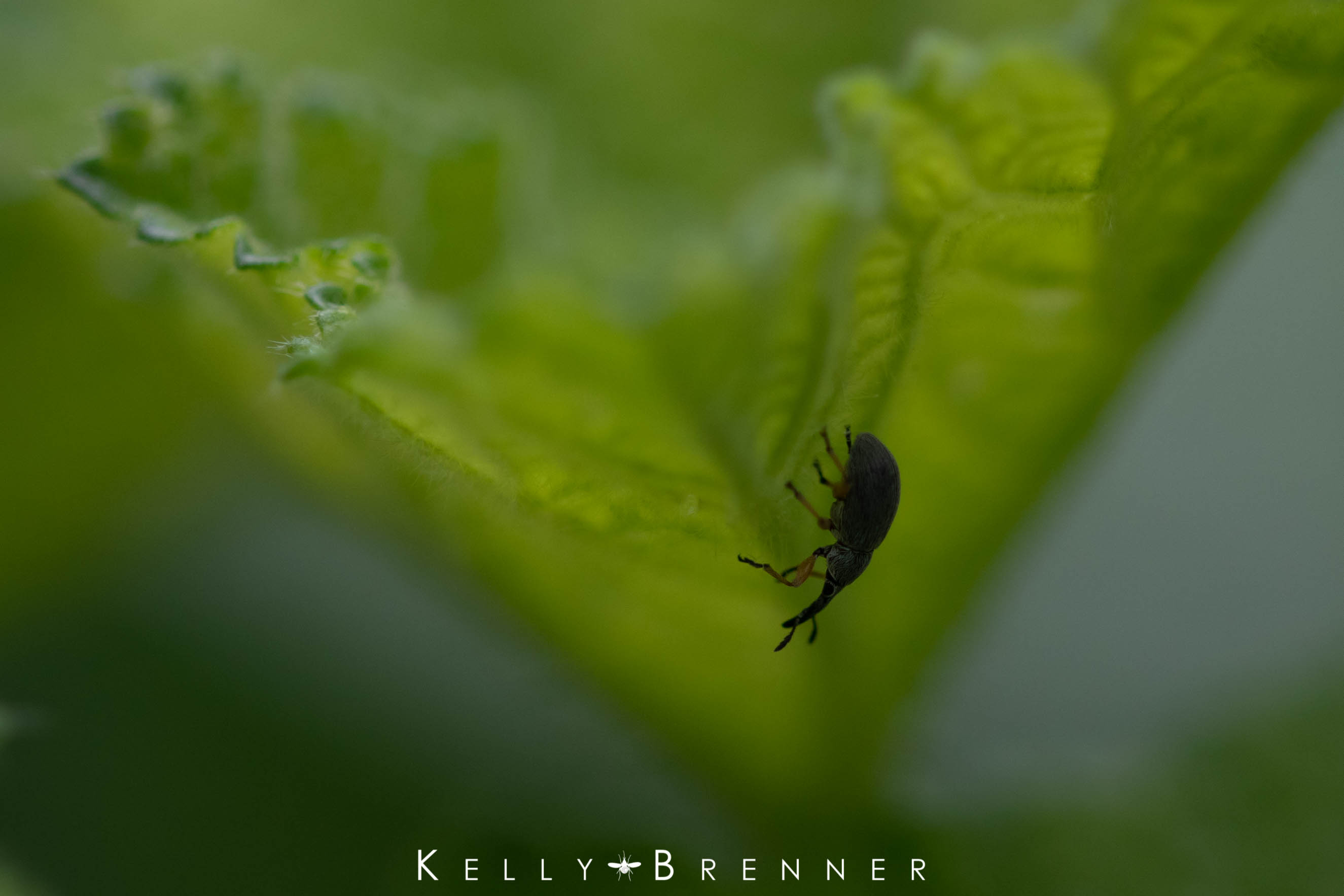 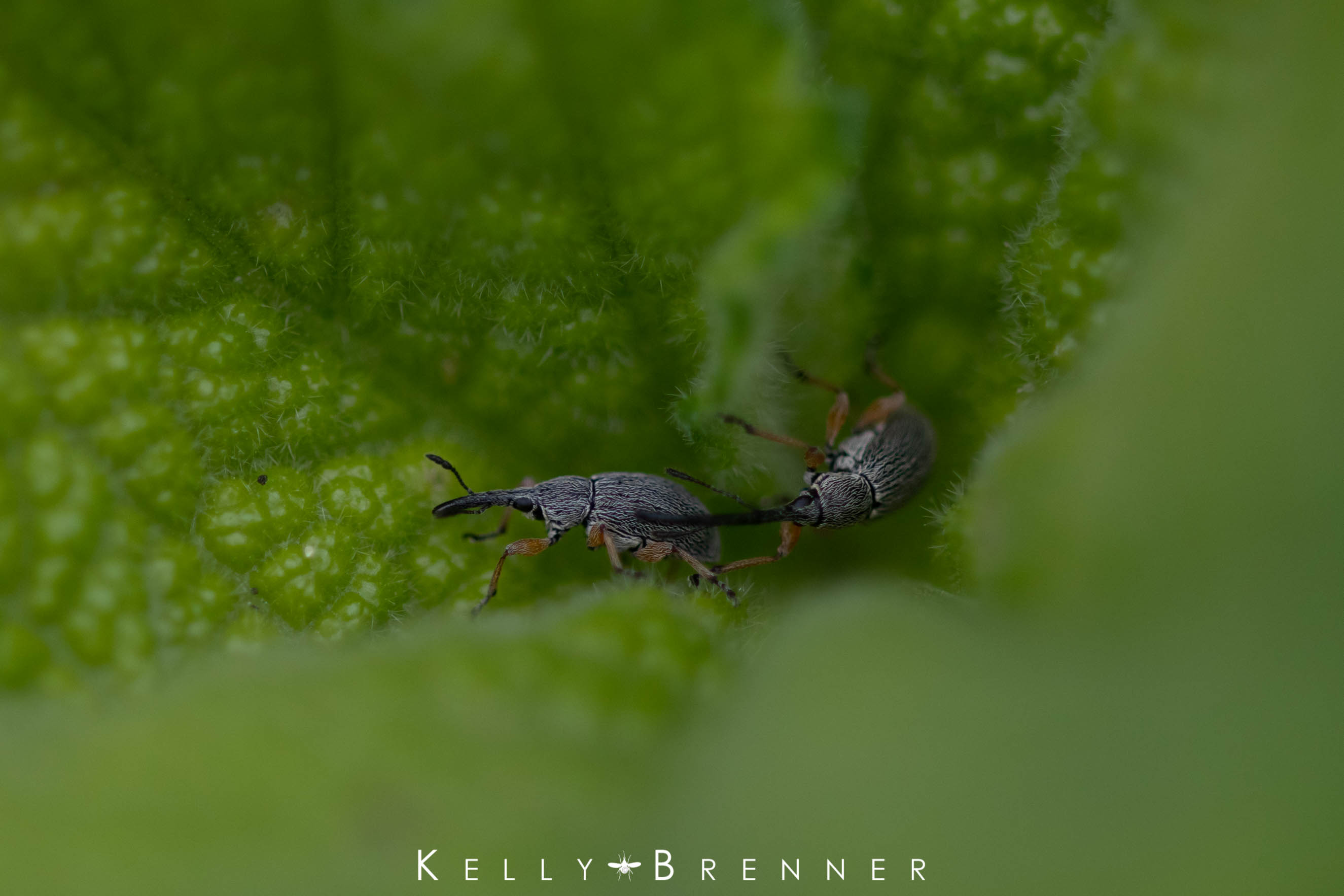 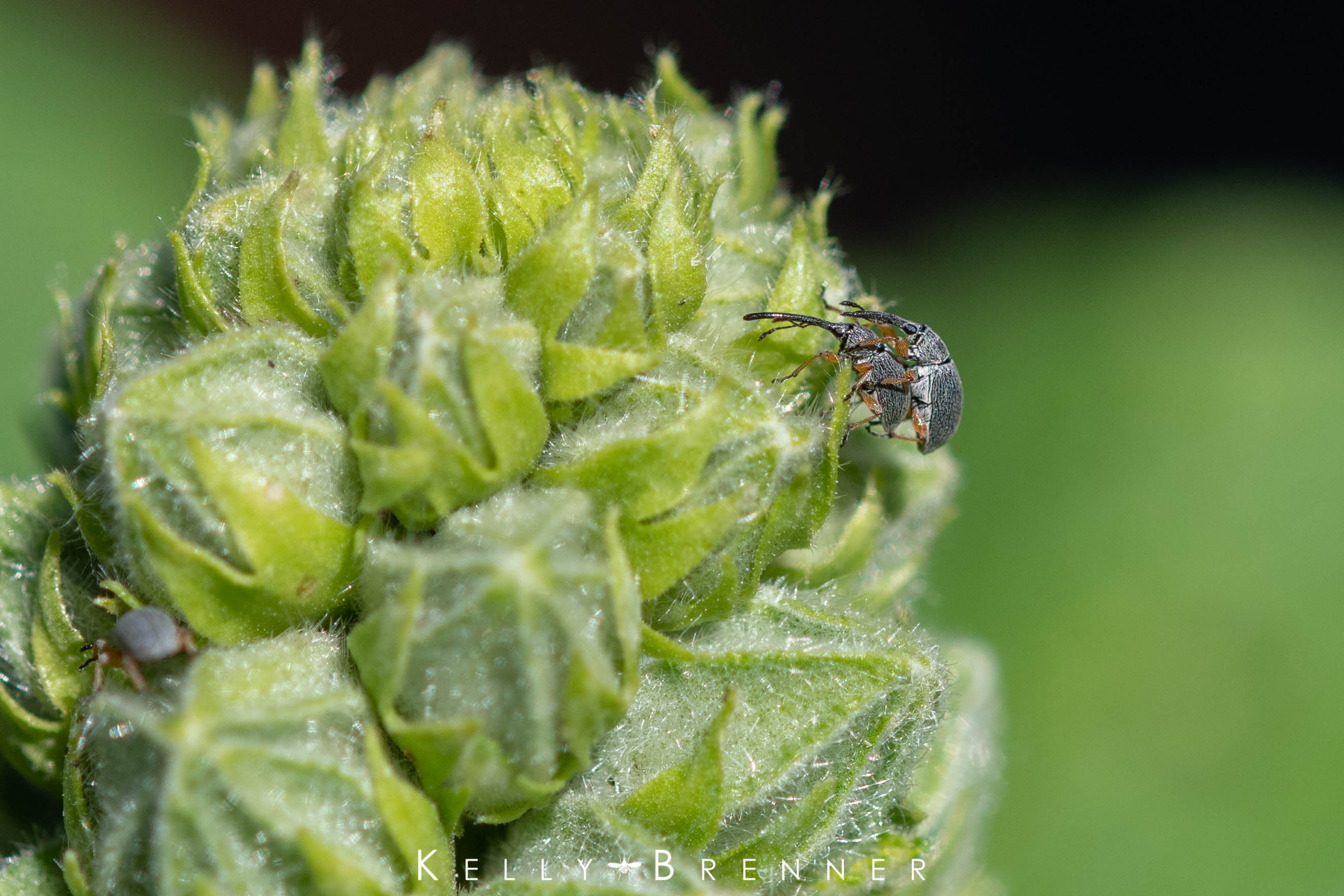 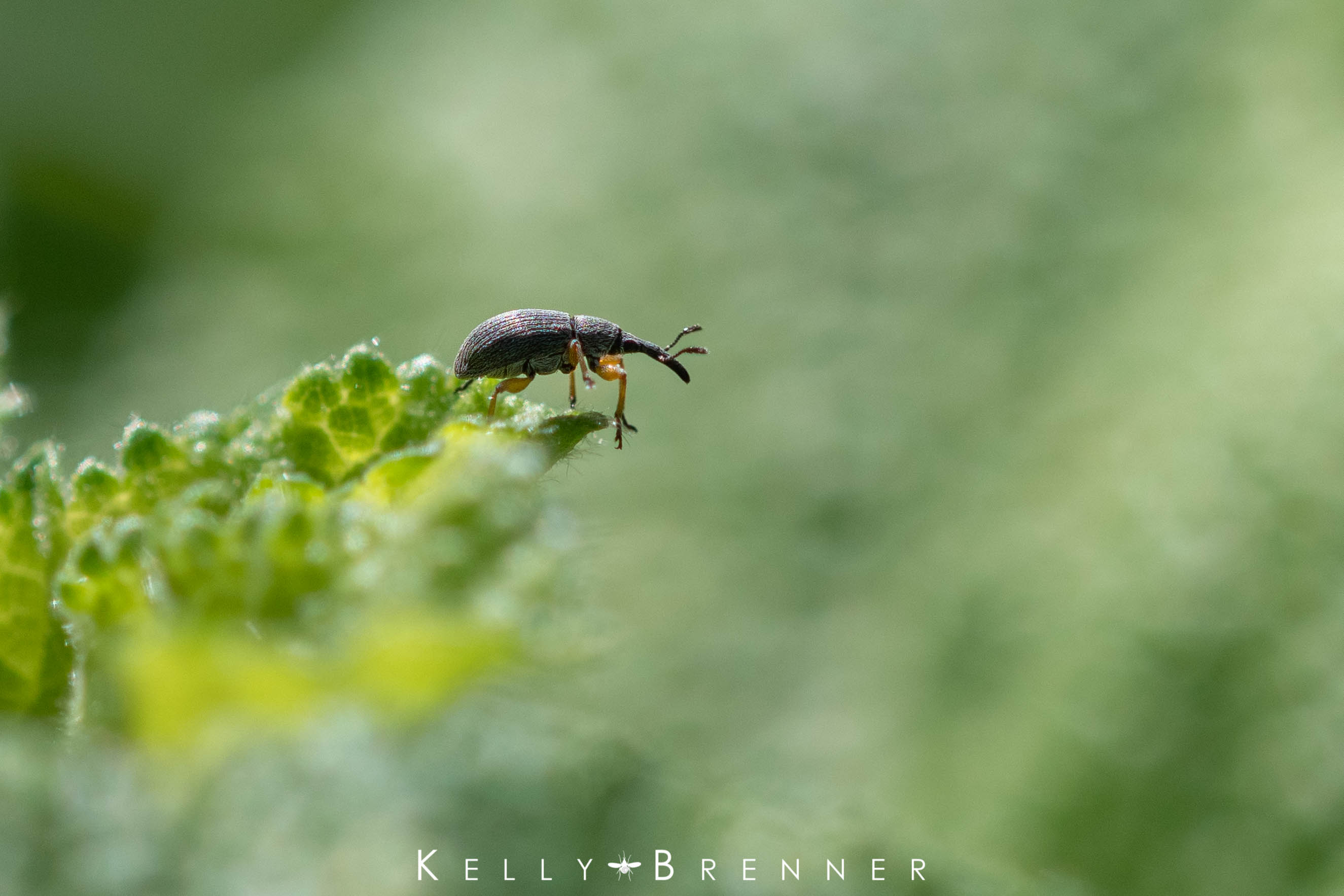 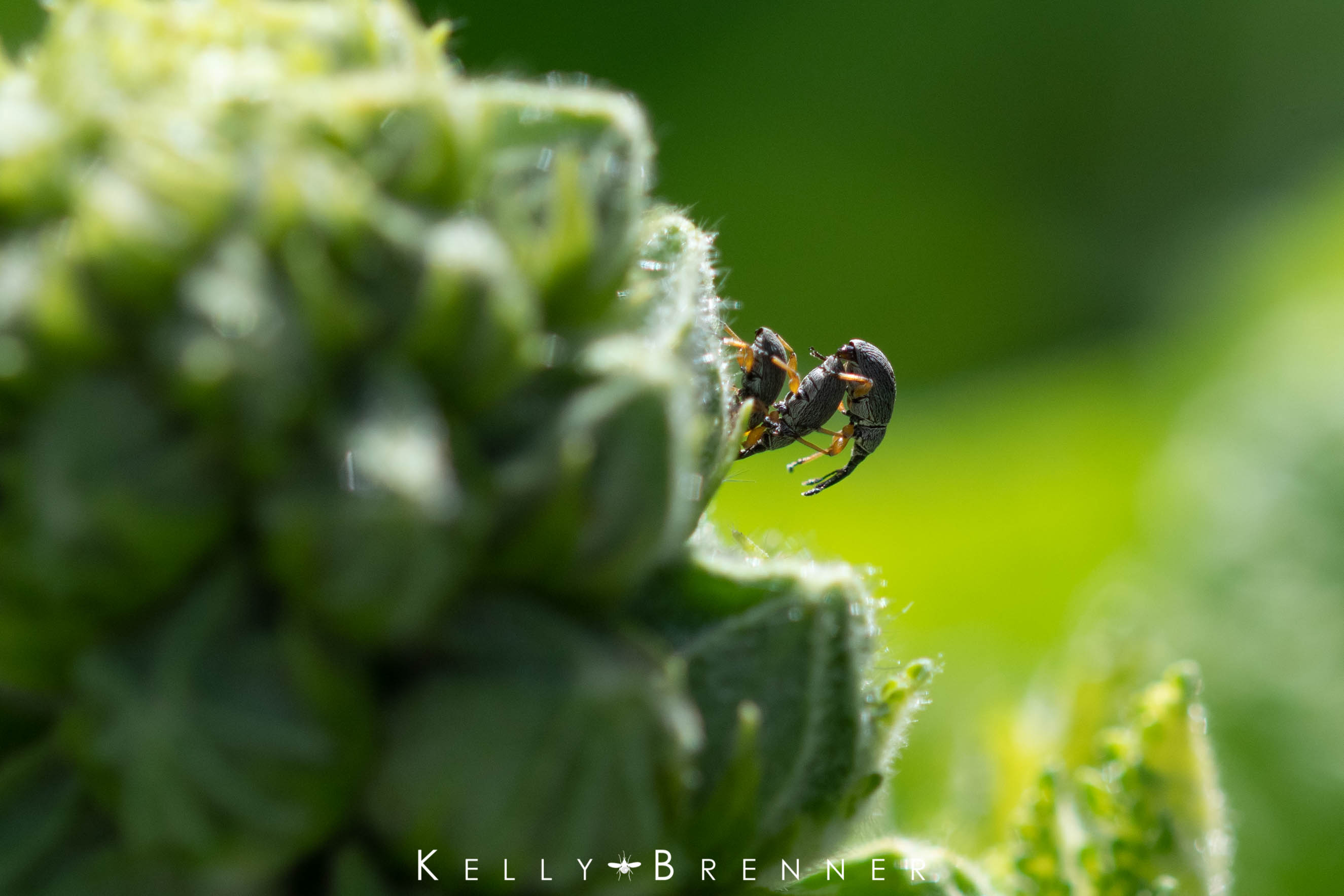 Diary of an Urban Wild Garden: See No Weevil

It all started back in April when I found a teeny weevil on a window ledge in the living room. The weevil had ceased to be, but where had it come from? I posted it on Twitter and quickly learned it was a Hollyhock Weevil (Rhopalapion longirostre), which made sense because there are hollyhocks planted right outside the window I found it in. The flowers had been there a few years, sown as part of a fairy garden flower mix, but they didn’t appear to have much wildlife value so their days would be limited once I got around to adding new native plants to that area.

But now I was interested in these flowers I had mostly ignored. The hollyhocks were barely beginning to sprout out of the ground, but over the next few weeks I kept an eye on them as they grew up. And then, just a month later I began to regularly find weevils on the plants. It’s no wonder I had overlooked them before, they are tiny, roughly 4mm in length. And they are, to the bare eye, a nondescript gray color, easily missed among the dark green leaves of the hollyhock.

When seen up close though, they are much more interesting. These tiny gray weevils have contrasting, bright orange legs and their bodies have light grey hairs over their shells. Like most weevils, they have long snouts, the male’s is about half the length of his body. But the female’s snout is truly impressive – it’s easily as long as her body.

Both the male and female weevil use their long snouts to consume parts of the hollyhock including the flower bud, leaves and seeds. But the female’s snout is long for a reason, she uses it for reproduction. At the end of the snout, or proboscis, is her mouth that she uses to chew a hole in the developing flower buds, all the way down to the ovary, where she lays her eggs.

The adult weevils don’t just eat and lay eggs on the flower buds, they also mate on them. Promiscuously. I watched them over weeks, constantly mating on the flower buds. My research showed that they typically mate in July and August, but these were most certainly mating already in May.

Hollyhock Weevils are not native to Seattle or even to North America. They are from southern Europe and parts of Asia, but have spread throughout much of the world with hollyhocks. They have been in Washington state since at least 1966. I found no mention of them as a pest on anything other than hollyhocks, and even on these they do little damage. But they are enormous fun to watch. 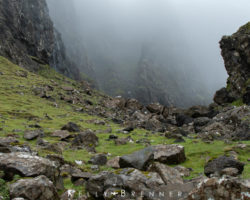 Poem of the Week: Mider's Song

This is a poem by Fiona Macleod, a pseudonym for William Sharp who included this poem in his play, The Immortal Hour. How beautiful they are,The lordly onesWho dwell in the hills,In the hollow hills.They have faces like flowersAnd their breath 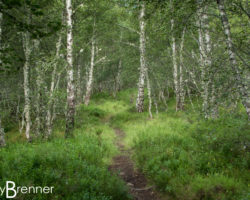 Poem of the Week: Sonnet - To Science

By Edgar Allan Poe Science! true daughter of Old Time thou art!    Who alterest all things with thy peering eyes. Why preyest thou thus upon the poet’s heart,    Vulture, whose wings are dull realities? How should he love thee? or how deem thee wise,    Who