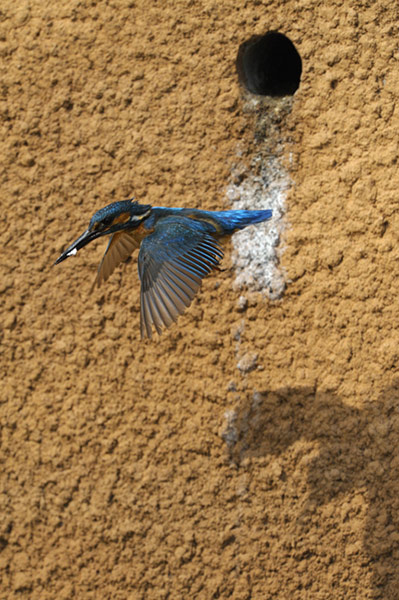 Kingfisher in Cambridgeshire via:: Guardian

This was mentioned in a recent Foragings post, but it has such great design implications that I wanted to feature it in more detail.

Over several years a landowner has turned previous agriculture land into a wetland habitat. Natural England helped with this transformation through their Higher Level Stewardship program which “aims to deliver significant environmental benefits in high priority situations and areas”. The program offers advice and and support to landowner’s for “more complex environmental management”. The most recent work at the site was the building of a wall sited to offer nesting for different bird species including the kingfisher and sand martin. Both of these bird species have Amber status from the RSPB which is the mid-level status for conservation. There are nearly 200 holes in the wall designed for the sand martin while two are designed specifically for the kingfisher and are the first in the country to be so.

While the sand martins aren’t expected until 2011, a kingfisher has already moved in and successfully reared a brood of six chicks. Dr. Nigel Russell from Natural England states the significance of this event: “This first brood of kingfishers is great news for a site that was reverted to wetland just four years ago. The presence of breeding kingfishers is recognised as an indicator of high quality wetland habitat.”

The property owner gave his thoughts on the kingfishers, “It is a privilege and thrill to host such iconic birds so soon after completion of the nesting colony. They appeared as if by magic within weeks – unmistakeable in their orange and shimmering blue plumage.”

View a full slideshow if images from the nest on the Guardian’s website: Kingfisher hatchlings prove success of Cambridgeshire’s ‘bird hotel’

While this is not an urban site, this project could potentially be replicated in urban settings such as along rivers or other urban wetland and riparian sites. Many towns and cities have rivers or creeks running through them as do many individual neighborhoods. While the species attracted may vary depending on the location, the idea of providing these nesting walls offers a valuable habitat design tool. Many cities have channeled the rivers that run through them and as more cities attempt river restoration projects, this idea may be an option. Where there is already existing infrastructure such as bridges or retaining walls, nest holes could potentially be incorporated into the existing structures or added onto them. Coupled with the idea of floating islands (which was covered here, Floating Habitat Islands), cities could use these tools as an option for restoration that offers options to do so without dramatic structural changes. This could be a short term solution until a major restoration project was implemented, or in situations where it’s not feasible or economically viable  for a full restoration.

A similar idea, featuring nest boxes along a water way, was featured here with an interview with the designer: Animal Wall in Cardiff Bay.