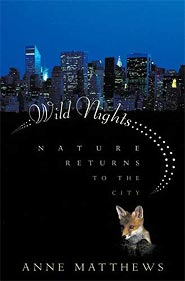 , by Anne Matthews is one of those books that I both liked and disliked. It’s full of excellent observations of city wildlife, but there are no footnotes, no bibliography and no references. Without those, it’s less of a scientific or fact-driven book and more essay, which would be fine except there are many facts in the book.

The book focuses almost exclusively on New York City, with some comparisons to other cities mentioned. There’s an interesting history of the five boroughs and a good description of the current lay of the land. The first chapter contains an interesting narrative of the author following a conservation biologist making early morning rounds in the financial district to find birds killed or trapped by the skyscrapers. It’s a fascinating insight into the unseen world where bird migration clashes with the city. The biologist describes some of the birds she’s found which include species that are very definitely not city birds such as a yellowthroat, red-bellied woodpecker, orchard oriole, woodcock and a virginia rail. For more about the impact of city lights on wildlife see City Lights and Urban Wildlife.

In the next chapter is another interesting narrative where the author follows a wildlife biologist who climbs out on the ledge of a building to band some Peregrine Falcon chicks wearing a padded suit and helmet to protect against the parents. The author also discusses other resident peregrines in the city and how many people react to them. Some peregrine nest sites are disturbed by people, but many protect the birds such as building owners who do their best to protect the birds’ privacy, or bridge workers who rescue fallen chicks. For more about the Peregrine Falcon see Urban Species Profile:: Peregrine Falcon.

The third chapter discusses the human-wildlife conflicts of the city such as the Canada geese who have found New York City a good year-round location and have given up migrating. Bears, coyotes and most commonly deer, all pose problems for cities and particularly roads. There’s also a good discussion about the history of New York waterways, their downfall into polluted, lifeless rivers and the subsequent cleanup and reintroduction of aquatic species. Unfortunately the third chapter, highlighting the conflicts with wildlife, the undesirable species such as rats and disease and plague is significantly longer than the, more positive, first two chapters. The doom and gloom continues in the fourth chapter which discusses invasive and exotic species, both wildlife and plant. The book then discusses the great variety of pets in the city although I’m not sure how that fits in.

The following chapter delves into island ecology and highlights Santa Cruz and then continues on to the subject of the ecological history of New York City compared to today. A detailed history of New York city from glaciers to the Dutch, Civil War, stock market crash and how it all changed the landscape of the city is the focal point of this chapter.

The third section of the book features plants more than wildlife, but still has some interesting narratives such as the history of the old Penn Station that was essentially lost, and the effort to recover the pieces of it from collections, landfills and marshland. Also featured is the Urban Park Service and their Project X, which was an initiative to reintroduce one plant and one wildlife species per year to each of the NY boroughs. I’m not certain this program is still going because I couldn’t find anything about it online. The following chapter discusses ancient civilizations and their downfalls such as Rome and how environmental destruction may have played a role.

The next to last chapter has a fascinating discussion about public space in the city and particularly the public space created by incentive zoning. In the 60’s the city offered building developers more building space on the top of the building if they provided a public space on the ground level. Many did, but over time, most spaces have been hidden, filled with dumpsters, blocked off or deemed private. The author follows a Harvard professor as he visits some of these public spaces in a quest to see them all. He is chased out, threatened and yelled at by security, building owners and residents. It’s an interesting look at institutional memory and the idea of public space. The final chapter speculates on the future of cities, ecology and natural disasters.

All in all, this book has some gems such as the topics highlighted in the first two chapters, but it’s a shame that resources, bibliography and other references don’t exist in the book. It’s a good essay, although it’s already outdated in many aspects. Another thing I didn’t like is that there’s a significant amount of the doom and gloom in this book and while some facts are necessary, it’s a fine line between stating them and dragging them out. I subscribe to the David Attenborough theory of nature and conservation, that a ‘love’ message about the wonders of flora and fauna is more effective than the doom and gloom take. There is also a lot missing from this book in regards to urban wildlife such as green roofs that would have been a great addition. While I liked many of the narratives in the book, I was disappointed by the lack of resources.

For more on this subject, read the very good New York Magazine article, The Concrete Jungle.

Running now through May 15th of 2011 is Presidio Habitats in San Francisco. It is a joint venture between FOR-SITE Foundation and Presidio Trust and started running May 16th of this year. The

Wildlife in the City Program

A joint program between Nottinghamshire Wildlife Trust and Nottingham City Council called Wildlife in the City, is aimed at connecting residents to the nature and green spaces in their community. The program aims to provide