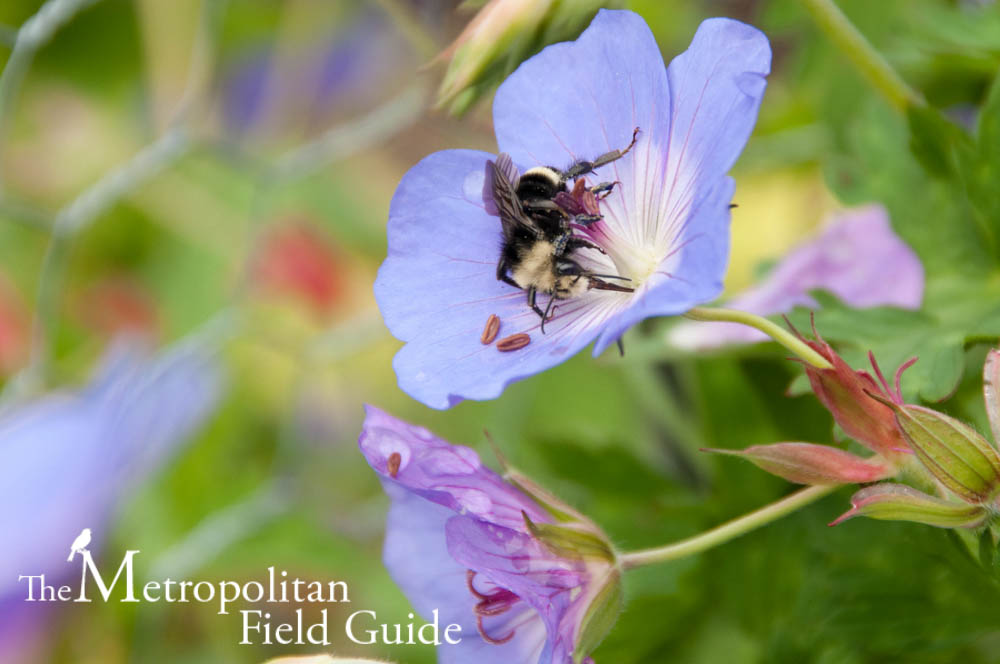 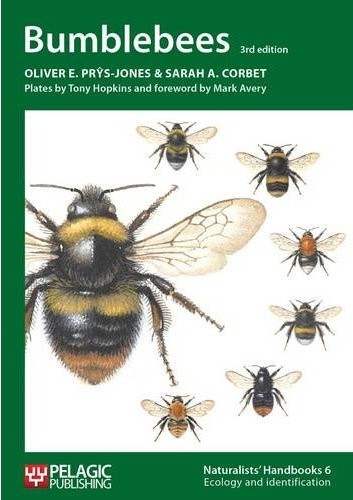 The newly released 3rd edition of Bumblebees, number 6 of the Naturalists’ Handbooks series for ecology and identification by Pelagic Publishing, is a phenomenal resource. Focused on British bumblebees, this book is full of information about all aspects of the ecology of bumblebees which makes it a valuable resource for readers in any location. It’s a book which is not overburdened with too much scientific data (although much is referenced), but still packs in a great deal of information, this book is very useful. I recently researched bumblebees for an Urban Species Profile and I wish I’d had this book then because it contains all of the information I had to gather from many different resources.

The book begins with a description of how to recognize bumblebees and discusses the difference between bumblebees and cuckoo bumblebees, which is valuable to know when observing a nest because the cuckoo bumblebees often take over colonies. Following is a detailed chapter on the natural history of bumblebees and although it focuses on British bees, it’s full of interesting information about the difference in behavior among bumblebees. The chapter also details the annual cycle of colonies, which is the same among most temperate climates, including most of the US. The entire life cycle is explained over the next few pages with a great deal of interesting information. For example you can tell an overwintered queen from a new, or virgin queen because the overwintered queen will have more ragged wingstips and the hairs on her wings will be worn away.

One of the most relevant topics in the book for designers focuses on bumblebee nests. Discussed is how the bees choose a location, the placement of the nest and the variety of man-made items where nests have been found such as a discarded armchair, old lawnmower and even rolled-up carpet. There’s also information for scientists looking to collect a nest and how to establish it in captivity for study. There are tips on how to make land, including agricultural fields, more friendly for bumblebees such as a continual bloom season, keeping hedgerows and not using herbicides. Also importantly included are directions on how to build a nest-box and manage it.

The chapter on cuckoo bumblebees and other parasites is fascinating. Cuckoo bumblebees don’t contribute to the colony, they don’t carry pollen or create wax or even produce workers. The female moves into an established bumblebee nest and often kills the queen, taking over the colony where the workers care for the cuckoo bumblebee’s young. Other nest invaders of British bumblebees include the larvae of the wax moth, mites and species of Diptera, some of which are parasitic, some are harmless and some are convincing bumblebee mimics.

Foraging is another topic of increased interest to anyone creating habitat for these pollinators. The chapter discusses the interesting concept of the economics of foraging and the balance of work and reward. It also discusses how bumblebees find food sources because unlike honeybees, they don’t communicate the location of nectar to one another. It also touches on the variety of tongue lengths between species which influences the types of flowers they visit. There is a great deal of information about how they forage on flowers, for example on vertical spike flowers they forage from the bottom to top. Additionally the chapter highlights the relationship between flowers and bees and how they communicate and interact. Even more detail is provided about the techniques in which bumblebees collect pollen and/or nectar and which plant families are the most important.

The following chapter discusses the threats to bumblebees and the best methods for conservation. There is also a brief plant list and an interesting chart highlighting the factors promoting bumblebee survival such as perennial flowers, managed roadsides, floral succession and more. Further discussed is how to involve the public, pollination webs and finally the commercial use of bumblebees.

The chapter on identification is extremely valuable to British readers, but surprisingly useful to everyone else as well, because it includes methods to distinguish the difference between hoverflies, other bees, bumblebees and cuckoo bumblebees, illustrated with drawings. Also illustrated are differences between female (worker and queen) and male bumblebees. Additionally there is a key for British bumblees and beautifully illustrated, color plates.

The final chapter includes information and methods for scientists on how to study bumblebees and throughout the book are ideas on what aspects need further study. There is also an enormous list of resources, both published and web-based.

Overall, this is a great book. For backyard gardeners who are really interested in learning more about bumblebees this is a good resource along with Attracting Native Pollinators: The Xerces Society Guide to Conserving North American Bees and Butterflies and Their Habitat

Unfortunately there aren’t any options in the US to purchase this book, but there are plenty from the UK: directly from Pelagic Publishing, Amazon.uk or from NHBS.

There are a number of other interesting books in the Naturalists’ Handbook series including Hoverflies, Plant Galls, Dragonflies and Solitary wasps among others. If Bumblebees is any indication, they should be excellent resources.

Thank you to Pelagic Publishing for providing me a copy to review.

Everyone knows it rains a lot in Seattle and with the Puget Sound on our doorstep, stormwater runoff can have a huge impact on the aquatic ecosystem. In the Puget Sound there are octopus, sharks, harbor seals, sea anemones, sea 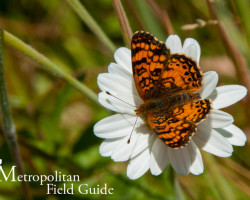