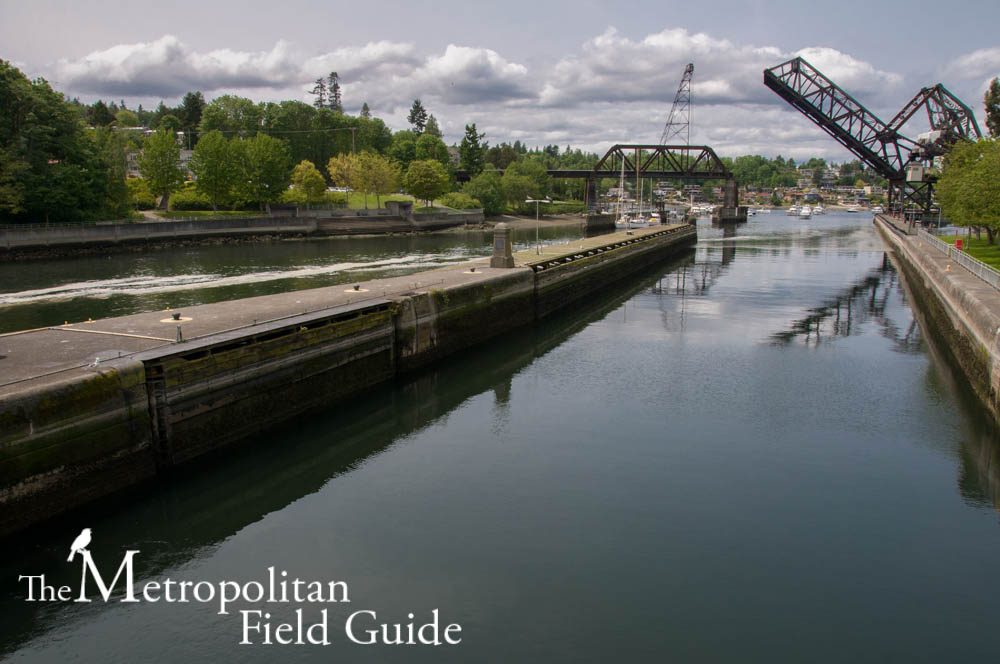 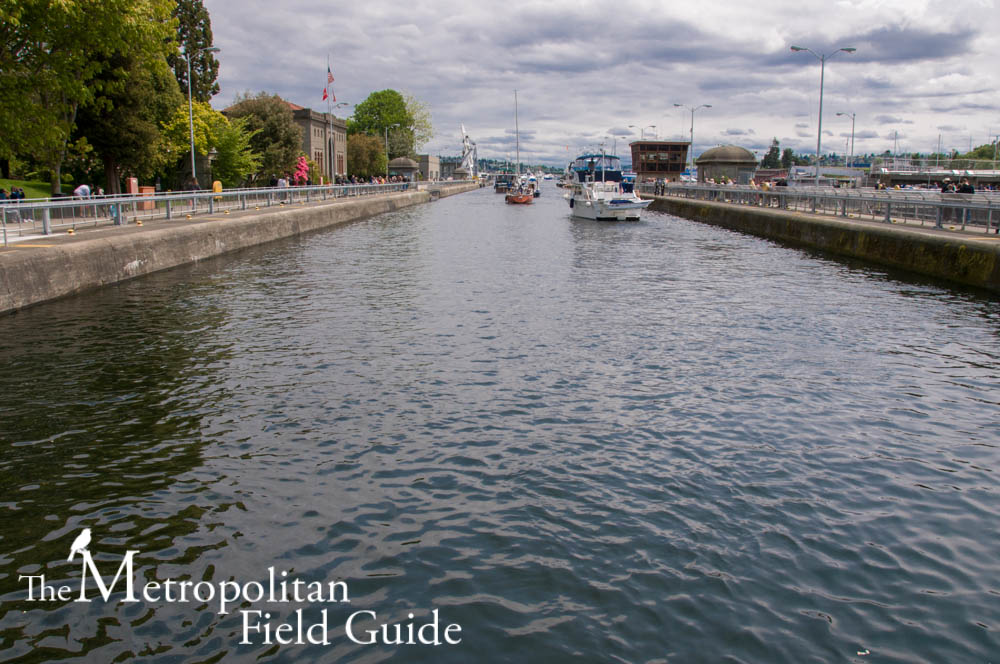 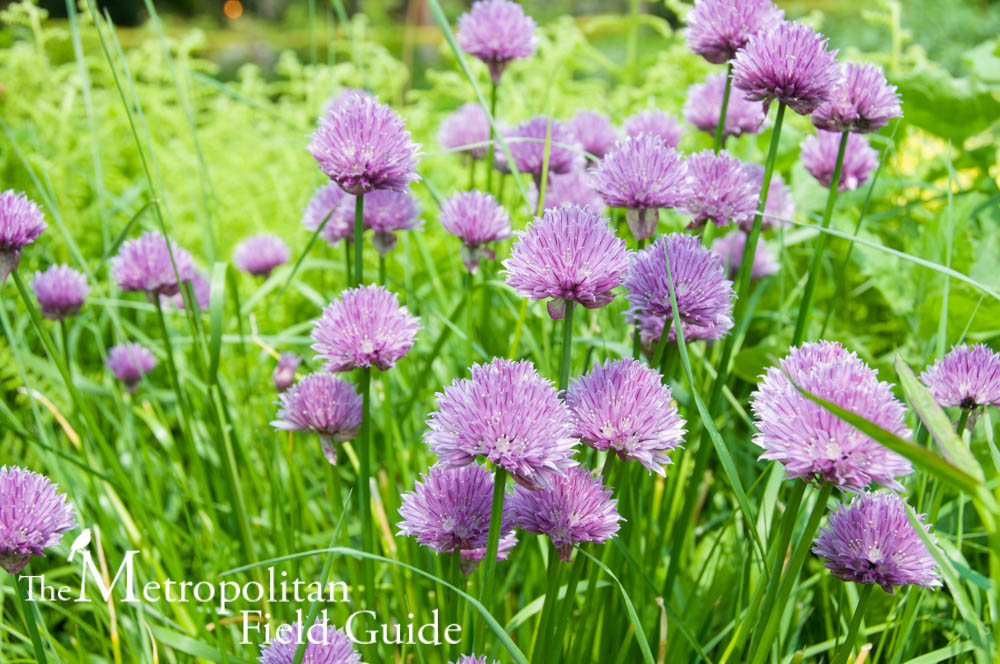 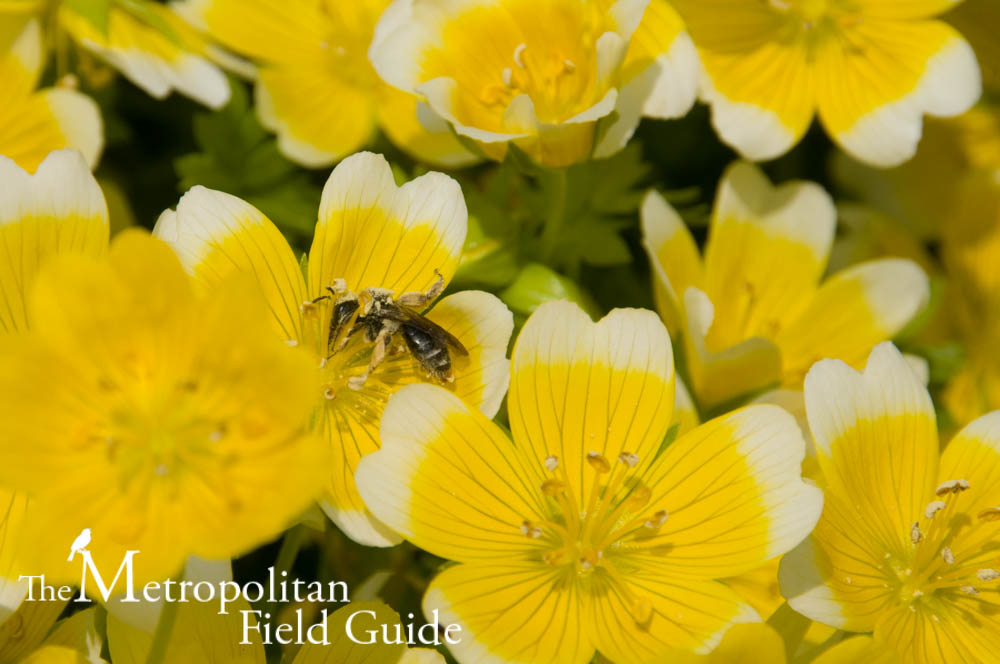 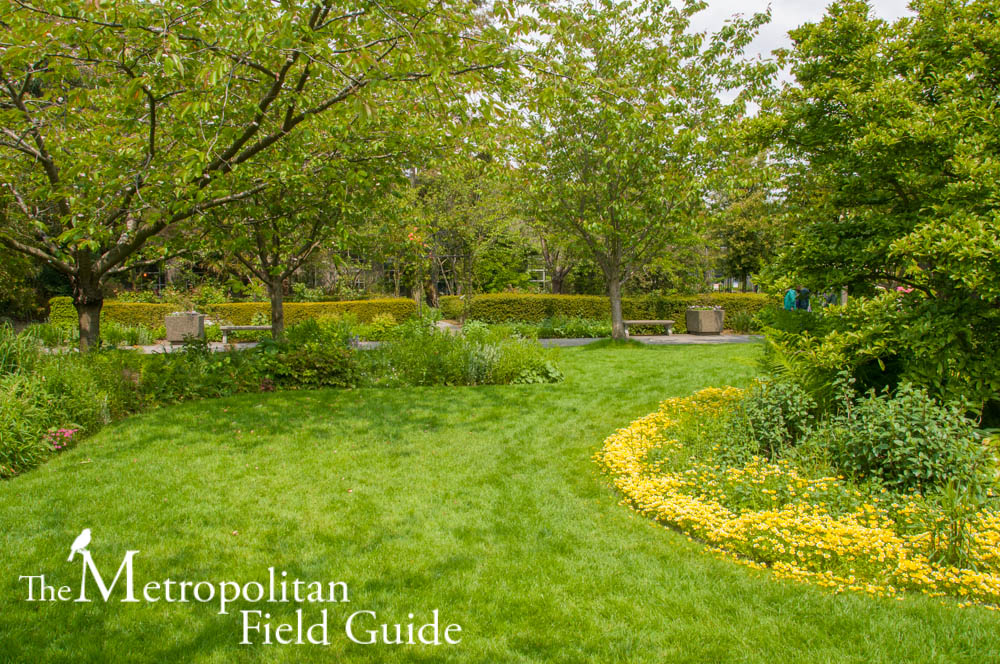 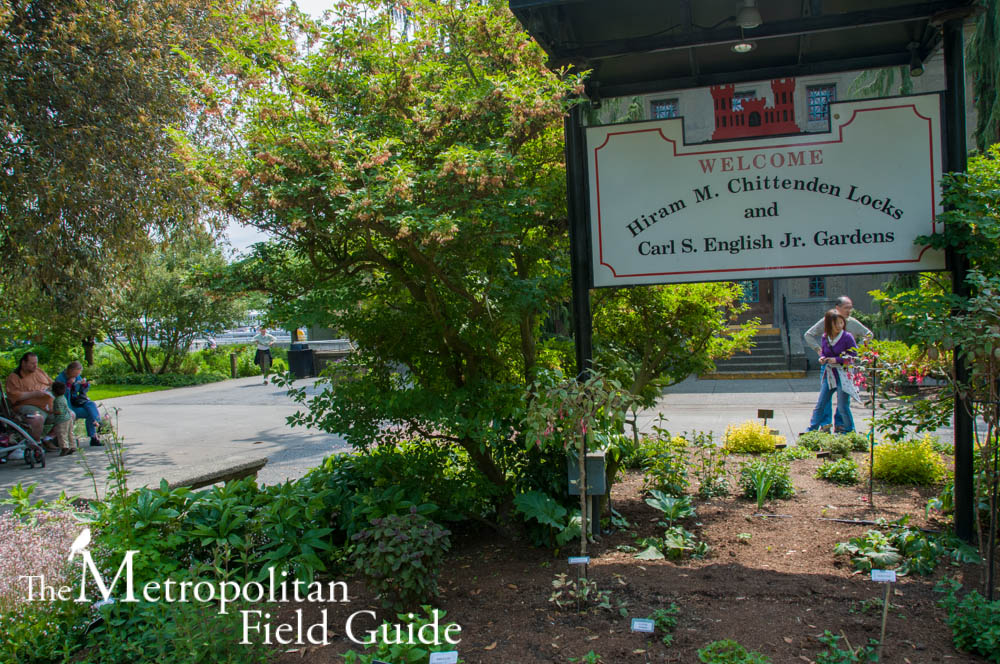 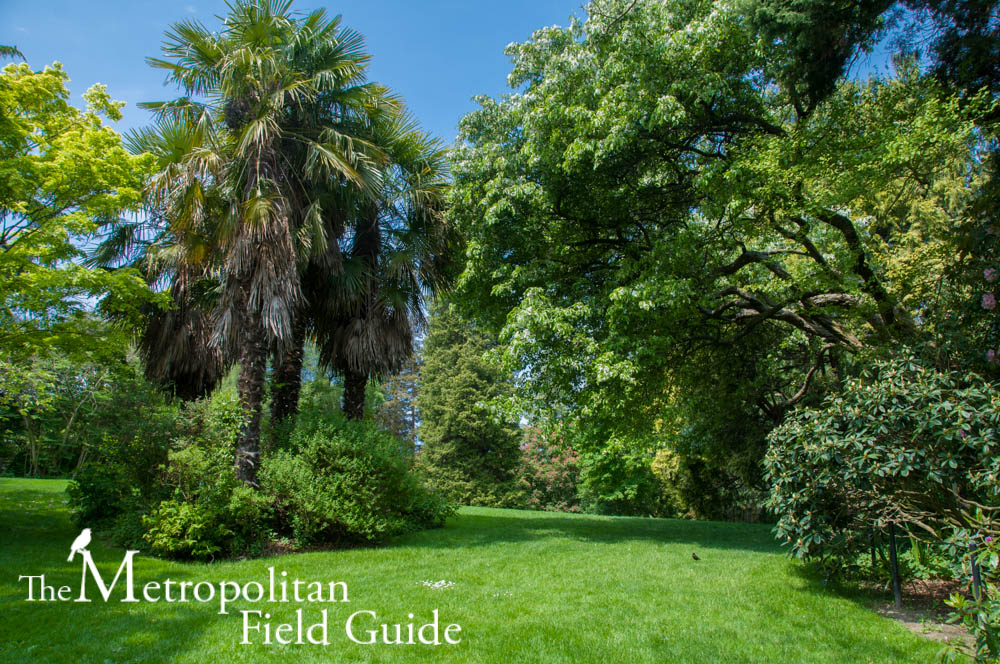 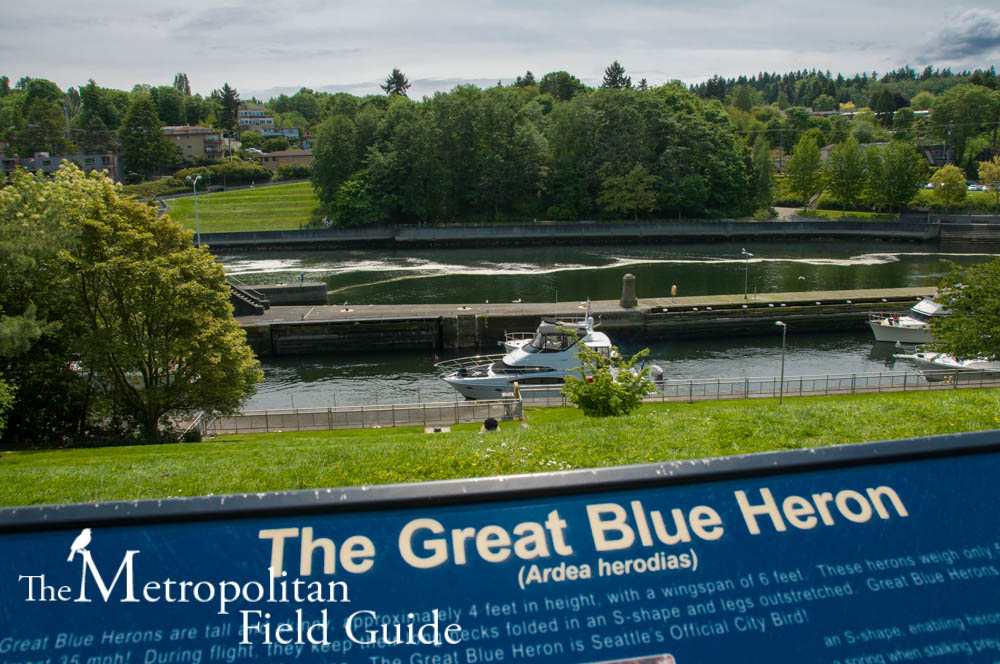 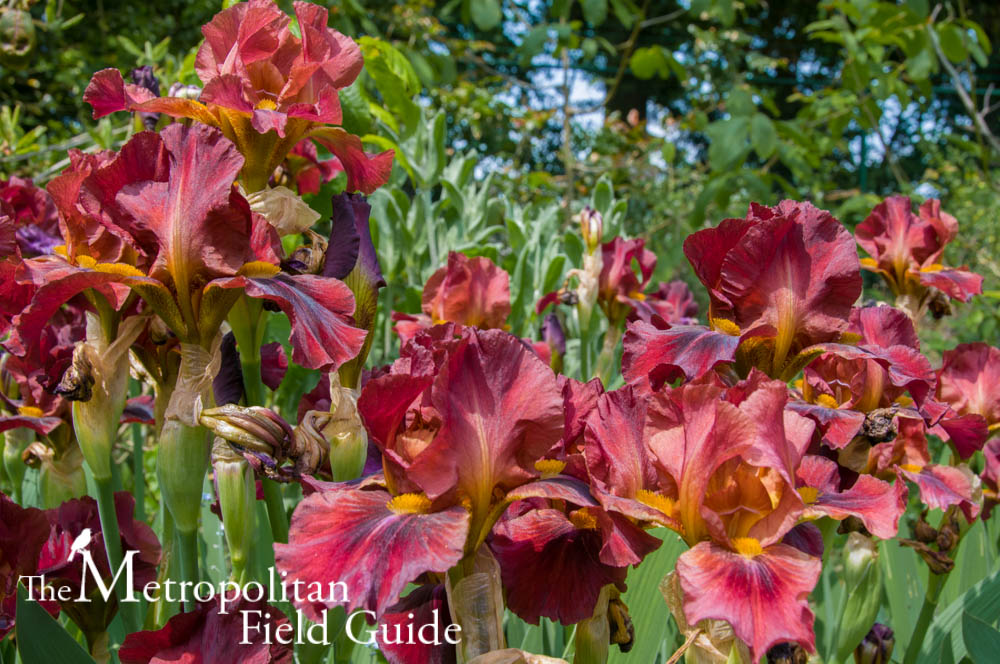 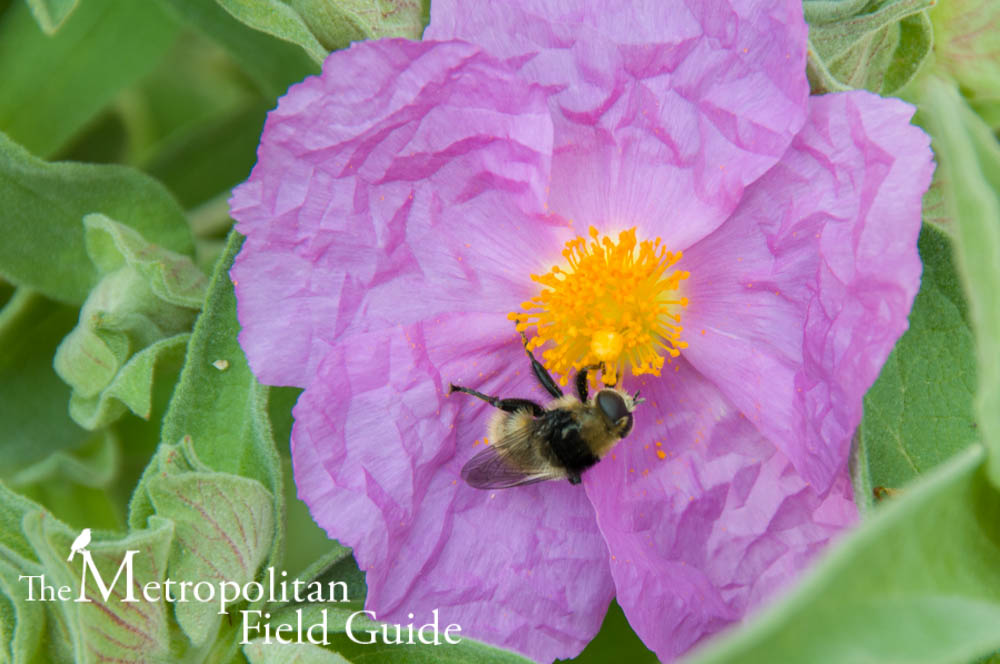 The Hiram M. Chittenden Locks in Seattle, have been moving boats and other vessels from the Puget Sound to Lake Washington and beyond since 1917.  The Army Corps of Engineers built and maintains the locks, garden, grounds and buildings. To the east of the locks is Salmon Bay, a freshwater bay connecting to the rest of the freshwater bodies including Lake Union and Lake Washington. To the west is Shilshole Bay, a saltwater bay which connects to the Puget Sound. Before the construction of the locks however, the waterway from Lake Union was only a small creek and Lake Union and Lake Washington were not connected either. Two cuts were created, the Fremont cut and the Montlake cut to connect it all together. Lake Washington was then lowered to the same level as Lake Union, about 9 feet. This changed the landscape which was discussed in the previous post: Marsh Madness:: Marsh & Foster Islands and ‘the Fill’.

There are two locks, a smaller and larger one used depending upon the current traffic need. The locks move ships, from kayaks to barges up and down 26 feet, the largest taking only 10-15 minutes. Every year over a million tons of cargo move through the locks. It was historically built to aid in the transportation of goods although today, there are by far more ‘pleasure’ boats than commercial vessels.

The meeting of salt and fresh water makes the locks rather complicated and requires several preventative measures to keep the salt water out of the fresh water lakes. This also makes the locks a unique underwater ecosystem where many species which would not otherwise ever meet, mingle together. Aquatic life in the locks, including wolf eels, sea urchins, trout and lamprey all have been found there. The most well-known of the aquatic life however, is of course the migrating salmon.

On the other side of the locks is a fish ladder and smolt flumes, or slides. The original fish ladder was constructed in 1916 but replaced in 1976 once knowledge of fish ladders had improved, to add more steps as well as a viewing gallery. This ladder is unique because it’s one of the few where fresh water meets salt water. The smolt flumes were added to aid in the difficulty the salmon were facing in passing through the locks and now they act like a waterfall away from the locks. Some of the young fish simply fall out with the water flow while others shoot out above the stream, wildly flapping in the air before plunging into the water below. This outmigration of smolt is the largest of it’s kind in the lower forty-eight with up to four million smolt. These modern changes have been successful and it’s been estimated that 80% of adult salmon use the fish ladder over the locks, while 90% of the smolt use the flumes.

The Carl S. English Jr. Botanical Garden is the result of a gardener hired in 1931 to transform a graveled area of the grounds, to an English estate style garden. An expert horticulturist and botanist, Carl S. English Jr. traveled and corresponded with botanists around the world, and with the aid of the captains of ships passing through the locks, amassed a significant collection of plants. One of the most impressive acquisitions was the dawn redwood, which he was among the first to receive seeds in the United States. Currently eight are still growing throughout the garden. The  seven acre garden boasts 573 species of plants, many exotic from locations including Thailand, China, Japan, South America and New Zealand and many grown from seeds. However, Carl also appreciated the plants native to the West Coast and included many native conifers in the garden. Among the plants found in the garden include Mexican pine (Pinus patula) from Mexico, Darwin barberry (Berberis darwinii) from Argentina and Chile, Indian horse chestnut (Aesculus indica) from the Himalayas and the California wax myrtle (Myrica californica) from the west coast of the United States.

The gardens are also full of many flowering beds which in turn are full of a variety of insects. During my visit I watched many bumble bees, mason bees, mimic flies and species of flies and bees among the variety of flowers. I found a couple different species of lady beetles among the border beds as well and one plant I saw had leaves full of galls. The gardens were also alive with bird songs and there are many bird houses throughout the garden. A small pond sat hidden among a group of trees and stumps were placed throughout the garden. The garden is a nice example of a traditional style English garden with added habitat value.

The locks and garden are also along the Salmon Bay Wildlife Corridor (PDF) which runs from Discovery Park in Magnolia to Golden Gardens Park in Ballard. Across the water from the locks in Magnolia is Commodore Park,  the edge of the Kiwanis Ravine, an established Great Blue Heron colony which on average years produces 100 herons. Some of these nests can be easily seen from the overlook in the garden.

News Course Changes Rough on Residents:: An interesting article about the attempt of a golf course to provide habitat and the challenges faced from the neighbors. Photo From the Field:: A blog post documenting the installation of a nestbox for Peregrine Falcons on 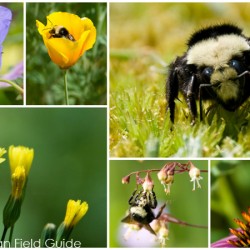 In the Pacific Northwest there are over a dozen different species of bumble bees and close to 50 in North America. There are over 250 species world-wide but the majority of them live in the more temperate climates of the