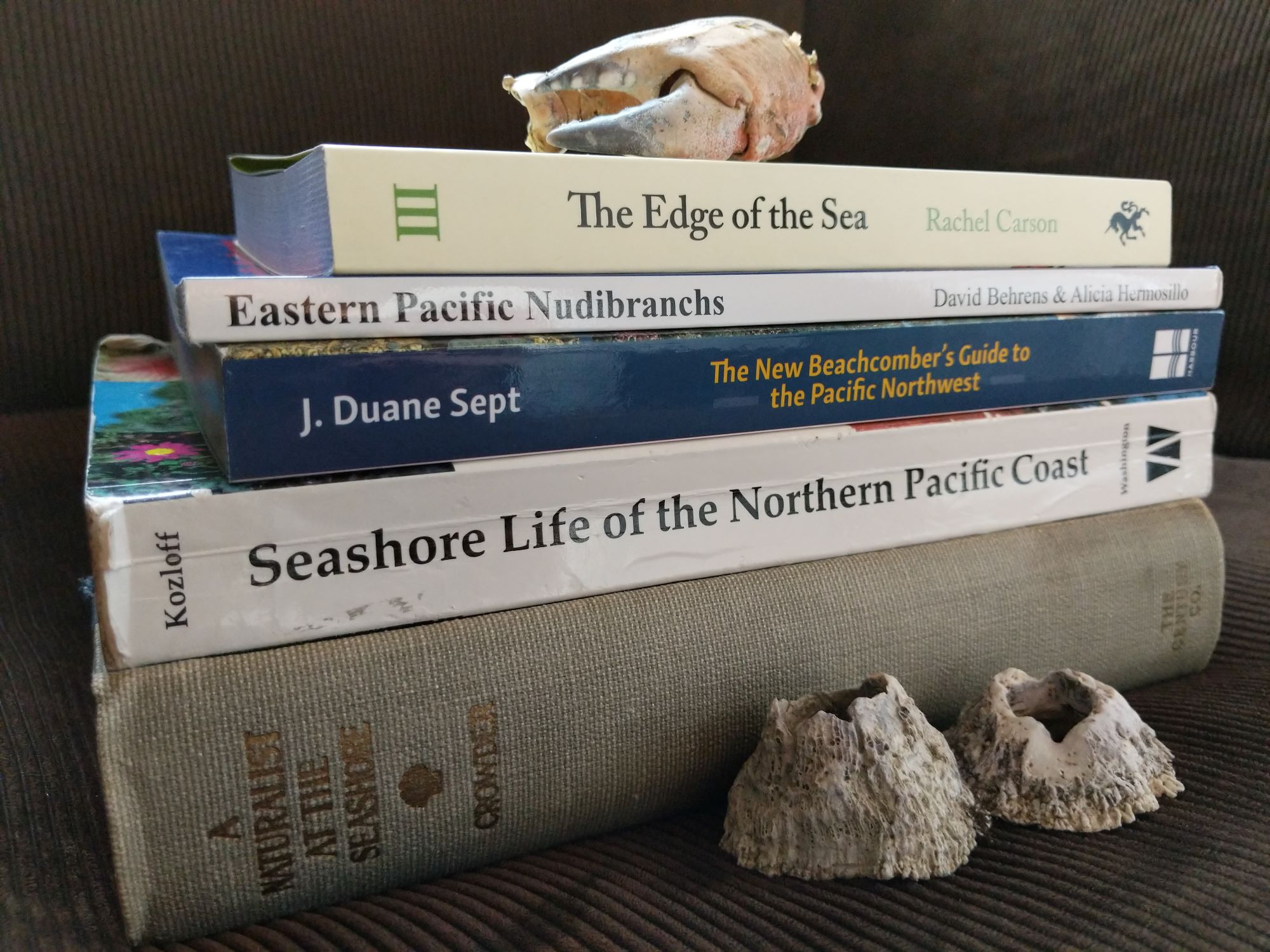 It’s no secret that I spend a lot of time at the beach looking for and photographing marine invertebrates. Many, if not most, of my encounters lead to countless questions about what I’ve found. What does that anemone eat? Why are the sand dollars on end and not flat? Why does that crab have seaweed attached to it? Why is that shaggy mouse nudibranch white and not brown?

To find the answers to these questions, and to identify what I’ve seen, I always return home and quickly consult my books. Over the decade I’ve lived in Seattle and began visiting the tidal zone frequently, I’ve accumulated a small collection of regional books as well as others about one of my favorite habitats.

Recently, Elizabeth Mills, who you may remember from a past Artist Profile I wrote, posted a video featuring five of her favorite marine biology books and I was inspired to make a list of some of my favorite and most frequently consulted books as well.

The Edge of the Sea – Rachel Carson

Rachel Carson’s exploration of the seashore is one of the most delightful narratives I’ve read of this habitat. Not only are her observations astute, but I was very much taken by the scenes of a lone woman during the 1940’s and 50’s laying down on wet, seaweed strewn rocks to watch denizens of the tidal zone. This was something I connected with just as much as her vivid descriptions of life at the edge of the sea. Her prose is magnificent and at by the very first paragraph I was lost in her words.

The edge of the sea is a strange and beautiful place. All through the long history of Earth it has been an area of unrest where waves have broken heavily against the land, where the tides have pressed forward over the continents, receded, and then returned. For no two successive days is the shoreline precisely the same.

Rachel Carson’s home was in the Northeastern US and throughout this book she explores only the eastern seaboard, which is the only negative aspect of the book for me since I live on the west coast. Never-the-less there is a lot of interest in the book no matter what coast you live on in the world, or even if you live far away from any sea.

In the Rocky Shore chapter, she takes us into a cave to look at a hidden tide pool to describe the cave and all the inhabitants inside the pool. She doesn’t overlook anything, focusing her attention equally on the breadcrumb sponge and the mussels and barnacles, bringing them to life with detailed descriptions.

The source of this soft radiance is the sunlight that enters through the openings low on the floor of the pool, but only after its entrance into the pool does the light itself become transformed, invested with a living colour of purest, palest green that is borrowed from the covering of sponge on the floor of the cave.

Rachel Carson may be best remembered for A Silent Spring but for me, this is my favorite book she wrote, one that inspired me as a writer and a naturalist on the beach. You can’t help but feel the magic of the seashore in her words.

A Naturalist at the Seashore – William Crowder

This is, admittedly, a rather obscure book although I think it deserves much more attention. I first encountered William Crowder, a marine biologist, when I was researching slime molds for my book, Nature Obscura in an old National Geographic article he had written on them and I was smitten with his descriptions of the tiny wonders. When I learned he’d written a couple of books on the tidal zone I tracked them down.

Not only does William Crowder write prose that gives me writer envy, but he’s also a thoroughly observant naturalist and a spectacular artist. The book is scattered with color and monochromatic plates featuring all manner of unusual organisms from sea spiders to serpent stars.

Each chapter finds him investigating another organism, often beginning with a discovery of something found along the sea’s edge, continuing with questions and discoveries made in his seaside lab. I appreciate the depths he goes throughout the book to find the answers to questions about the life of the sea. I also appreciate his attention to the ‘lowly orders’ which are the vastly overlooked marine invertebrates.

…Nature is not less ingenious in the molding of a larva than in the modeling of a planet. Let the poets and the philosophers have the heavens for their sentimental transcendencies; I am content to thrill over the Riddle of Existence as I contemplate the orbit of a polar body within a single cell. For here, also, superlatives may abound. Here are the infinitely beautiful, the infinitely little, and the infinitely near.

Like The Edge of the Sea, this book focuses on the east coast, mostly the northeast of the US, but if you are “one in whom there dwells that desire to reveal at first hand, or even vicariously, somewhat of the mystery of that strange world just outside the door,” you may also appreciate A Naturalist at the Seashore.

The last edition of this book has long been one of the most frequently referenced books on my shelf so I was excited when a new edition came out in 2019. It’s twice as thick as the last edition and completely updated covering all of the most commonly encountered organisms of the tidal zone ranging from crabs and isopods to seaweeds and lichens.

This book may help identify down to species in some groups, like sea stars or sea urchins, but the strength of the guide is getting you to the right type of organism because it has a sampling of all the different groups with clear photos and descriptions. To identify most groups to species, like crabs or nudibranchs, you’ll need guide books to those, and fortunately, there are many out there for the Pacific Northwest.

Beachcombers Guide is an indispensable resource for anyone curious about marine life in the Pacific Northwest.

Once I learn what type of organism I found on the beach in The New Beachcomber’s Guide, whether it’s a barnacle or bryozoa, I turn to this book. Beachcomber’s Guide is good for identifying, but the information on each organism is minimal, which is where this book comes in. Seashore Life of the Northern Pacific Coast has some plates of animals, but it main use is the plethora of information about all the life of the seashore organized by habitat type.

The habitats are broken out by docks and pilings, rocky shores of the inner Puget Sound as well as the outer coast, sandy beaches and finally, bays and salt marshes. Within the chapters, the habitat, such as Puget Sound, is divided into zones so you can get a clear sense of what can be found in the high intertidal down to the lower tidal zones. And within these sections are discussions on the various life like mussels or limpets.

Each organism has in-depth information, but because there’s a lot of overlap between the chapters and zones, it can be disjointed to find information on a specific species or group of organisms. But this is an essential book for anyone interested in life of the tidal zone in the Pacific Northwest.

Among the guides I have of specific groups or sea life like seaweeds, crabs or sea stars, this one is never far from my desk because I frequently reference it. Not to mention nudibranchs are one of my favorite marine creatures. Fortunately there are a lot of people who search out nudibranchs, and as a result there are a lot of regional guidebooks for them, throughout the entire world.

This guide covers not just nudibranchs, but all sea slugs. Although it includes most, if not all of the species of the region, it’s a fairly slim volume and there is only one photo for each species, which can be challenging because many nudibranchs have several color variations. It also shows few of the nudibranchs’ eggs which are frequently encountered in the tidal zone. But much of that can be found online and this book is an essential guide for nudibranchs. 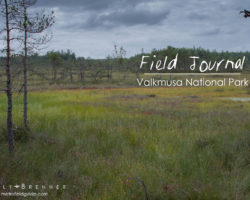 The promise of extensive bogs and rare moths and butterflies drew me to my final destination on my tour of Finland's National Parks. It had begun with a visit north to Syöte National Park where I spent a few days 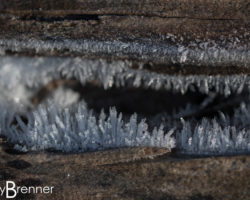 Poem of the Week: Winter-Time

By Robert Louis Stevenson Late lies the wintry sun a-bed, A frosty, fiery sleepy-head; Blinks but an hour or two; and then, A blood-red orange, sets again.