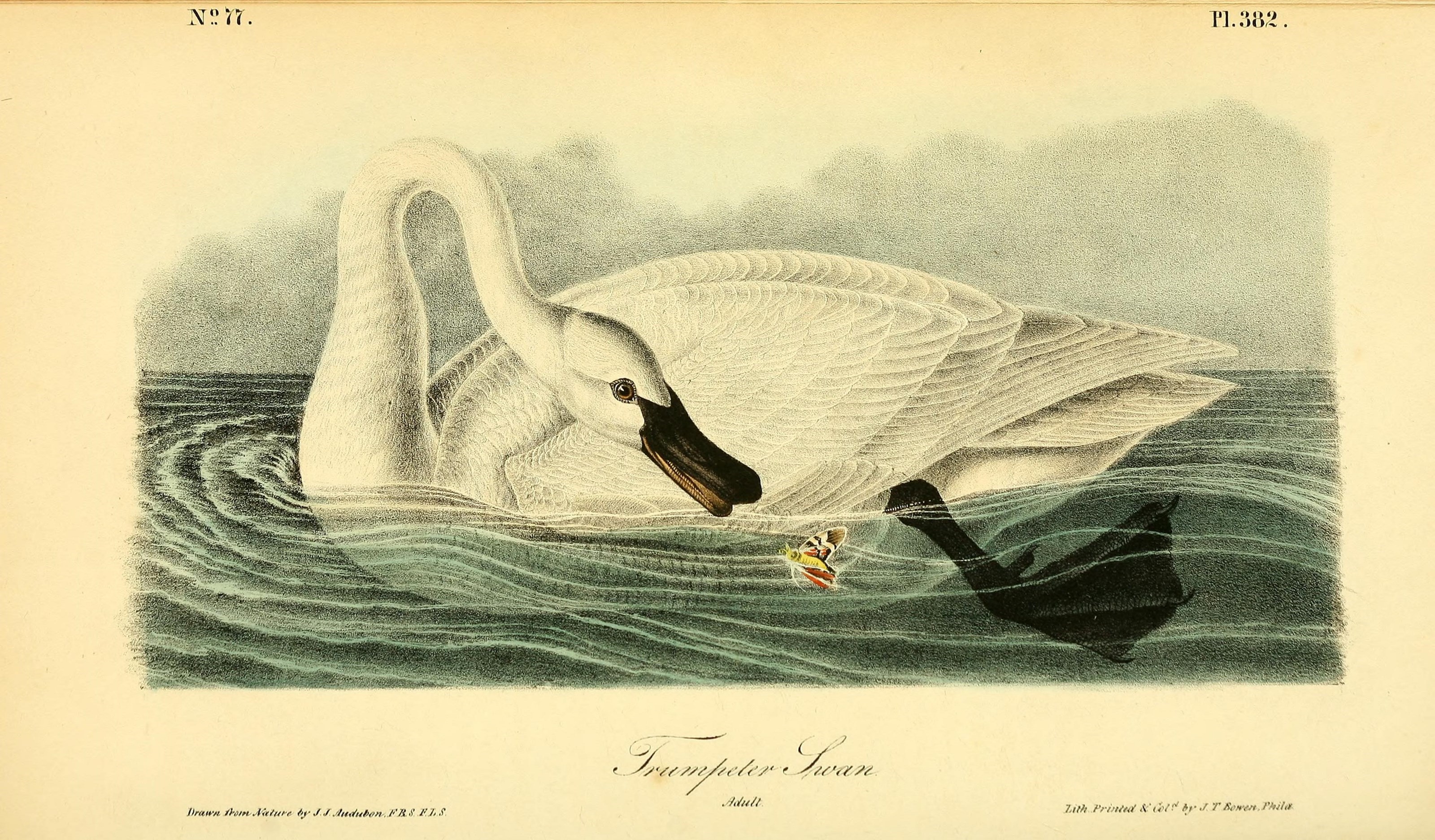 By Kelly BrennerJanuary 8, 2016No Comments

Today on our commute I noticed more than two adult Trumpeter Swans in Lake Washington (which I reported on Day 5), so on the way home I stopped and got this quick video (below) as they moved north of Madrona Park. I counted 7 adults and 5 juveniles. There were also the regulars, Bufflehead, Common Merganser, American Coot, Mallard, Ring-necked Duck and Common Goldeneye.

Also today, while working on an unrelated project, I happened across the Trumpeter Swan image above, by John James Audubon. Serendipity.

To form a perfect conception of the beauty and elegance of these Swans, you must observe them when they are not aware of your proximity, and as they glide over the waters of some secluded inland pond. On such occasions, the neck, which at other times is held stiffly upright, moves in graceful curves, now bent forward, now inclined backwards over the body. Now with an extended scooping movement the head becomes immersed for a moment, and with a sudden effort a flood of water is thrown over the back and wings, when it is seen rolling off in sparkling globules, like so many large pearls. The bird then shakes its wings, beats the water, and as if giddy with delight shoots away, gliding over and beneath the surface of the liquid element with surprising agility and grace. Imagine, reader, that a flock of fifty Swans are thus sporting before you, as they have more than once been in my sight, and you will feel, as I have felt, more happy and void of care than I can describe.

Lest we forget that Audubon wasn’t the dreaming poet – he in fact shot and killed countless birds – here is his description of shooting swans:

One morning of this latter kind, our men formed a plot against the Swans, and having separated into two parties, one above, the other below them on the ice, they walked slowly, on a signal being given from the camp, toward the unsuspecting birds. Until the boatmen had arrived within a hundred and fifty yards of them, the Swans remained as they were, having become, as it would appear, acquainted with us, in consequence of our frequently crossing the ice; but then they all rose on their feet, stretched their necks, shook their heads, and manifested strong symptoms of apprehension. The gunners meanwhile advanced, and one of the guns going off by accident, the Swans were thrown into confusion, and scampering off in various directions took to wing, some flying up, some down the stream, others making directly toward the shores. The muskets now blazed, and about a dozen were felled, some crippled, others quite dead.