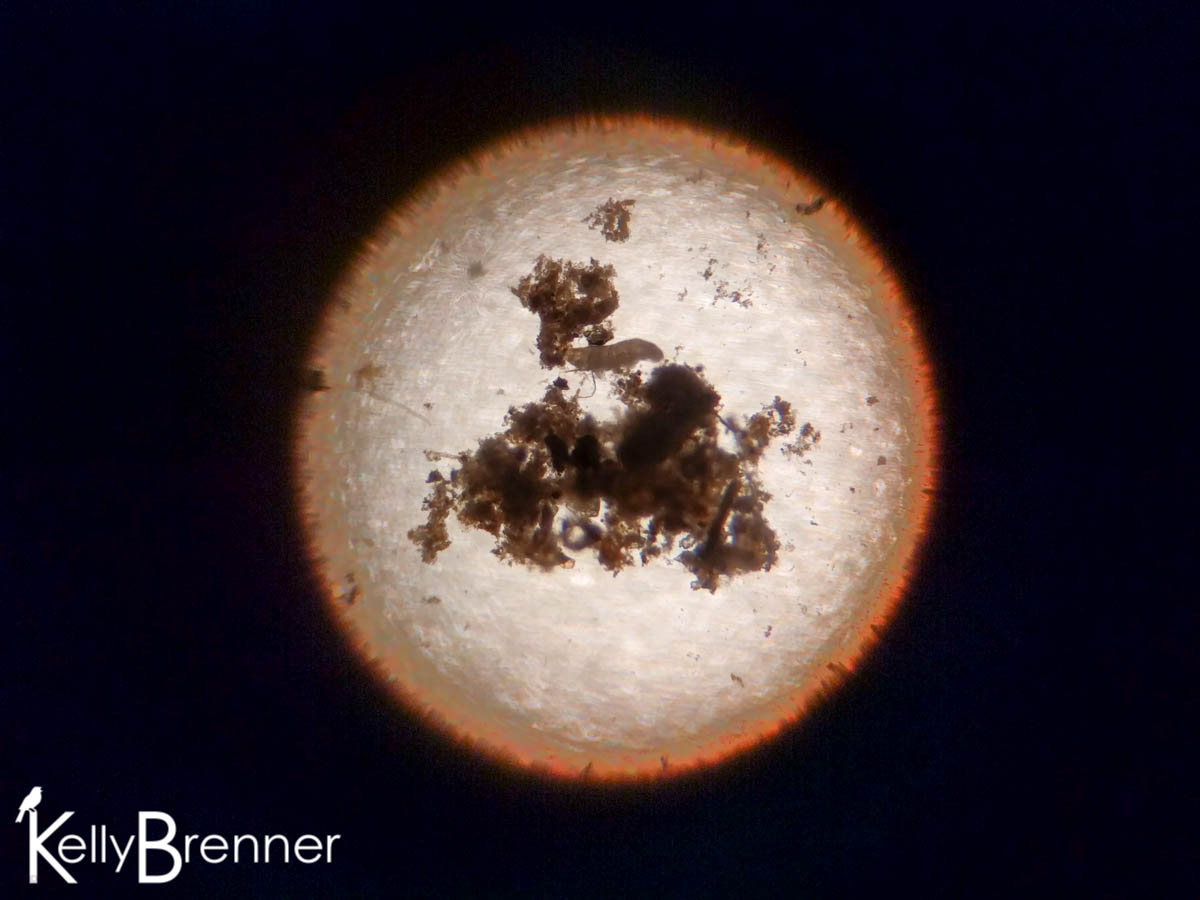 Yesterday before we left for preschool, we took the time to gather a couple clumps of moss and soaked them in petri dishes while we were gone. In the afternoon after we returned home, we discarded the water and squeezed the saturated mosses over our petri dishes and hurried inside to the microscope to see what we could find. I was on  the hunt for a tardigrade. I’d read about them and desperately wanted to see one myself. The idea that they live in our yard thrilled me, and after I wrote about moss and tardigrades on Day 42 I ordered a set of petri dishes to search for them myself.

When I got the dish under the scope, I realized how tricky it was going to be because it was full of brown fluff, small bits from the moss. Immediately I could see many things moving about in the water, it was breathtaking how much life was squeezed out of that one small lump of moss. First I saw many bizarre animals which moved very quickly and either swam or inched along like worms. They had a tapered front and a fatter back-end. The second thing I found were the longer and larger worms which I believe were nematodes. Something out of focus caught my eye and I refocused on the surface of the water where I found several more animals. I believe a couple were mites but I found several of a translucent white animal with six legs, a split tail and segmented antennae. I haven’t a clue what they were.

I searched and searched through the brown jungle taking turns with my daughter who seemed to be fascinated by the life moving about in the water. It wasn’t until just before dinner time when I finally caught sight of my first tardigrade. Once I saw its slow movement and it’s distinct legs and claws I knew there was no mistaking it for the rest of the animals in the dish. I yelled out and my family came rushing in to all take turns looking. It was quite possibly one of the most exciting things I’ve ever found in nature. I was extremely excited and my daughter and I exchanged high fives.

Tardigrades are just as wonderful as I’ve read about, they walk around, moving their individual legs more like a mammal than an invertebrate. Shortly after I found it, it appeared to go to sleep. It floated with its head up, slightly curled up and then stopped moving. When I finally tore my eyes away and scanned the rest of the petri dish I found much less movement as well. I wonder if they had all gone to sleep or were just tired of my microscope light.

It’s easy to find tardigrades yourself, I followed the directions on this page. I would add one thing: we did learn a valuable lesson, make sure your moss isn’t muddy, as my daughter’s moss turned the petri dish water brown with soil. It was impossible to see anything in it.

This morning after we got up we raced back outside to soak four more petri dishes of moss and we plan to search them for more tardigrades this afternoon.

While writing this post I searched the petri dish from yesterday one more time and found another tardigrade. It was moving its legs trying to get move around. I can’t help but anthropomorphize here, because it looked exactly as though it were getting into a sleeping bag. It moved under the brown fluff, turned itself on its back and then stopped moving. It lay there still, looking like nothing more than a bear asleep in bed.

The photos above are pretty terrible, I tried taking photos with my phone through the microscope lens. I will try to find a better way. I did try sketching the tardigrade, but before I could do much it stopped moving making it hard to get a good view of it. That is also something else I will work on.

Update:: We did end up finding more tardigrades, this time in the moss collected from our driveway. I found two individuals who were orange, a stark contrast to the clear/white tardigrade we found the day before. I added two photos to the slideshow above.