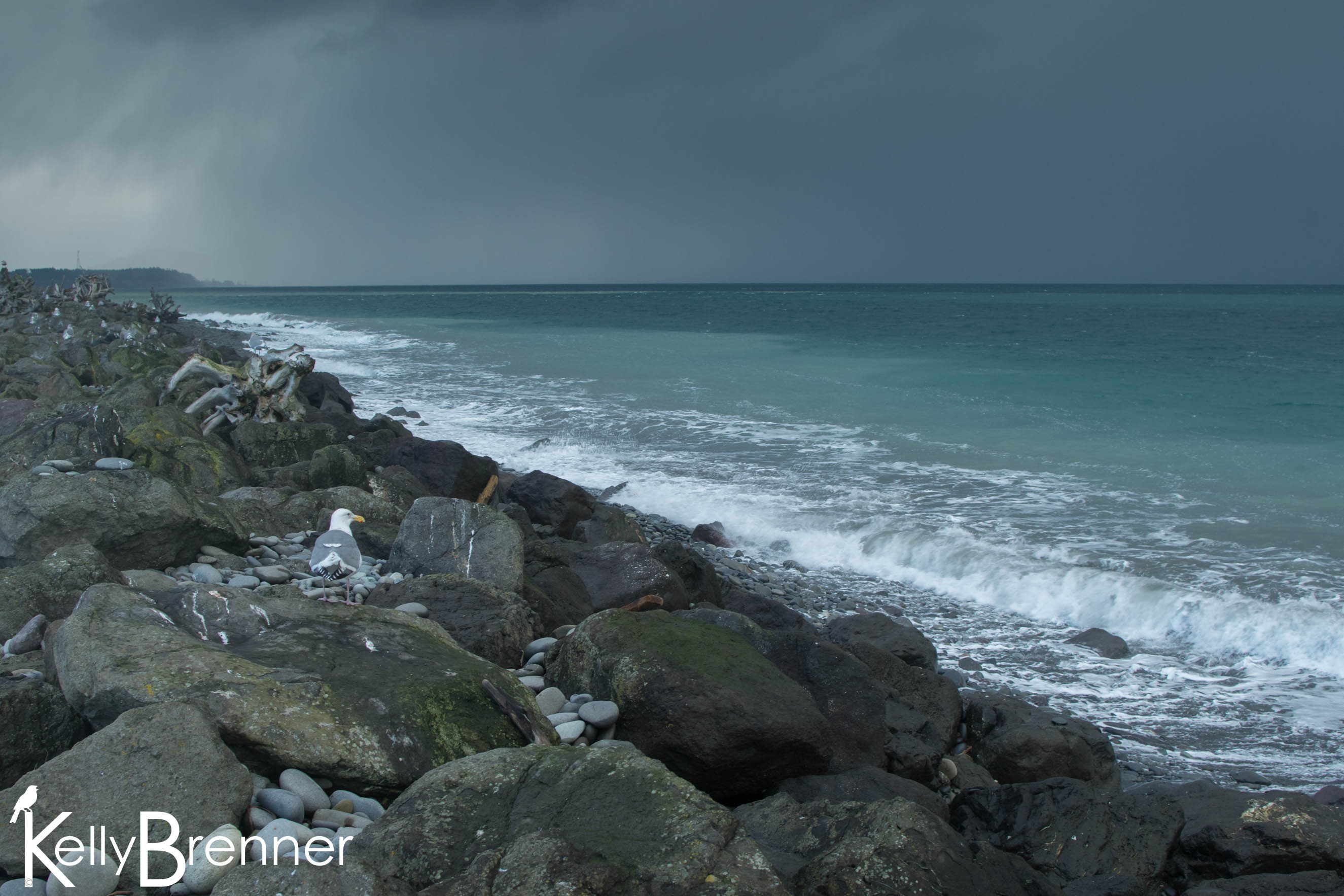 With only a few days left of 365 Nature I decided to make the most of it while I could. I decided to head to the Olympic Peninsula and visit Dungeness National Wildlife Refuge, someplace I’d only been once before, nearly two years ago. The last time I was there it was a very foggy day which made the coastal forest stunningly beautiful. However magical the fog was in the forest though, it wasn’t quite so wonderful on the beach because I couldn’t see much of anything.

This morning when I arrived it was dry and cloudy, but not foggy. Once I landed on the beach I could see the Olympic mountains to the west covered in a new layer of snow and the sky was a confusing mix of clouds and sun. Patches of blue sky were revealed while lower down a fine sea spray mist presented itself like a fog. The tops of the mountains were similarly coated in a fine misty fog, melding with the white snow.

The tide was high again as it’s been this month as I found on Day 357 when I visited Fort Flagler State Park. Only on that day the sand spit was very short and it was easy to retreat to solid ground. Today I arrived a couple of hours before high tide and there was no beach to walk along and very little sand spit. High tide today was just before 1pm at plus 7.52 and as a result it was a wild place to walk. The Dungeness spit is five and a half miles long with a lighthouse near the end and between the beach along the Straight of Juan de Fuca and Dungeness Bay is a tangle of large driftwood. It was this route I had to walk along and at the beginning it was quite fun balancing on logs, hopping from one to the next. This strategy was unintentionally wise because occasional waves would push water up into the driftwood soaking anyone too slow to jump to higher ground.

I walked slowly, stopping regularly on logs to survey the water for birds or other animals. There was a large flock of American Wigeon on the bay side and a handful of Brant. On the other side I saw some gulls and a few Surf Scoters. Large, tangled piles of Bull Kelp had been washed up on the shoreline and I could see the tops of some kelp out in the water.

Robert Macfarlane’s The Wild Places came to my mind as I walked along the spit because this truly is a wild place. The monster tide coupled with enormously angry waves today made the beach a completely unruly place to walk. As I tried to judge the tide’s peak and dodge driftwood I realized how little in control I was over the situation. A single speck on an exposed beach, I could easily be washed away if I wasn’t careful and attentive. It’s at times like this one considers tsunamis.

I spent a lot of time watching the waves crashing into the rocky beach. As the waves pushed the water into the stones I heard a sound more like a crackling fire as stones crashed into other stones behind the weight of the water. The white bubbles would flow up the beach under the log I stood on and for a moment it felt like I was standing over snow instead of water. As the water retreated it felt less like a slide back into the water and more like it was being sucked back in.

During one of my driftwood surveying stops I noticed a pair of Brant in the bay along with a third goose with a white head. I’ve been watching birds for a long time but this particular goose drew a complete blank for me, something that very rarely happens. I pulled out my phone to consult my bird app and realized I was looking at an Emperor Goose, a bird more typically found in Alaska. While not common, they do venture south from time to time. I was able to get some photos of it as it walked and swam by my driftwood perch. On the opposite side of the spit I noticed more Surf Scoters and realized a couple weren’t quite like the others. I used my binoculars to see they had yellow/orange bills and no white markings on their body, Black Scoters.

After a couple of hours blissfully navigating the obstacle course the wind picked up. It suddenly reminded me very clearly of Fort Flagler and I pulled my jacket’s hood up and got out my gloves. Pretty soon I started feeling myself being pelted and at first thought it was sand being blown up from the beach. As I looked down to place my next footfall I noticed dark dots on the rocks, the rain had arrived. At the moment the wind was blowing from behind me throwing rain, sand and sea spray against me. My previously sure footing on the now wet driftwood was suddenly precarious as the wind tried to push me off. I gave up and let go, the wind sliding my feet off the log where they landed in the soft sand. I considered turning back but the thought of everything that was hitting the back of me hitting my face kept me walking on.

Pretty soon my jeans were soaked on the left side and my gloves started getting wet, not only from the rain, but each time I held onto a piece of driftwood to keep from losing my balance. My rain coat kept my top half dry and warm and for that I was grateful. My legs were wet, but as I kept moving they felt warm. It was this moment when I felt the power of nature with every cell in my body. The wind made me stumble, the wind made my eyes weep, the waves kept me constantly watchful and weary and the rain stuck my pants to my legs.

Finally the rain eased and the winds with it and I was able to take stock of my person. My glasses were coated on both sides with salty spray and I could barely see. My scarf was wet in the front, some of my hair which had been whipped out by the wind was wet and salty. My shoes had kept my feet dry and my upper body was unharmed. All my camera gear was safely tucked away in my bag protected with a rain cover. But my legs were soaked and I knew they would soon feel it. I pushed on a little further before finally turning and walking back. I don’t know how far I walked, not as far as the lighthouse, not even half that far.

When I returned to my car I took a new, dry pair of pants to the restroom to change. I wasn’t surprised to find my legs as bright red as a boiled crab and it took a long while to warm them up. I had enough daylight left for another destination so I drove to the Ediz Hook Reservation for Native Birds in Port Angeles. The weather had calmed a bit and as I drove along the narrow spit I spotted an otter running down a beach and into the water. I pulled into a parking lot nearby and sat to watch, having a snack while I waited. After a time I saw the otter return to the beach, a flat, black and white fish in its mouth. I walked to the beach, slowly to not disturb the otter, who kept its eyes on the gulls swooping around it. It climbed up onto a log where it started to eat the fish in a brief sunbeam.

I drove to the end of the spit where I stopped again to look out on the other side. The water had turned an emerald green color that looked tropical, while the sky had turned a furious dark blue. Perched in front of me, the bright white of a gull nearly blinding against the dark sky. These are the moments which make winter travel worth it. No summer day can compete with the drama of winter weather. There is so much emotion and imagination in these landscapes. Anything can happen and it wouldn’t be surprising.

I pulled into another parking lot as the rains returned and watched a group of Harlequin Ducks foraging right at the water’s edge. In the distance, harbor seals surfaced and slid back underwater. As the clouds swallowed the lowering sun I left. 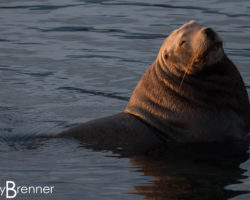 In 2016 I’m doing a 365 Nature project. Learn more about the project and see all the 365 Nature posts. It was very nice to be able to stay in Port Angeles so I had the opportunity to start early in 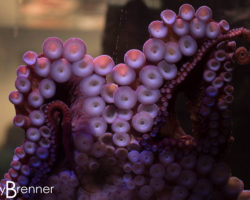 In 2016 I’m doing a 365 Nature project. Learn more about the project and see all the 365 Nature posts. This summer I developed a particular fondness for our marine life after visiting extreme low tides at Alki Beach on Day