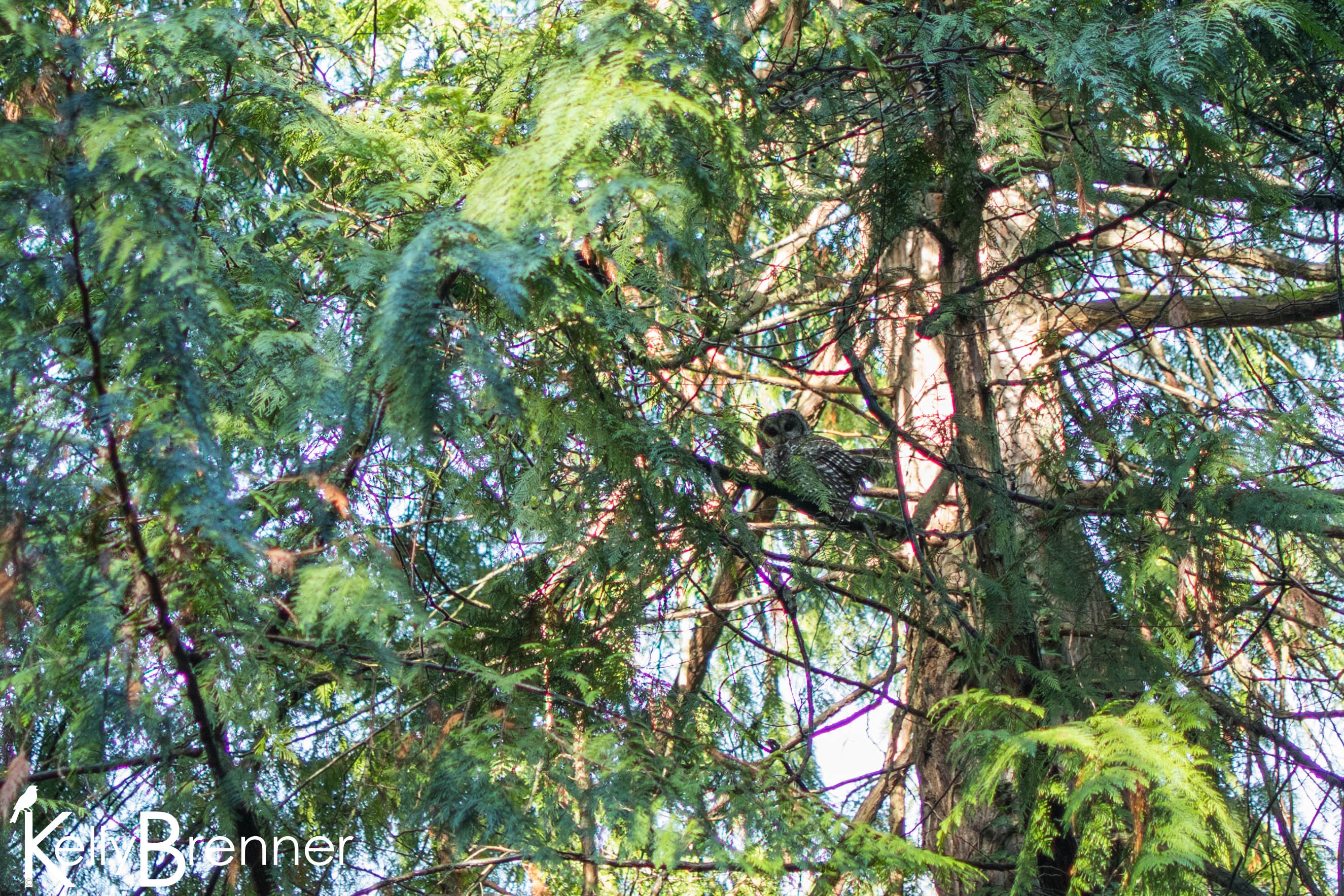 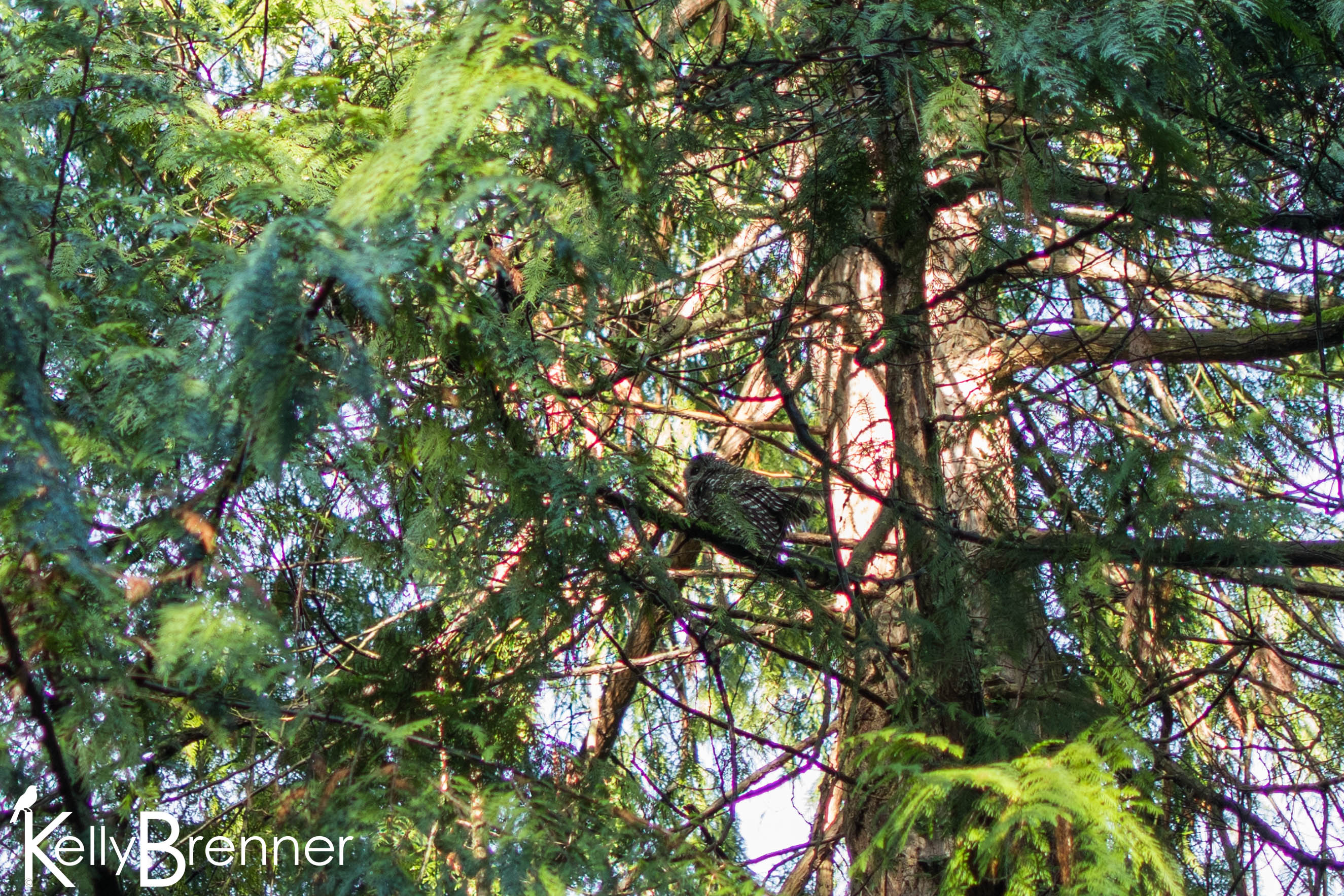 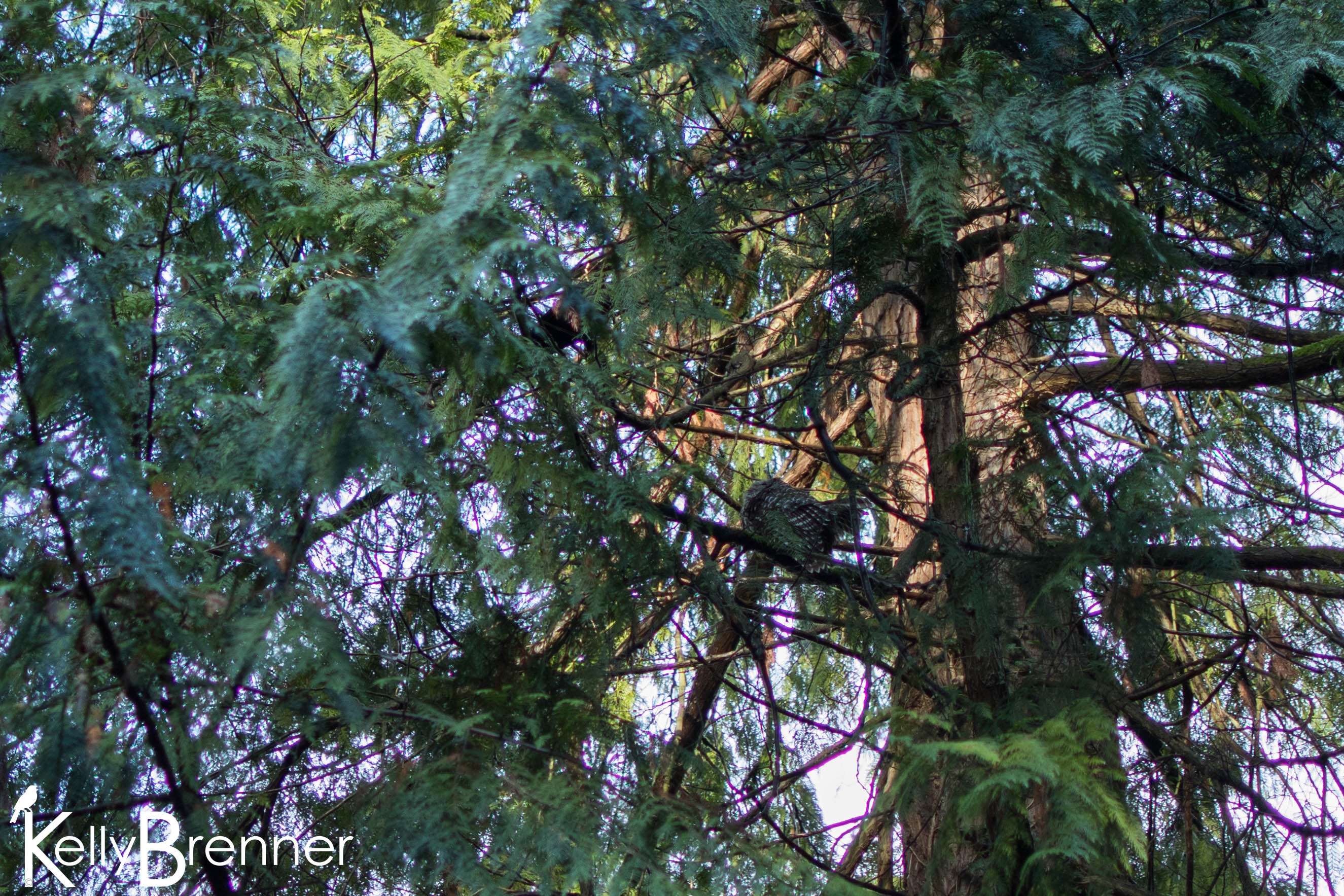 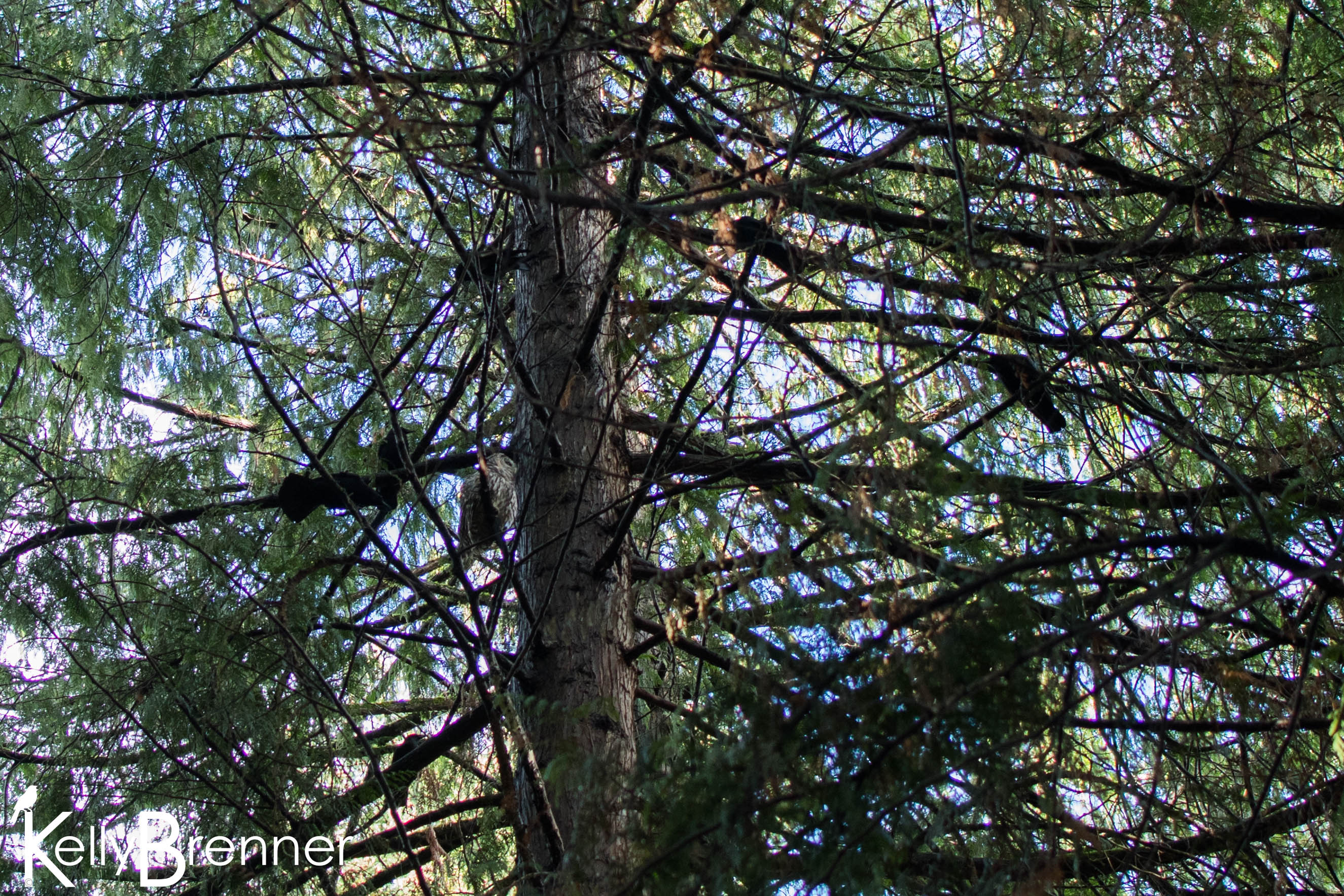 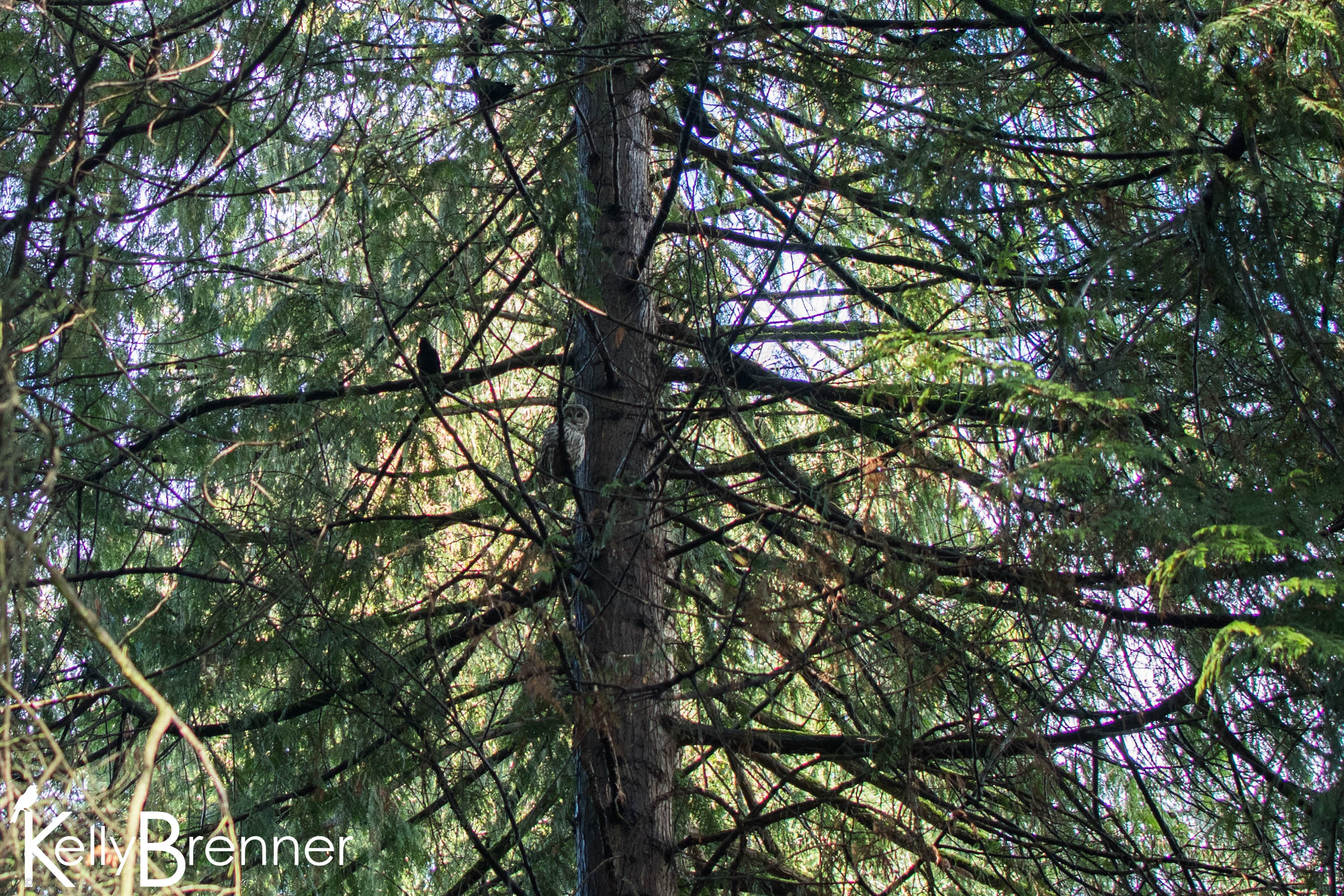 As soon as I stepped out of my car this morning at the arboretum, I knew exactly where I was going. I could hear a chorus of crows and I immediately set off in their direction to see if they had an owl in their midst. It didn’t take long to find it, a Barred Owl on a branch surrounded by crows. What was interesting were the flickers joining in the ruckus, which I hadn’t seen before. At least two of them called from above the owl and flitted around like the crows. I also heard, although didn’t see, Steller’s Jays calling from the same tree, presumably also joining in. I’ve seen crows mobbing with Anna’s Hummingbirds, but never with flickers before. As I watched the owl and crows, the owl went from an upright position, to nearly laying flat on its belly. It spread its wing slightly, drooping them downward, and the tail went upward. There it sat in this strange position while I watched.

Unfortunately I left my 200mm lens at home because I was expecting rain today and had to make due with the 30mm lens.

I later ran into Larry Hubbell from the Union Bay Watch blog and he said he’s seen Cooper’s Hawks do that position over food. He told me he usually sees juvenile hawks doing it to protect their food source from their siblings. Perhaps the Barred Owl was doing something similar. I didn’t see anything in it’s talons, but it could have easily had something.

On my way back I spotted another owl being harassed by crows, not too far from where I saw the first owl. This one though, was sitting tall, like I usually see them perched. A half dozen crows gathered around, pulling branches and twigs off the tree and dropping them down towards the owl. Once in a while a crow would dive close to the owl and the owl would respond with a head feint, making the crow jump away. Then the furious caws would begin again. If a crow hopped too close, the owl would give a slight flick of the wings and all the crows would jump back a branch.

I went back to the tree I saw the first owl in and it wasn’t there. It’s possible I saw the same owl twice, or I may have seen two owls like I did last week on Day 315. I haven’t hardly seen the resident Barred Owls since their chicks fledged and now I’m seeing them a lot. I wonder if the juveniles are still around the arboretum, explaining why I’m seeing them so frequently now. Or perhaps I’ve just been really lucky. 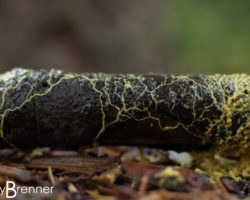 In 2016 I’m doing a 365 Nature project. Learn more about the project and see all the 365 Nature posts. This morning was cold, the first really cold day we've had this autumn after a record-breaking warm start to the season. 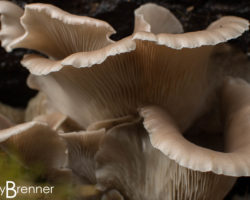 In 2016 I’m doing a 365 Nature project. Learn more about the project and see all the 365 Nature posts. Over the last month I've been very focused on fungi, and at times it seems inevitable. Because I've noticed so many