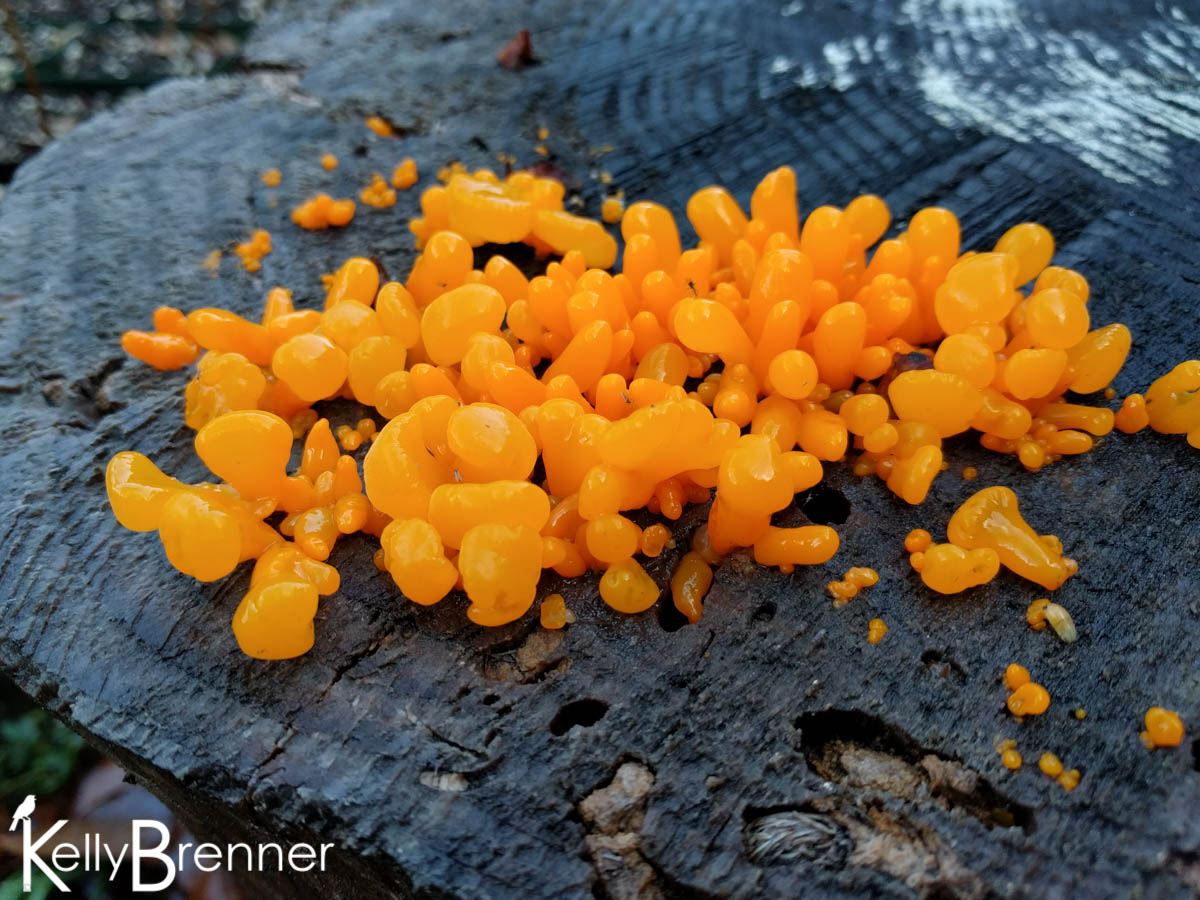 The great irony of having a morning without rain finally today – and a sunny day no less – was that I had an appointment and didn’t get to have my usual walk. During drop-off at my daughter’s forest preschool, I noticed a huge light brown mushroom growing nearby. It was easily the size of a dinner place, perhaps 10-11″ across. Where the cap had split it revealed a pink inside which reminded me very much of salmon flesh.

After my appointment I sped back to the arboretum and opted to walk through Marsh and Foster Islands. I’ve been hoping to encounter an otter, but there were so many people out on this sunny and warm day that I’d little chance seeing one today. The weather seems to have cheered up the birds and I encountered several flocks of small birds, chickadees, Bushtits and kinglets were foraging in the trees with gusto. Canada Geese and Double-crested Cormorants were in Union Bay and I watched one cormorant swim under the bridge through the water. I stood and watched the cormorant for awhile, diving down and popping back up in unexpected places. As I watched, I noticed patches of tiny bubbles in the area the cormorant was diving. At first I suspected they were from the cormorant itself, but they would continue as the cormorant popped out of the water far away. What I suspect I was seeing, were air bubbles released from the aquatic vegetation as the cormorant swam through it during its dive.

The water was very clear and I could see the aquatic plants easily, which struck me as odd. It took some time for me to realize the dense green algae that had covered the area all summer was dying back. In some places it had disappeared entirely. Likewise, the water lily pads were also dying back opening up the surface of the water. I inspected the area around the floating walkway very closely now that the water was so clear because I was looking to see if I could find any signs of the muskrats I observed there on Day 195. As I neared the end of the walkway, I immediately noticed a pathway through the vegetation that led to the bank. The pathway was completely clear of the thick aquatic plants that dominated everywhere else and it even looked deeper, like a channel through the shallow water. At the end, a floating shelf of mud and plants hid what was underneath, but I suspect it was the muskrat’s burrow. The channel split into a ‘y’ and on the other side, mud was piled on the bank and I suspect another burrow entrance was under the water level. With the water in that area now getting so shallow and the water so clear, I suspect there’s very little chance at seeing the muskrats during the day now.

I continued on to Marsh Island and found an abundance of moss, fungi and slime molds. At the base of a small tree stump, I found some large mushrooms sprouting and underneath a black slug sliming around. I stopped to examine one trunk and found it covered in a huge diversity of mosses, many different shapes and shades of green wove together like a quilt. On a down branch, I found a large cluster of what I think was Candlesnuff Fungus, probably the largest group I’ve ever seen. A short distance away, I noticed some tiny, white mushrooms growing on the bark of a tree and as I looked, I discovered the tiny fungi were growing all over the trunk of that tree, and only that tree. Underneath, on another down log, I spotted a slime mold, pink and coral-like. With it was something I’m not entirely sure what it was. It was brown and slimy and the not-yet-slimy parts looked like a toasted marshmallow.

When I went to pick up my daughter, one of the teachers pointed out a stump with a large patch of bright, orange fungi.