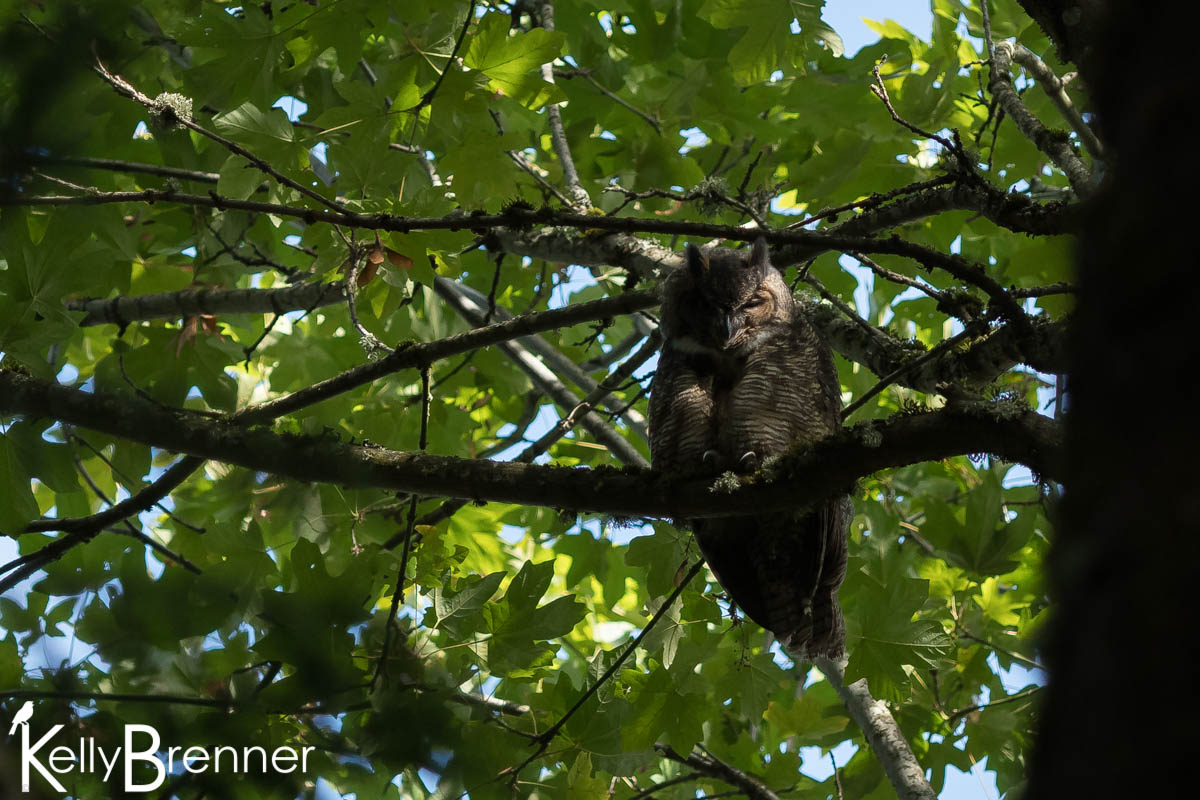 Some days I choose the right path to walk and today was one of those days. I set off through the arboretum and took a left to go through a native plant garden and as I wandered the paths I heard warning calls from small birds like Bewick’s Wrens. As I watched I saw an Anna’s Hummingbird also joining which I frequently see them do when there’s a Barred Owl. This is the same place I saw a Barred Owl last autumn and since I hadn’t seen them in awhile I eagerly searched the trees looking for one. Although I walked back and forth and looked up and down the tree, I couldn’t see anything until I turned and walked back again and looked in front of me. There, sitting right over the path I had been pacing, was a Great Horned Owl, looking down at me. I was astonished as I’ve never seen anything but Barred Owls here before and it certainly wasn’t a Barred Owl. I only managed a couple of shots before it flew across the path into the dense evergreen trees. I walked and spotted it again and tried getting more photos, but it was too dark. In my excitement, I stepped on my dog’s foot and her squeal startled the owl again and it flew back across the path and up into a Bigleaf Maple tree. There I had a clear view of it, although it was high up in the tree, and I watched it preen and then sleep for a time before preening again.

The entire time I watched the Great Horned Owl in the tree, no birds disturbed it or issued warning calls. Then out of nowhere, a Cooper’s Hawk appeared with a loud alarm call and proceeded to harass the owl for the next twenty minutes or so. It flew back and forth across the branches while the owl, for the most part, ignored it. At one point the hawk landed very near the owl which certainly got the owl’s attention, but quickly flew off to a more distant branch. What I found fascinating, was the complete absence of crows over the almost two hours I watched the owl. Not once did they descend on the owl despite the warning calls of other birds. The Cooper’s Hawk finally left the Great Horned Owl in peace and it looked settled in for another snooze so I walked to the pond.

The Paddle-tailed Darners I spotted on Day 270 were still there cruising the pond edges. One caught my eye as it flew away from the pond because it looked like it had something in it’s grip. I followed it to where it landed in a tree and saw it was eating something with wings, but whether it was another dragonfly or something else, I couldn’t tell. Later I spotted more Striped Meadowhawks and was able to get photos of them with my macro lens this time.

When I first arrived at the pond, one of the workers was scooping out algae from the pond and as I took photos of the meadowhawk I noticed the pile of aquatic plants and algae. My fingers itched to dig through it and see what had been scooped up with the plants and algae. So I sat down next to the pile and dug in. I found many damselfly larvae and at least two dragonfly larvae I believe. I also found many, many snails and quite a few scud. I saved all of them that I could find and I know there must have been many more left in the pile. Some I put in my container to bring home, many of the damselfly larvae simply sunk to the bottom at first, but they seemed to quickly recover and start swimming around. I don’t know how long they can survive out of water, fortunately for them the pile was still very wet.

Magically, when we arrived back at home, I startled a Cooper’s Hawk that was perched on our roof, right over our front door. It took off, flying right over us and around the house.