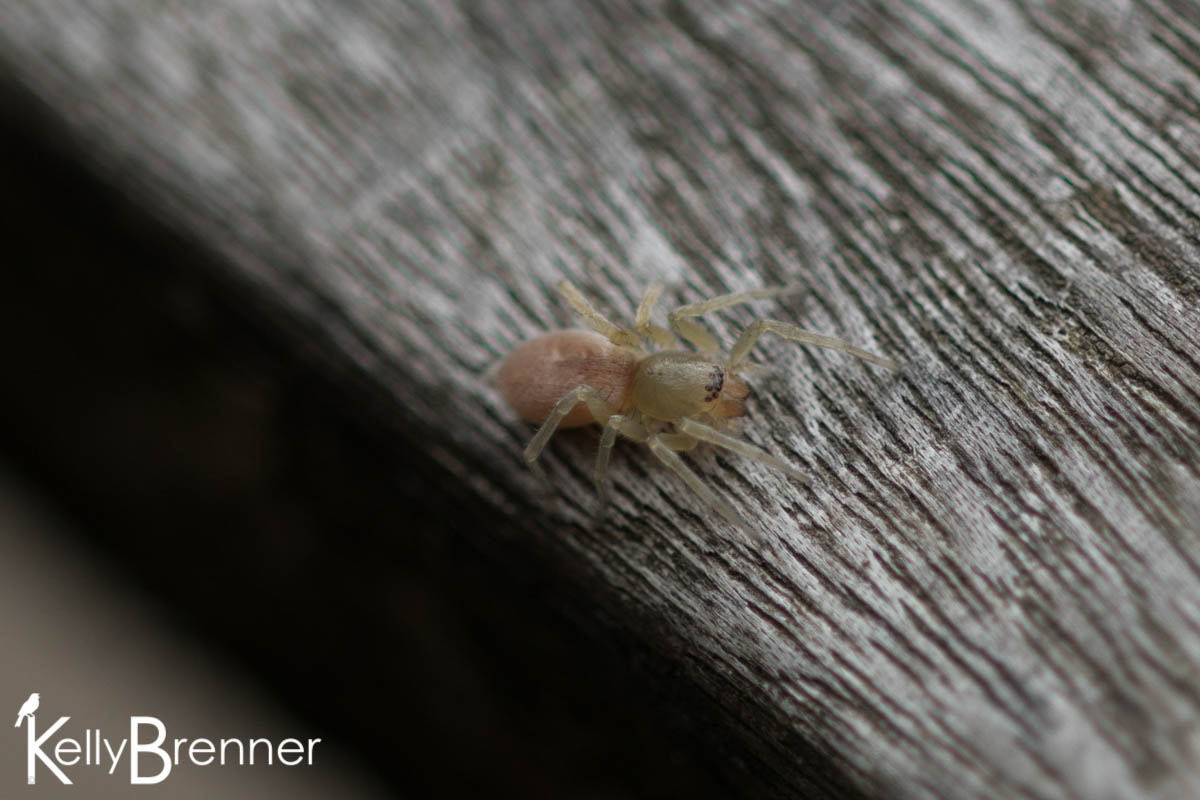 Some may say “when life hands you lemons, make lemonade”, but I say, when the wind blows a spider onto your lap, take a photo. What else is a naturalist to do when a pink spider falls out of a tree with a leaf and lands on the keyboard? I can’t say I’ve ever encountered a spider that was pink before, but this one had an abdomen that was certainly that shade. You never know what the wind will drop on you, better take advantage of it.

This year, my daughter is in 5 day-a-week forest preschool and I’ll be visiting the arboretum much more than last year. I’ve already found one benefit, seeing how things can change with only one day difference. Yesterday, on Day 258 the weather was warm and sunny, today it’s cool and the sun has not broken through the clouds yet. It’s certainly trying though, the clouds are thinning out and the warmth comes in waves.

Early today I encountered a large flock of songbirds, Bushtits, Black-capped Chickadees, Brown Creepers and others I couldn’t see. I heard calls I didn’t recognize and I suspect they may have been passing migrants joining the foraging flock. On the opposite end of the arboretum I later crossed paths with another large flock, this one with Red-breasted Nuthatches, Golden-crowned Kinglets along with the chickadees and Bushtits.

I visited the pond again to see if I could get more looks at the huge swarms of what I suspected were water fleas yesterday. With the clouds it was hard to see in the water, but I couldn’t find any swarms where I saw them yesterday. I dipped my net in to see if maybe the light just didn’t allow me to see and it came up empty, whereas yesterday every scoop came up with a dozen or more water fleas. They appeared to have simply disappeared, or dispersed. Even though it was cool, a darner buzzed right in front of me.

The other invertebrate I looked at yesterday was still abundant, the strange worm or larvae that looked to be making a cocoon out of the algae. I pulled another one out of the water and this time it left its cocoon and swam around the cap. I got a better look at it and I’m pretty sure it’s not a worm, but instead a larva. It had a distinct head, hairy spikes on it’s backside and it appeared to have two swimming appendages behind it’s head. They weren’t exactly legs, but looks like fuzzy flippers.

The sun soon came out and I scanned the water again with still no signs of the thousands of massing water fleas from yesterday. A curious event.