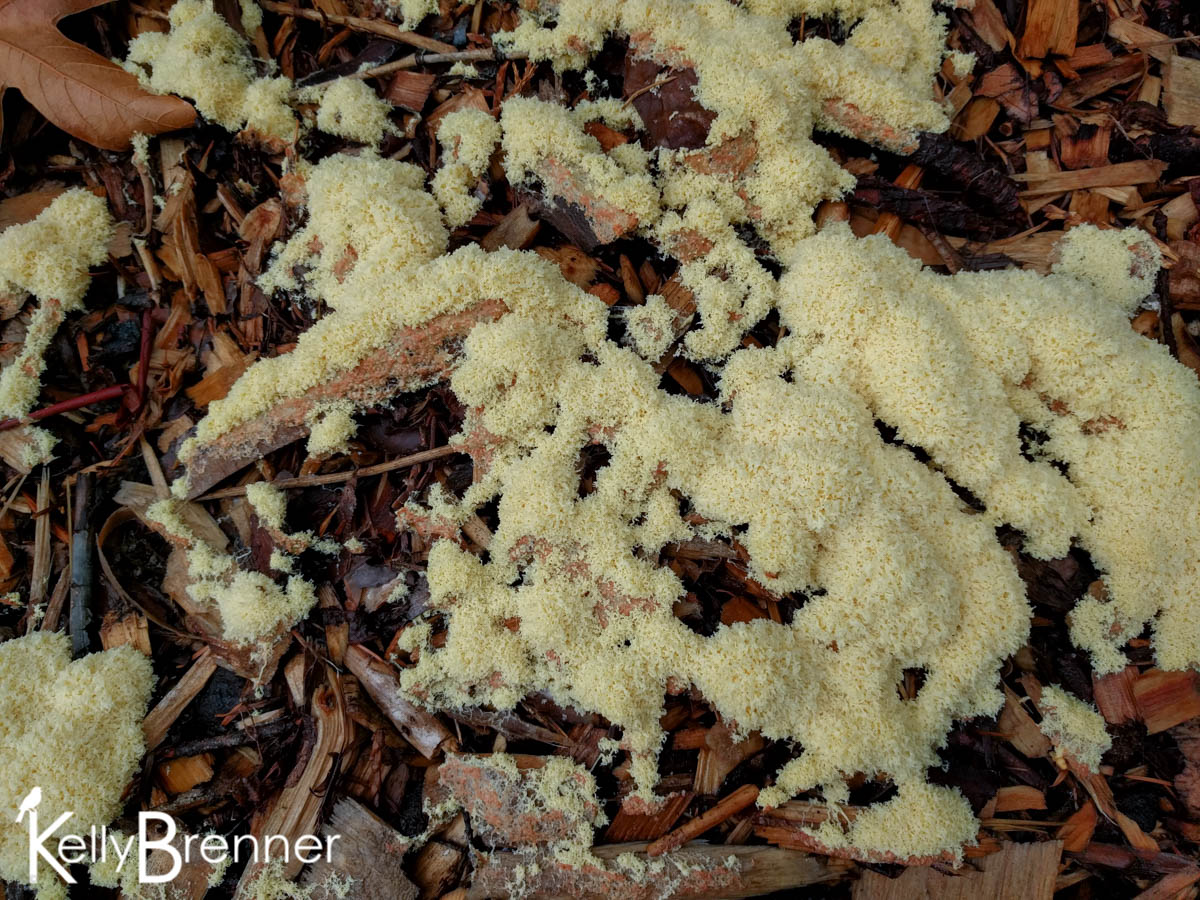 Next to my daughter’s forest classroom this morning we found a slime mold. It was hard to miss, being a bright lemon color and at least a foot or more in diameter. We stopped to investigate it and found it resembled a pile of finely shredded cheese, but  was sticky, like dough with too much water. It was spreading on bark mulch which was fairly wet from irrigation.

After I dropped her off and started walking, something caught my eye under a tree, on the fallen leaves. It looked like a small patch of fog over the leaves, or perhaps a piece of sheer nylon on the ground. As I got closed I could see a hole in the middle, the nest of funnel-web spider. When I stooped down it retreated into the hole, but it came back out quickly and I was able to see it sitting at the entrance of the hole. Shortly after, another spider ran across my path. With the spiders and cool morning, it very certainly felt like autumn today. It won’t last, as we’re expecting another heat wave later this week.

I spent time watching the pond again and found many damselflies had emerged since I watched them on Day 230. I know because on that day I collected all the exuvia from the corner I had been watching. Today there are a dozen or more there. I collected them again and I’ll see how many there are on Wednesday. I found one damselfly on the water and I lifted it out on my finger and could see one of its wings had a bend at the end, preventing it from flying, despite trying. As I looked into the water, I found wings scattered on the top, damselfly wings I believe. I also found some dead damselflies in the algae and I wonder how much the tough strands of algae plays a role in damselfly mortality.

I watched for a time since I didn’t bring my camera today, and I rescued at least two damselflies who had become caught in threads of dried algae. They violently struggled against the threads, but to no avail. I was able to catch a couple and gently pull the algae off, but I don’t know if they were damaged by the struggling. A couple of the exuvia I pulled off the wall were likewise attached to dried strands of algae. It seems to me that the algae does play a role in damselfly mortality.

As I watched, three summer camp groups arrived at the pond for some pond dipping, and it wasn’t long before some of the kids started bringing me bugs and asking questions. It was fun to tell them about the damselflies and dragonflies that live in the pond. A couple kept coming back to me and showing me what they had found. And it was fun to see what they caught, particularly a very large dragonfly larva.

Whether it was because of the activity of the kids, or the increase in algae cover, but I found no damselflies emerging today. It was also cooler in the morning, but I was still surprised after the last few visits I couldn’t find any emerging.