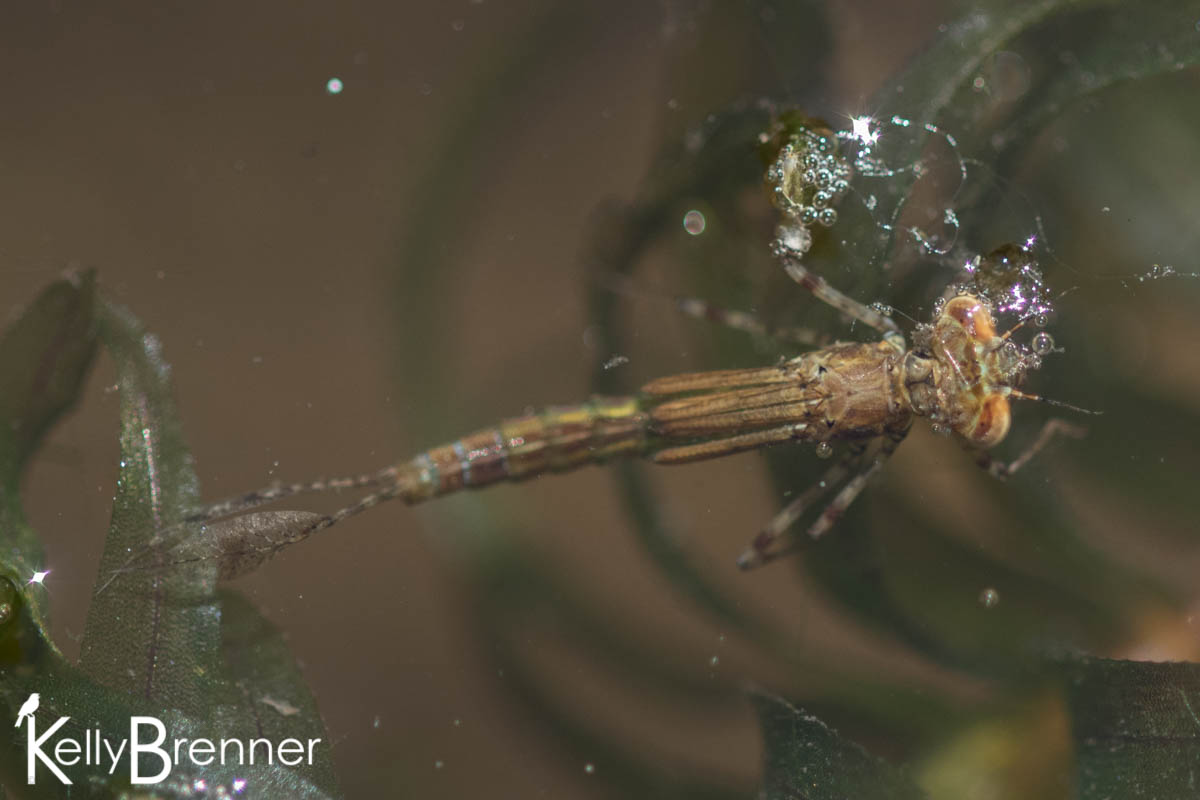 The weather has gotten progressively warmer and today was the warmest day yet. The morning started warm and by the time we got to the arboretum for summer school, I was already feeling the heat. I went for a slow and shorter walk and early on I heard a lot of noise in the leaves off the trail and it sounded a bit too much for squirrels or birds. I stopped and as my eyes adjusted to the dark gloom of the forest, I saw a face peeking around the side of a tree trunk. The masked face watched me before retreating up into the tree, it was a raccoon. It kept to the opposite side of the tree, peeking around several times to watch me before it finally went back down and ran away down the hill.

I decided to visit the dragonfly pond because it was already so warm in the morning and I walked down and saw the parks department had once again hacked the vegetation. There was a small patch of water lilies, but the bank vegetation had been given a crew cut. As I watched the single dragonfly flying around, I heard the crows start gathering around something up the hill, a sound I hadn’t heard in a long time. Not being one to ignore what the crow is saying, I followed the caws and immediately spotted a Barred Owl sitting easy to see on a branch. As I watched, the owl flew up the hill a little and I went around to the path the next level up to get a better look. Once up there, the owl was hard to see, even though it was only a few feet from the trail. The crow soon gave up, but the Dark-eyed Juncos and an Anna’s Hummingbird continued chipping until I was able to spot the owl, who was calmly having a preen.

I left the owl and returned to the pond to sit down. I first sat on the hillside watching the dragonflies, but there were not many. A couple darners, at least one Common Green Darner, were all I could see. I moved closer to the pond to see if the damselfly numbers were any better and I easily spotted them. They were much more plentiful than the dragons and I spotted a lot along the edge of the pond. I looked for snails in the vegetation to take home and put in our wetlands in a bottle and as I looked, I spotted a damselfly larva swimming around. I’d never seen one before and I watched it swim from plant to plant, and each time it climbed up to the plant’s surface. I guessed that because it wasn’t at the bottom of the pond it was looking for somewhere to emerge as a damselfly. My thought was each time it reached the top of the plant it dismissed it as a suitable place to emerge. Eventually I saw another damselfly larva doing the same thing and after awhile I saw yet one more. One of them was moving much slower than the others and I realized it didn’t have its gills. The area was rich with damselfly larvae. I was surprised how colorful they were. Their bodies were mostly brown, but there was some yellow and even a little bit of blue on their abdomen.

The original one I kept watching until it eventually swam towards the pond’s concrete wall where it finally hauled itself out of the water. It walked a short distance up the wall and then without pause, started to emerge. It was swift, taking little time to get the front half out. It then sat for a few minutes, rubbing its arms together. And then as my camera lost the focus, it quickly pulled the rest of itself out. I then watched it start to fill out, the abdomen getting longer and the wings doing the same. I noticed movement and saw two more emerging on the corner and one teneral, a newly emerged, sitting on the top of the wall.