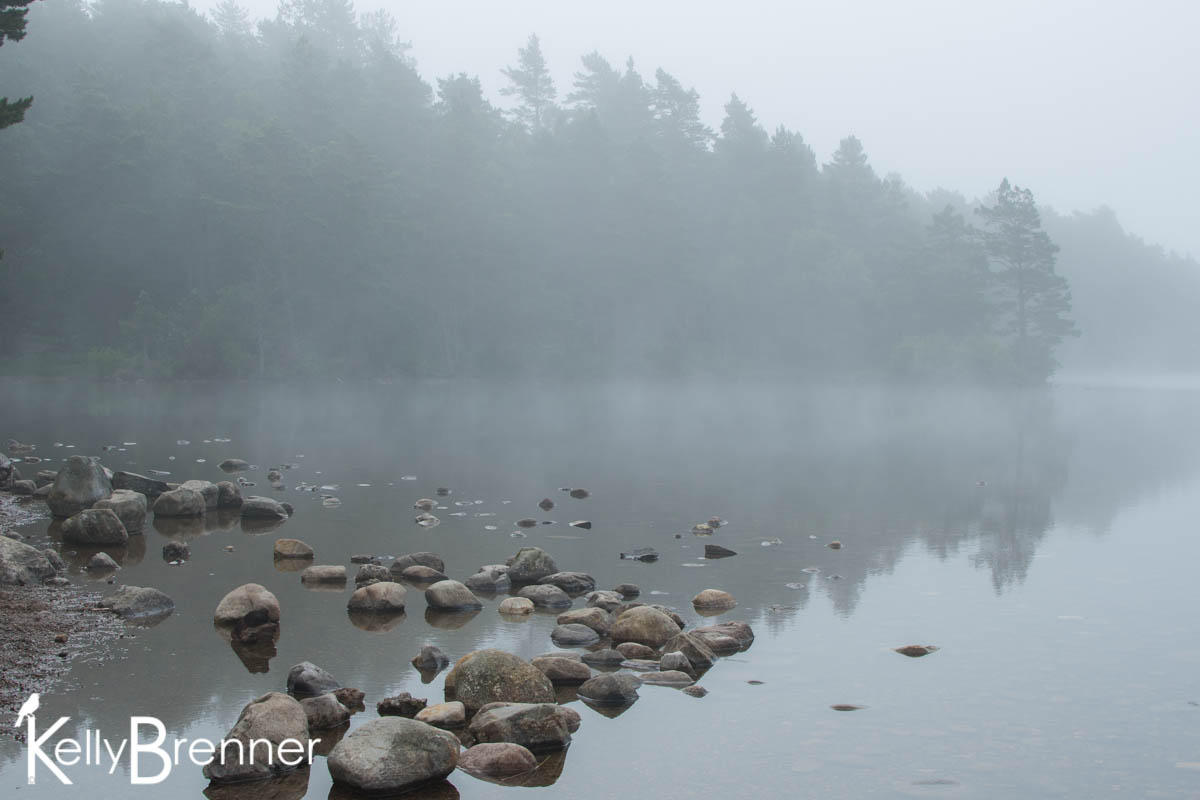 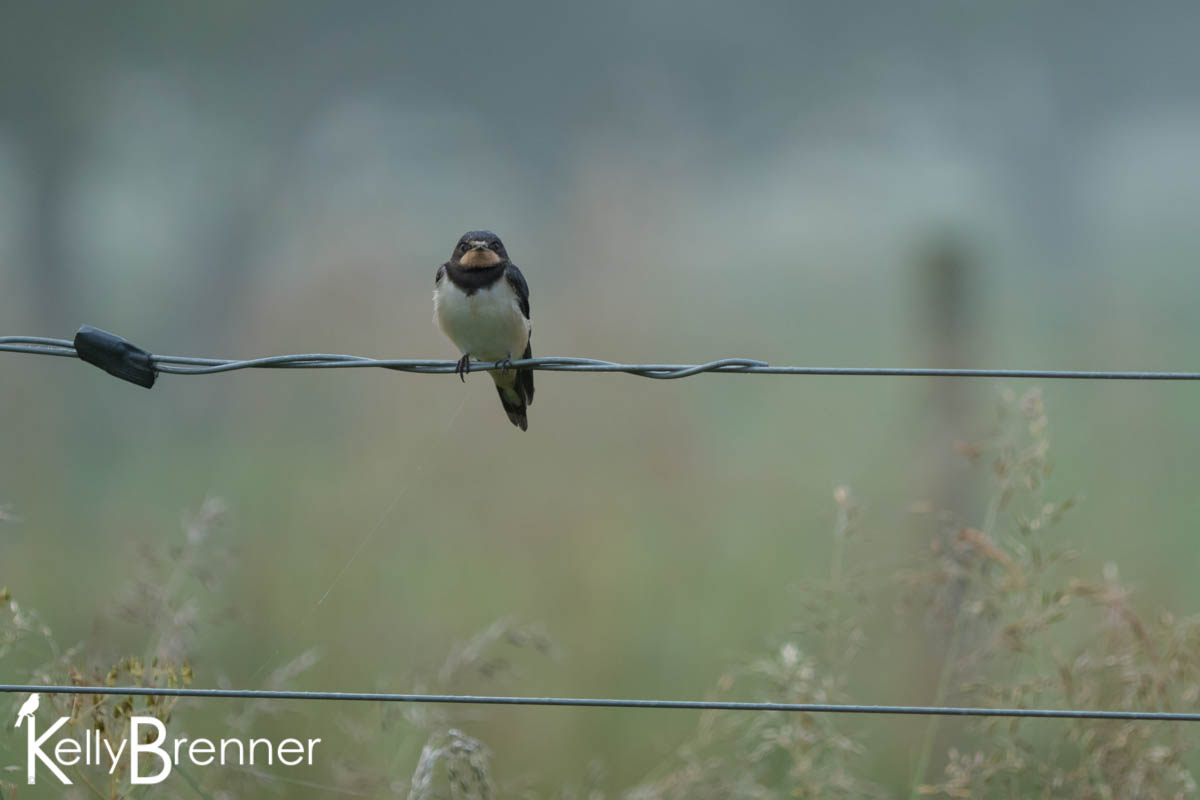 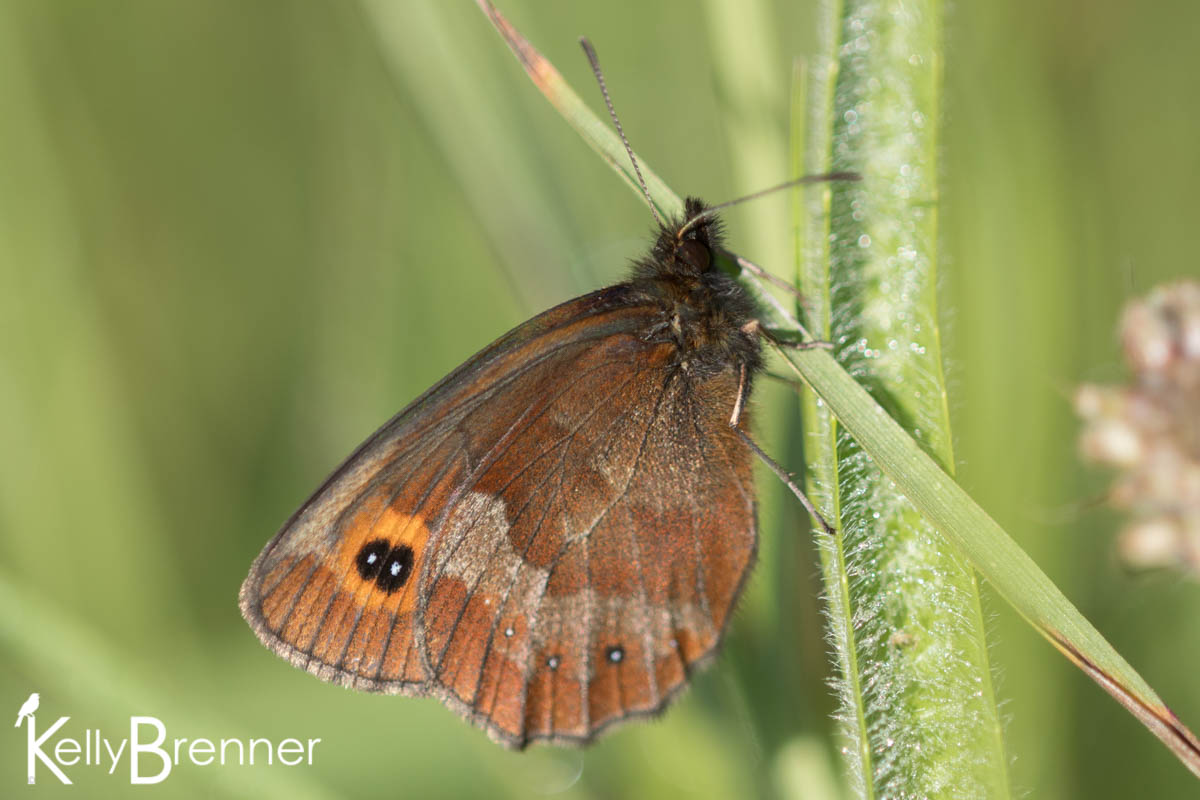 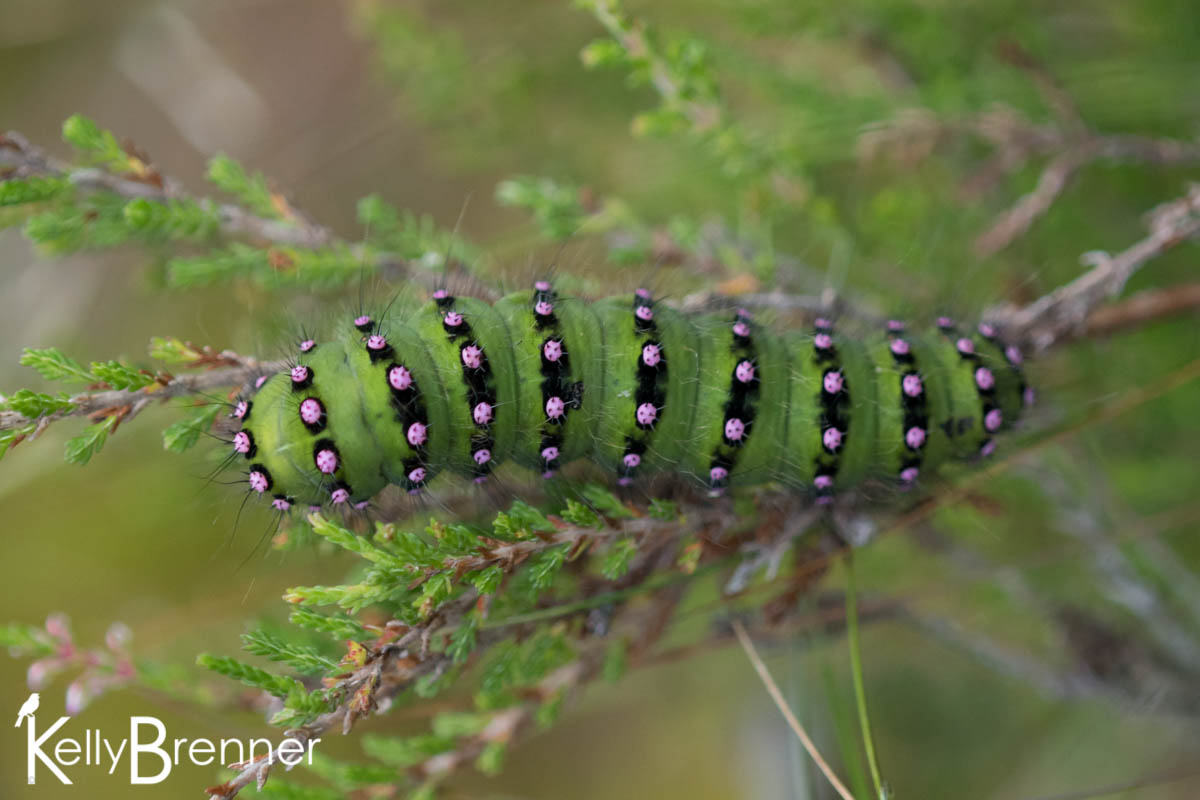 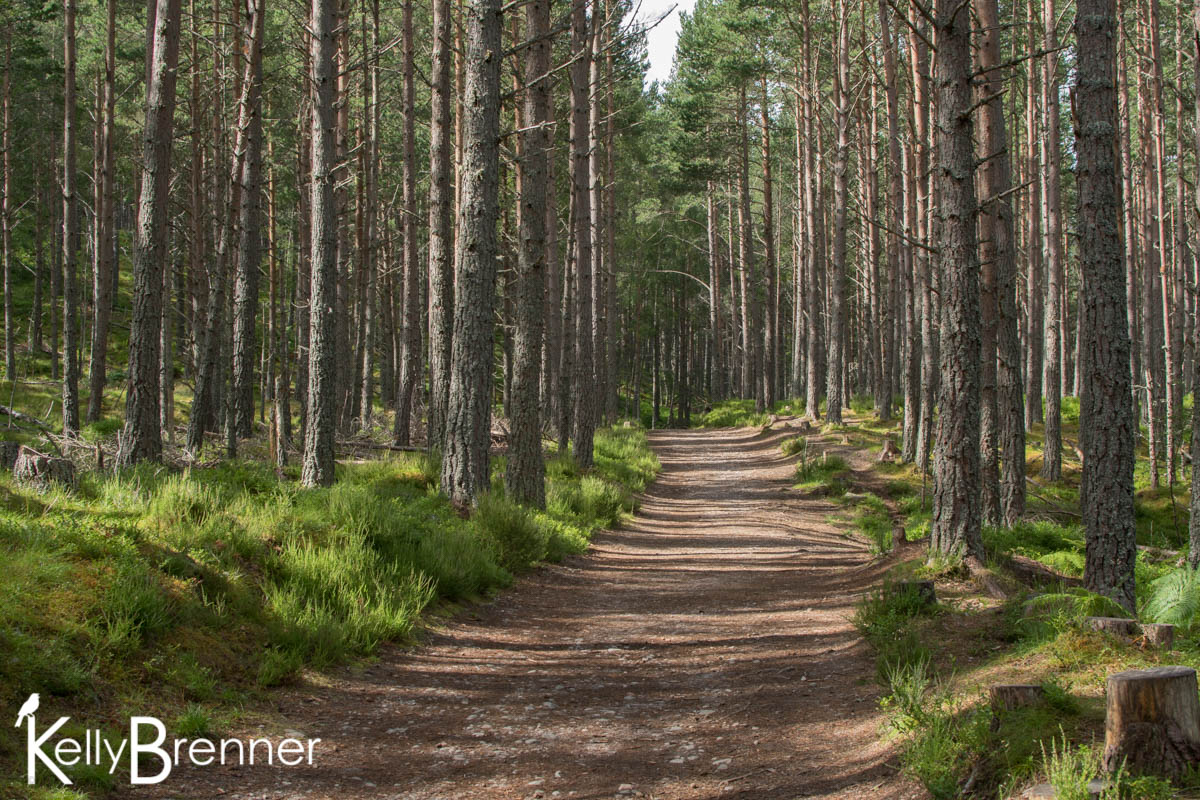 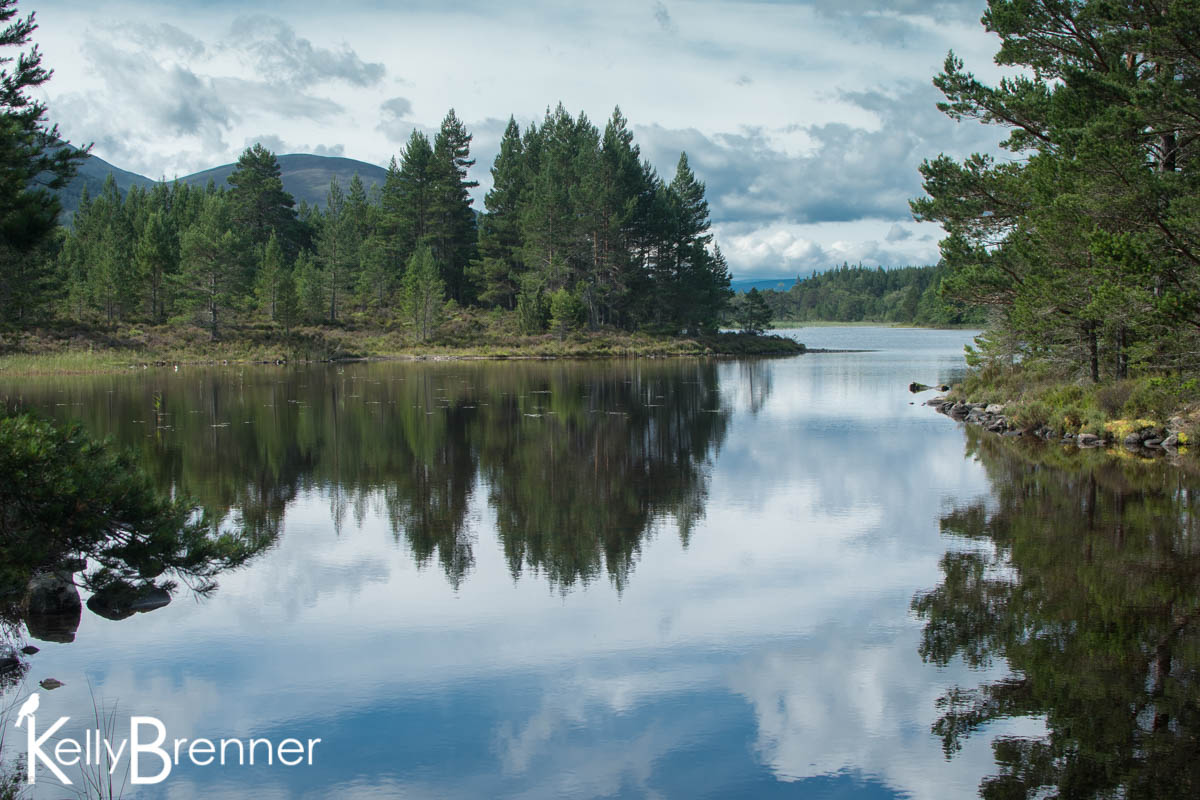 For the first time this trip, we awoke to a foggy morning. Since our plans today involved a walk around a loch, I was eager to get going to see a highland lake blanketed in fog. But before we left, I looked outside the windows around the cottage and much to my surprise, I spotted a Lapwing in the field across the railroad tracks. Naturally, as soon as I crept outside to take a photo it was scared away, but not before I caught a couple shots of it. The fog appeared to appeal to the birds and I spotted a swallow, Meadow Pipit and Willow Warbler all around the cottage.

We arrived at Loch an Eilein around nine in the morning and were greeted by a misty Scottish loch. On the rocks along the bank I saw a couple of Grey Wagtails. The trail led through a Scot’s Pine forest filled with the usual understory of heath and blaeberry and on the low growing plants were hundreds of silk webs. They were extremely easy to notice because they were all covered in morning dew thanks to the fog. A few were typical spider webs, but most were horizontal and not spun in a circle, but crisscrossed creating a flat platform web.

There were a surprising amount of mushrooms growing throughout the forest. We weren’t very far along before the sun starting burning through the clouds and I spotted a Scotch Argus butterfly along the path. Shortly after we spotted a the large caterpillar with black rows topped with pink spots, that was identified by Matthew Oates as an Emperor Moth. Just off the path next to a small pond I found a Common Frog.

We came across a flock of birds and I was happy to see Crested Tits among Chaffinches, Coal and Blue Tits and a Goldcrest and Treecreeper. Later on in another flock we saw Wrens, Long-tailed Tits and a Great Spotted Woodpecker. We didn’t see any Red Squirrels, but we saw a lot of signs of the squirrels in the form of pieces of pine cones on the ground and on stumps. 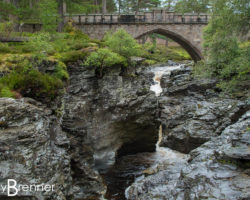 In 2016 I’m doing a 365 Nature project. Learn more about the project and see all the 365 Nature posts. While it hasn’t been sunny and warm in the highlands, at least it’s not rained on us…until today. Our luck finally 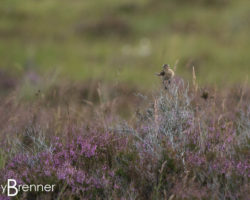 In 2016 I’m doing a 365 Nature project. Learn more about the project and see all the 365 Nature posts. The sun was shining in the morning and we had our most moths yet. There were about half dozen different moths